After five years of trial and error, it appears that a sea turtle that was rescued in Japan in 2008 will finally get a new pair of front limbs that were lost in what biologists think was a shark attack. Yu Chan, a 25-year-old loggerhead sea turtle (Caretta caretta) was fitted with a pair of rubber flippers that attach to her body via a cloth body suit that slips over her head and wraps around her shell. 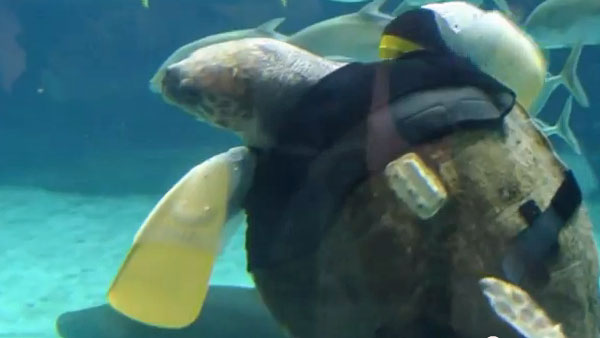 We have worked hard to design the vest in a way that prevents the turtle from taking it off unwittingly, Naoki Kamezaki, aquarium curator and director of the Sea Turtle Association, told Agency France Press. Ours may be the only case in which a turtle with artificial limbs is still swimming without a problem.

Yu has been at the Suma Aqualife Park in Kobe, Japan for the last five years, when she was brought to the park after she became entangled in fishing nets. When she arrived, she could only swim at about 60 percent of her normal capacity because half of one forelimb and 1/3 of the other was missing. The aquarium set out to design new flippers for the turtle and went through 28 different iterations before settling on a design that the designers feel don't hurt Yu as she swims. The Sea Turtle Association of Japan worked with the country's largest prosthetic limb manufacturer, Kawamura Gishi to come up with the design.

The loggerhead sea turtle has been on the endangered species list since 1978. They grow to about 7 feet in length and can weigh up to 300 pounds. They range from the Atlantic to the Pacific Ocean, the Indian Ocean and the Mediterranean Sea and reach sexual maturity at around 17 years of age. Their approximate lifespan is close to 70 years, though some have been known to live longer.

Want to learn more about these amazing creatures?