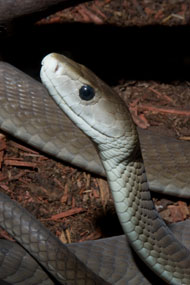 This snake is dangerously venomous. It is from the color of the mouth lining, not of the body, that this snake derives its common name. The olive brown to gray scales are smooth and of velvety appearance. Gray examples seem most common in the southern portion of the range. Appropriate for such a dangerously venomous snake, the elongate, flat-sided head is often referred to as coffin-shaped. When being defensive a black mamba will raise the forward third of its body and flatten its neck into a narrow but discernible hood, gape and hiss loudly. Hatchling and juvenile black mambas can be kept in terraria of 20 to 50 gallon capacity. An adult will require a minimum of a 125 gallon capacity and larger is better. The terrarium should be well ventilated and have a foolproof locking top. Fortunately, most captive black mambas will readily accept a small hidebox with a locking door (called a trapbox), easing the moving of the snake when the occasion arises. The trapbox will be most readily and continuously accepted if it is located in a quiet area of the cage and is always in the same place. Sturdy, well anchored, horizontal climbing limbs are usually readily used. To facilitate the handling of this dangerous snake the cage design should be simple but effective. This short profile is not the venue to describe safe handling techniques for a large mambaâÂ€”if, in fact, there are any. Certainly, once the snake is in its trapbox the careful closing and locking of the door and then the moving of the box is the safest of all methods. Barring that, the use of a clamp stick is the next safest method, but due to the speed, agility and size of this dangerous snake even the deft use of a clampstick is an accident in waiting. Seek the help of an experienced elapine keeper, heed all admonitions given, and be ready to invoke cautions of your own. A temperature gradient of several degrees should be provided. At the cool end of the terrarium a temperature of 74 degrees Fahrenheit is suitable but the warm end should be 84 to 86 degrees. A basking hotspot of 94 to 100 degrees will be utilized during thermoregulation. Cypress, fir, aspen chips or bark shards are excellent choices for a substrate. After locking your mamba in its trapbox feces can be removed with a small, long handled shovel. A large water bowl (kept scrupulously clean) should always be provided. The snakes will both drink, and if the receptacle is large enough, soak in the bowl. Keeping your snake well hydrated and its cage humidity fairly high will help assure complete, healthy sheds. Black mambas have a very high metabolism. They will require feeding twice a week. Hatchlings should be fed pinky mice. As the snake grows, so, too, should the size of the prey items increase. Adult black mambas can readily ingest and speedily digest a half to three quarter grown rat. Large adults will accept large breeder rats without mishap. Black mambas are active year around. It is probable that climatic cues such as photoperiod, ambient temperature and relative humidity stimulate ovulation. This oviparous snake produces between 8 and 15 eggs in a clutch. .