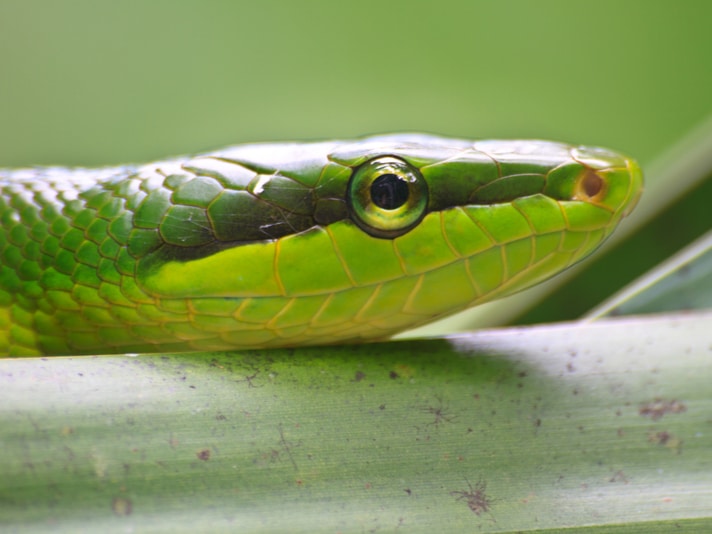 Care And Breeding Tips For The Red-tailed Green Rat Snake

Tips on caring for this semi-aboreal Southeast Asian snake.

The red-tailed green rat snake (Gonyosoma [Elaphe] oxycephala) is a thin-bodied, semi- arboreal species, which has an average adult length of 60 to 70 inches. There is not a notable sexual dimorphism in relation to size or color. Naturally endemic to Southeast Asia, red-tailed green rats range throughout Burma, Laos, Thailand, Vietnam, Cambodia, Indonesia, Singapore and Malaysia, and the Philippines. Animals available in the United States are predominately of Malaysian origin. This species is at home in warm, humid forest growth rich in bamboo, where its strong tail and muscular structure function perfectly.

The red-tailed green rat snake is available in a green, silver and brownish color, with a vibrant green being the most common color variety. I am not aware of a recording of gene transmission for these color varieties. It is worth noting that axanthic varieties of Indonesian animals exist in other species, and they are traditionally simple recessive by nature. While imported animals do not generally ever completely calm down, hatchlings produced in captivity will often calm down after their first year and become less defensive and subsequently less inclined to bite. Flightiness is to be expected, but calm, confident handling will eventually show the animal that you are not a threat.

As with all reptiles, hydration, cleanliness and proper temperature gradients for thermoregulation are paramount. Keep humidity between 70 and 80 percent, with occasional spikes two to three times per week that peak at around 100 percent. Offer cork-bark hollows stuffed with sphagnum moss or tight-fitting hide boxes filled with moss, moist paper towel or other humidity-retaining medium to give the animals a humid place to hang out. Proper humidity along with a temperature gradient helps keep your animals healthy and shedding properly. Despite coming from a warm, humid part of the world, these forest dwellers live under the canopy, often in trees where a breeze is prevalent. Offer an ambient temperature of 74 to 78 degrees Fahrenheit, with a basking spot of 86 to 88 degrees.

For substrate, many keepers use cypress mulch, corrugated cardboard, aspen or ground peat, or they skip substrate altogether. Whichever option you choose, just bear in mind that keeping a red-tailed green rat on dry, dusty bedding can increase the probability of a respiratory infection, and keeping your snake on overly wet bedding can induce skin infections and sores. Both extremes will foster ill health. For the best results, monitor their environment and maintain the previously mentioned parameters.

For enclosure size, adults will fair well in a cage measuring 36 inches long, 18 inches wide and 30 inches tall, if kept individually. Pairs should be offered a cage measuring at least 48 inches long, 18 to 24 inches wide and 36 inches tall. Subadult and adult red-tailed green rat snakes will generally grow accustomed to a diet of freshly killed or frozen thawed rodents off of hemostats. Offer food every seven to 10 days. Increase to every five days for females approaching a reproductive cycle. Avoid offering live rodents, as these can injure your snake.

Offering a nighttime drop in temperature of approximately 7 to 10 degrees has proven successful to induce breeding, but is not required. This cooling process is traditionally begun near Thanksgiving and ended around New Year's Day. Some breeders believe that this is the only way to induce a female to produce follicles; others think that as long as a proper gradient is offered to healthy adult animals, they will cycle on their own.

Regardless of which philosophy you espouse, increasing a female's food availability before reproduction is still a good move (as stated, feed females every five days if they're approaching a reproductive cycle). If you force a breeding season through temperature manipulation, the pair should be separated and introduced once they have been brought back up to normal temperatures. Following the traditional breeding cycle, expect eggs around April or May. You can house a pair together year-round (be sure to separate them when feeding) and theoretically end up with three to five eggs any month of the year. Multiple clutches per year are common with well-established pairings.

After ovulation, the female will shed and lay her clutch of eggs approximately 60 days afterward. Remove the eggs gently, keeping the same orientation as you found them. Place them in an incubator with a medium of perlite and water. The ratio of each should be 1:1 by weight. Eggs should be placed on the substrate, not buried into it, as is commonly done with other reptile eggs.

Incubation takes between 110 and 130 days at approximately 77 to 79 degrees. Offering a peak in humidity of around 80 percent throughout incubation may help avoid egg mortality during incubation. A spike can be facilitated by placing paper towels – soaked in tepid water and then wrung out – around, but not touching, the eggs.

Many keepers have incubated red-tailed green rat snake eggs in the mid 80s with success, but it is reported that higher incidents of malformed and dead-in-egg offspring occur when incubating at these higher temperatures. Be willing to learn from your animals and adjust your husbandry to meet their needs. Connect with other keepers and trade information. The more you research the animals you keep and pay attention to them, the more you – and your red-tailed green rat snakes – will get out of the experience.