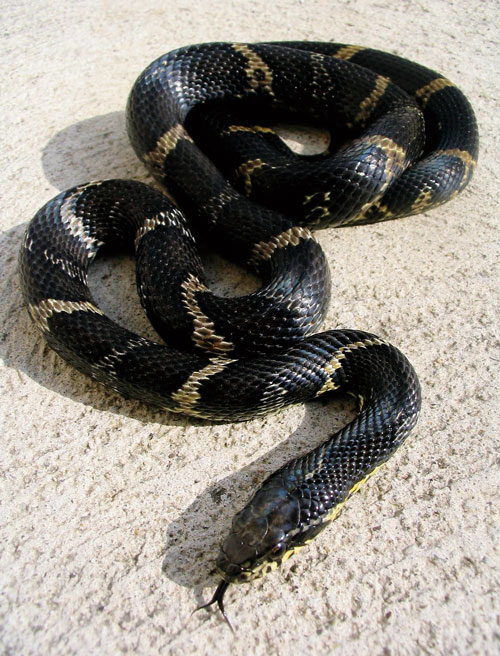 Many captive snakes, such as boas, pythons, kingsnakes and milk snakes, live sedentary lifestyles. Most of their time is spent in the safety of hide boxes or buried under substrate. In captivity there is no need for them to hunt for food or feel concerned about predators. They seem to relax and take their captive lifestyle in stride. This isn’t exactly a bad thing. It’s one reason snakes are excellent low-maintenance pets.

As an alternative, snakekeepers may want to consider the Russian rat snake (Elaphe schrencki schrencki). Growing to a significant size, this subspecies has a strong inclination to climb. Russian rat snakes make fascinating display animals, especially when kept in a seminatural vivarium. They don’t mind hanging out in plain sight, and they exhibit an awareness of their surroundings that’s a refreshing change from many other popular snakes. Many snakekeepers would say they have personality.

Russian rat snakes may very well be the ugly ducklings of the serpent world. Juvenile Russian rat snakes are clad in brown or gray with light cross-bands. They are rather dirty-looking and, unlike most captive-bred snakes, can hardly be called attractive.

As adults, Russian rat snakes are usually black or dark brown with yellow or cream bands. In a way, their markings look like an eastern kingsnake with one significant difference: the bright yellow that often adorns an adult’s face. This coloration, particularly on the upper and lower labial scales, gives these snakes eye-catching contrast.

Besides its contrasting markings, the Russian rat snake’s size makes it an impressive animal to behold. It can attain an adult length of 6 feet and has been known to occasionally reach 8 feet.

I can relate. The first time I handled a young Russian rat snake, I noticed an immediate difference in its behavior. Rather than wrapping around my fingers and assuming a defensive stance like any self-respecting American rat snake, the young Russian slithered backward and never made any attempt to stand its ground. As someone who has bred Texas rat snakes for several years, I found this snake’s complete lack of a nippy disposition to be a welcome attribute.

For their size, these Russian rat snakes rarely take large food items. Preferring small rats or even a few rat pups as a meal, some will not touch adult rats. This is probably because the snakes sometimes don’t constrict their food, even in the wild. Instead they often throw a coil over their prey, pin it down and eat it alive.

As far as keeper interaction goes, once a Russian rat snake’s cage lid has been removed, it usually plots ways to climb onto your hand. These reptiles are curious and personable. Although it can be unnerving to have a large snake enthusiastically approach you, I’ve never known a captive-bred specimen of this subspecies with any inclination to bite. They seem to thoroughly enjoy climbing all over their keepers.

Several Russian rat snake owners also have remarked that the snakes appear to be intelligent. Diurnal and seemingly fearless, they demonstrate an increased awareness of their surroundings compared to other commonly kept snakes. One of the most enjoyable aspects of keeping them is that they perch on a climbing branch and seem to observe what’s going on around them. If I’m cleaning cages in my snake room, my Russians watch with interest the whole time.

Native to eastern Asiatic Russia, northeast China, and parts of Korea and Mongolia, Russian rat snakes are often found in the areas around the Amur River. They seem to prefer wetlands, but they can be found in several habitats, including sparsely vegetated areas, farmlands, rocky hillsides and woodlands. Like many snakes, they show a preference for forest edges and clearings.

Russian rat snakes have a very short active season in the wild. Subject to long, cold winters, they may only be out from May through September in some parts of their range.

I keep my adult Russian rat snakes in tanks measuring 3 feet long, 1½ feet wide and 2 feet tall; however, these snakes would appreciate a taller cage with suitable climbing materials because they often climb. Newspaper, aspen bedding or wood chips may be used as the substrate.

Place multiple hides around the enclosure. One should be in the warm end, one should be in the cool end, and one should be between them. At night, the Russian rat snake will select a hide box closest to the temperature it needs, but they are rarely used during the day. These snakes also occasionally soak, so provide a water bowl large enough for them to fit.

Given their natural origins, it should come as no surprise that Russian rat snakes like fairly cool living conditions. Keep the ambient temperature around 75 degrees Fahrenheit, the cool end between 70 and 72 degrees, and the warm end between 80 and 82 degrees. An undertank heater or basking spotlight can help with the warmer temperatures.

Russian rat snakes have a habit of basking while in a shed cycle. During such times they bask almost exclusively and rarely move from their heat source. If you’re using a light bulb, be sure to include a bulb guard. Russians, as well as other snakes, will quite happily climb on a hot light.

Because Russian rat snakes are often found in wetlands, a moderate humidity level is best. I have yet to experience shedding problems with these snakes. A large water bowl seems to cover their humidity requirements.

Because of the short activity season in their natural habitat, Russian rat snakes have adapted to grow quickly, and they seem to have a higher metabolism than other popularly kept snakes. Their preference for smaller food items also dictates a more frequent feeding regimen than corn snakes or kingsnakes. Growing Russians can be fed every three days, and they often eat while in a shed cycle. Hatchlings and yearlings are fed one rodent per feeding. Subadults and adults are fed up to three food items at a time.

Russian rat snakes often go off feed in late summer or early fall, which also may stem from their native origins. They can usually be tempted with small mice or fuzzy rats, but you may want to consider brumating them if they refuse to eat.

It can take female Russian rat snakes four to five years to reach maturity. Males of this subspecies can breed at a younger age.

The Russian rat snake will not breed successfully without brumation. I hibernate mine at a temperature of 47 to 52 degrees for three months, though some breeders recommend a cooling period of five months. Even at these low temperatures the snakes are generally active, but they’re very slow in movement.

Don’t feed Russian rat snakes for two to three weeks before brumation to ensure that their stomachs are empty. Gradually lower temperatures over a few weeks until they have reached brumation level. To bring them out of brumation, I simply plug in the heat pad and leave it on. The basking light I leave on for eight hours a day, and I gradually increase the photoperiod over four months until it reaches 14 hours a day by the middle of June.

After brumation, six to 12 eggs are typically deposited. I use the ambient temperature (82 degrees) to hatch colubrid eggs rather than an incubator. For an egg box, I use a plastic container with holes drilled into it. It should be large enough to comfortably fit the eggs, which are half-buried in damp perlite. Enough of the Russian rat snake egg must remain above the substrate to allow it to breathe. Eggs hatch in 40 to 60 days.

Raising Russian rat snakes is similar to the husbandry of commonly kept kingsnakes, milk snakes and other rat snakes. Hatchlings can be kept in a rack system. I keep mine in boxes measuring 12 inches long, 7 inches wide and 3 inches tall. Heat tape, a couple hide boxes, a water bowl and newspaper substrate are essential cage furnishings. This setup will suit the young snake for the first six months or so of its life. As they grow, their enclosure size must as well.

These hatchling Russian rat snakes readily take pinky mice after their first shed. They should be on fuzzy mice by the time they reach 1 year old.

Russian rat snakes have often been called the friendliest of large snakes. They make a great pet for snakekeepers who have tried their hand at corn snakes and kingsnakes and are looking for something a little different. Although Russians have a shorter activity period than most other snakes, they make up for it by exhibiting behavior and interactivity that makes them a favorite with those who keep them.