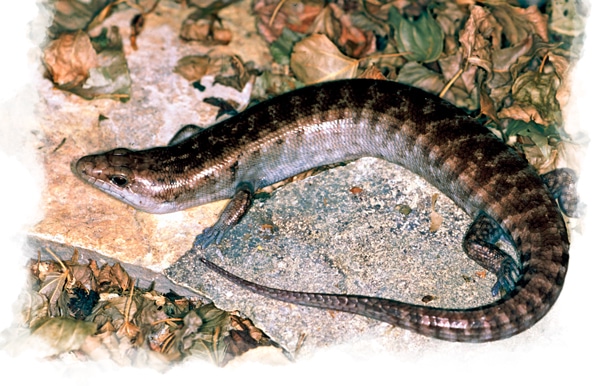 Galliwasps are slick, fast and don’t really like to be held. They require secure hides. A 20- to 40-gallon terrarium makes a good start. Cover the bottom of the tank with about 4 inches of ground up coconut coir. These guys like to burrow, so a nice, deep substrate is desired. At one end of the enclosure, place a shallow water bowl that’s large enough for your galliwasp to sit in and soak. Water should be changed daily. Hides are important, and variety is nice. Lay a flat board, piece of cork bark or other such item flat on the substrate. Add additional cork rounds or commercial hides. There is no such thing as too many hides for a galliwasp. Include some plastic plants for a nice realistic touch. Branches may look nice, though it’s doubtful they will be used much. At the other end of the enclosure, opposite the one with the water bowl, place an under-tank heat pad. Although the depth of the substrate will “muffle” the heat, the pad will help to create a hot spot in the enclosure. Use a secure screen top to keep your pet from wondering off, and on top of the screen, over the heat pad, place a heat lamp. You want to establish hot spot of about 90 degrees Fahrenheit in the area above the heat pad, using the heat from above and below. The ambient temperature of the rest of the tank can be around 75 to 80 degrees. Place a highly rated UV lamp/fixture over the screen top, one that runs the length of the tank. All lights should be turned on in the morning and off at night. Leave the heat pad on 24/7. Spray the substrate with water every few days to keep up moisture and humidity. This helps make burrowing easier, too, and will also help your galliwasp to shed properly and completely — especially those delicate toes. In the wild, galliwasps will feed on any small invertebrate. They will also take small vertebrates such as rodents and hatchling birds. In captivity they feed very well, and have taken pinky and fuzzy mice (dead), night crawlers, crickets, roaches, ground turkey, canned monitor diet and canned dog food. They are very secretive, so I rarely see them actually eat, but the food is usually completely gone the next day, no matter what has been offered. They are not picky eaters at all. I supplement with calcium and multivitamins; calcium three times a week on feeder insects and prepared diets, and multivitamins about once per week. Galliwasps from Haiti are not commonly offered or found, but can show up once in awhile. For the most part, though, they are scarce. Although not as colorful as some of their Mesoamerican relatives, these sturdy and robust anguine lizards, when available, are usually moderately priced. I know of no morphs out there, but pattern and color can vary a bit. You can find galliwaps, if you’re lucky, at reptile shows, on the internet and at select specialty reptile stores. Most offered are captive bred, although a few field-collected specimens do squeak out of Haiti now and then. Although captive breeding has had a great degree of success, the future for these lizards in the wild is questionable. Their numbers have been reduced greatly. Celestus warreni is currently listed as critically endangered on the IUCN Red List, due to estimates of up to an 80-percent loss in population over the past 20 years. It is doubtful that any galliwasps still exist on the Dominican side of the island. The last stronghold appears to be northern Haiti, but this population is also threatened and at great risk. Habitat loss accounts for most of the trouble. Deforestation for agricultural use is a major problem, and there is no let up in sight. Most Hispaniolan forests are gone. It is sadly only a matter of time now. Galliwasps live in fragmented forests surrounded by people and food crops. Local people fear the lizards are venomous and usually kill them on sight. I usually advocate acquiring only captive-bred animals for pets, but in some cases, removing animals from such an area is logical, and possibly the only chance for a species such as this one to survive. The wild habitat is going or gone, and at least we can keep the species alive in captivity. That’s my 2 cents’ worth, anyway. Giant galliwasps are not for everyone.  They are fast, very slippery and hide a lot.  They do tend to bite when threatened or grasped.  They just don’t like to be messed with.  Because of their tendency to like to hide under stuff, they are not the best display animals, either. Yet, they are a treat to own.  Although not real touchy-feely, they are very cool. Extra Info: The origin of the word “galliwasp” is unknown.  Ken Foose produced his first captive-bred snakes at age 11. With a Master’s Degree in zoology, he has been both a zookeeper and curator. He opened Exotic Pets, which specializes in reptiles and amphibians, in Las Vegas in 1991. He is currently president of the International Herpetological Symposium.

The island of Hispaniola, consisting of the countries of the Dominican Republic and Haiti