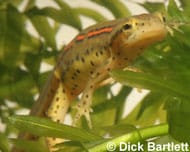 Three species of newts found in the eastern and central United States are all referred to as “Eastern Newts.” The three species are the very uncommon and locally distributed striped and black-spotted newts (found in the southeastern US and Texas, respectively), and the common eastern newt. There are four subspecies of the eastern newt, which are all common and widely distributed, and are most commonly thought of as eastern newts. Based upon overlapping characteristics, a recent study has suggested that the subspecies of the eastern newt should no longer be recognized. Fortunately, this suggestion has been widely followed by neither herpetologists nor herpetoculturists. The subspecies of the eastern newt are: Red-Spotted Newt (N. v. viridescens), Central Newt (N. v. louisianensis), Broken-Striped Newt (N. v. dorsalis), and Peninsula Newt (N. v. piaropicola). Adults of the four subspecies defined: Red-Spotted Newt: the most northeasterly subspecies; olive dorsal color, black-spotted yellow belly; red dorsolateral spots prominently edged in black. Central Newt: occurs in the central states and along the Gulf Coast and southeastern coastal plain; olive dorsal color, black-spotted yellow belly; red dorsolateral spots sometimes edged in black. Broken-Striped Newt: found in southeastern North Carolina and northeastern South Carolina; olive dorsal color, black-spotted yellow belly; red dorsolateral markings in the form of broken red stripes that are partially to completely edged by black. Peninsula Newt: restricted to peninsula Florida; olive-black dorsal color, black-spotted olive-yellow belly; no red dorsolateral markings. The skin secretions of eastern newts are quite toxic. Wash your hands both before and after handling any newt. The life cycle of newts is complex, having both an aquatic and a terrestrial stage. But where climatic conditions allow, the life of the eastern newt is even more complex. Courtship and breeding are accomplished in the water by the aquatic adults. Females attach the eggs to water plants. Following successful incubation, externally-gilled aquatic larvae emerge from the eggs. Developmental durations in all stages of an eastern newt’s life—egg, larvae, eft and adult—are highly variable and are at least largely dictated by ambient temperatures. Life stages durations: Incubation: 2 to 6 weeks Larval stage: 2 to 6 months Eft (terrestrial stage): if moisture conditions are suitable, 2 to 4 years; bypassed if moisture levels are not conducive to terrestrial existence. If the eft stage is bypassed the newt may attain sexual maturity while in the larval form (neotenic) or transform directly to the aquatic adult stage. Adult: 10 to 25 or more years Because they are small and slender, from one to several eastern newts may be kept in a 10 gallon set up. A heavily planted aquatic setup is suitable for adults. Filtration helps but is not mandatory. Periodic partial or full water changes should be made. A cool, moist, mossy woodland setup is best of the terrestrial eft stage. Cleanliness is mandatory. Because adults are often seen in the aquaria of tropical fish dealers, hobbyists are prone to believe that newts are warm water caudatans (the terrestrial efts are less commonly offered). While it is true that eastern newts from the southernmost locales of the range are able to withstand water temperatures in the 80s (degrees Fahrenheit), whether the newts are in their terrestrial or aquatic stage, temperatures in the low 70s would be much more suitable for all subspecies. Of the four subspecies it is the peninsula newt that is able to tolerate the warmest temperatures for the longest periods. Eastern newts (like all newts) are carnivorous. While adults will accept both live and prepared foods, efts are inclined to eat only live food. Adults may be fed daphnia, black worms, tubifex worms, white worms and diced earthworms. Efts eagerly accept small isopods and pinhead crickets as well as pesticide-free aphids and termites. .