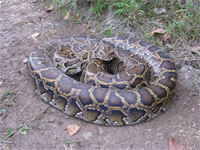 Man Gets Bit By Apparent Venomous Snake, Refuses To Get Treatment And Dies
Man Holds Snake as Pomeranian Tries to Attack It
Salmonella Outbreaks Linked To Undersized Turtles

A federal bill that would affect the python trade if passed gets its second committee hearing next week, and organizations representing herpkeeping interests are gearing up for it.

H.R. 2811, the House version of Senate bill S. 373, is scheduled to be heard before the House Judiciary Subcommittee on Crime, Terrorism and Homeland Security on Friday, Nov. 6.

In July the U.S. Association of Reptile Keepers worked with members of the House Judiciary Committee to offer an amendment limiting the scope of H.R. 2811 to only two snake species: Burmese pythons and African pythons. Several sources have suggested the subcommittee hearing on Nov. 6 will consider the amended version of the bill.

According to the Pet Industry Joint Advisory Council, the hearing will be largely focused on a 302-page risk-assessment report recently released by the U.S. Geological Survey. The report estimates the ecological risks associated with U.S. colonization by nine large constrictor snakes: green anacondas (Eunectes murinus), Indian or Burmese pythons (Python molurus), African pythons (Python sebae), reticulated pythons (Broghammerus [Python] reticulatus), boa constrictors (Boa constrictor) and four look-alike species. The report also states that, at present, the only probable pathway by which these species would become established in the United States is the pet trade.

In an Oct. 30 Pet Alert, PIJAC stated it was conducting an in-depth review of the report, but it already had issues with its methodology. PIJAC also said it was submitting to the House subcommittee a proposed federal-state mechanism for Burmese pythons listed as injurious under the Lacey Act, and it could be used as a model if other snake species are included.

Also preparing for the subcommittee hearing, USARK is planning a phone, fax and e-mail campaign leading up to the hearing. According to USARK, the group also might be invited to present testimony before the subcommittee as an expert witness.

USARK is also trying to convince bill sponsors and subcommittee members to further limit the scope of H.R. 2811 to only the importation of Burmese pythons and African pythons. USARK President Andrew Wyatt said in his ReptileChannel.com blog that this would allow the captive-bred trade and export of these snakes to continue. Legislators have agreed in principle to further amend H.R. 2811, he wrote, but “to date that promise has not been kept.”