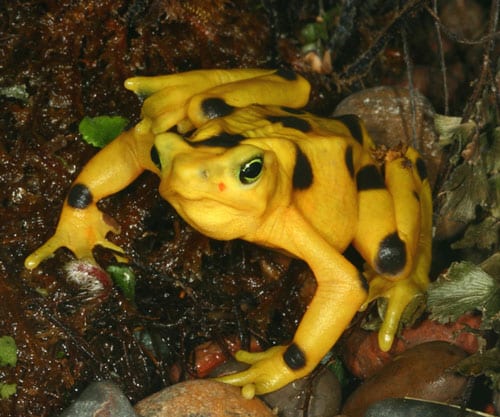 Important new information about frog deaths has come to light.

Amphibian populations have been in steep decline for years (for some background, read Jamie Reaser’s article “Under Fire”). Why remained a mystery for some time, until the chytrid fungus Batrachochytrium dendrobatidis was discovered to play a role. Exactly how it was killing frogs was unknown, but some new research has revealed some important new information.

An article in USA Today reports that researchers at the Amphibian Disease Ecology Group at Cook University in Australia have learned that it all has to do with electrolytes. The chytrid fungus prevents affected frogs from being able to regulate them. When the body’s ability to regulate electrolytes is out of whack, cardiac arrest can result. The article states that what’s happening with the frogs is similar happen to human athletes who exercise too vigorously in hot weather and who lose excess amounts of salt and water through their sweat. Now I’m paranoid about being more careful when jogging. I’ll have to be sure to drink plenty of electrolyte-packed Gatorade to prevent keeling over.

The team at Cook University conducted tests on sick frogs and discovered that their electrolyte levels were very low. They were then provided electrolytes via a solution, and they perked up. Unfortunately, the frogs still ended up succumbing to the infection. Despite the fact that the frogs still died, hopefully the newly discovered “electrolyte connection” will result in new revelations that will be used to someday slow or halt the continuing decline of frog populations.