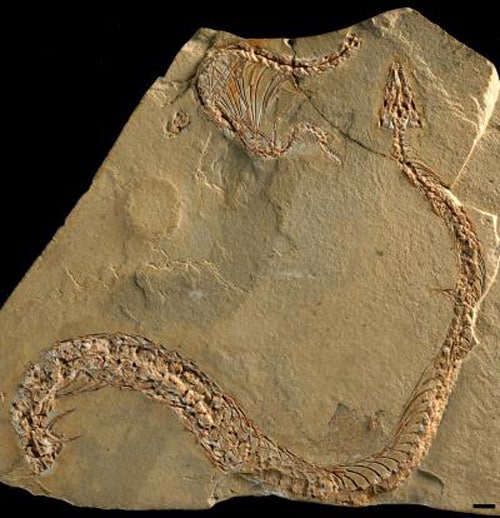 X-rays reveal the hidden leg of a fossilized snake.

An X-ray imaging technology is helping scientists to better understand how snakes lost their legs during the course of their development. The researchers said they hope the new data will serve to resolve a heated debate about the origin of snakes: whether they evolved from a terrestrial lizard or creatures that lived in the oceans. New, detailed 3-D images have revealed that the internal architecture of one ancient snake's leg bones strongly resembles those associated with modern terrestrial lizards.

The team of researchers was led by Alexandra Houssaye from the Museum National d'Histoire Naturelle (MNHN) in Paris, France, and included scientists from the European Synchrotron Radiation Facility (ESRF) in Grenoble, France, where the X-ray imaging was performed, and the Karlsruhe Institute of Technology (KIT), Germany, where a sophisticated technique and a dedicated instrument to take the images were developed.

Only three specimens of fossilized snakes with preserved leg bones have been found to date, worldwide. Eupodophis descouensi, the ancient snake studied in this experiment, was discovered 10 years ago in 95 million-year-old rocks in Lebanon, in the Middle East. About 20 inches long overall, it exhibits a small leg, measuring under an inch long, attaching to its pelvis.

This fossil is key to understanding the origins of snakes, as it represents an intermediate stage when ancient snakes had not yet completely lost the legs that they had inherited from their lizard ancestors.

Although the fossil exhibits just one leg on its surface, a second leg was thought to be concealed in the stone, and indeed, this leg was revealed in full detail, thanks to synchrotron X-rays.

The high-resolution 3-D images, in particular the fine detail of the buried small leg, suggest that this species lost its legs because they grew more slowly, or for a shorter period of time. The data also reveal that the hidden leg is bent at the knee and has four ankle bones but no foot or toe bones.

"The revelation of the inner structure of the hind limbs of Eupodophis enables us to investigate the process of limb regression in snake development," Houssaye said.

The scientists used “synchrotron laminography,” a recent imaging technique specially developed for studying large, flat samples. It is similar to the computed tomography (CT) technique used in many hospitals, but relies on a coherent synchrotron X-ray beam to resolve details a few micrometers in size — some 1000 times smaller than a hospital CT scanner.

For this new technique, the fossil is rotated at a tilted angle in a brilliant high-energy X-ray beam, with thousands of 2-D images recorded as it makes a full 360 degree turn. From these individual images, a high-resolution, 3-D representation is then reconstructed, which shows hidden details such as the internal structures of the legs.

"Synchrotrons, these enormous machines, allow us to see microscopic details in fossils invisible to any other techniques without damage to these invaluable specimens," explains Paul Tafforeau of the ESRF, a co-author of the study which has been published in the Journal of Vertebrate Paleontology.