The Lake Erie Watersnake (Nerodia sipedon insularum) has been removed from the Federal List of Endangered and Threatened Wildlife by the U.S. Fish and Wildlife Service, due to it rebounding from the threat of extinction in areas in which populations declined. It is the 23rd species to be removed from the list due to recovery efforts. 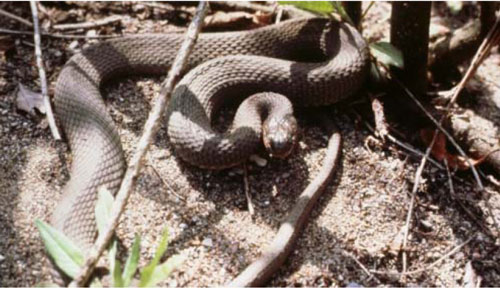 The Lake Erie watersnake grows to about 1 1/2 to 3 1/2 feet in length and looks like the northern watersnake, which it is closely related. It traditionally feeds on amphibians and fish such as madtom, stonecat, logperch, and spottail shiners.

The non-venomous snake, native to the offshore islands in western Lake Erie, was listed as endangered in 1999 due to intentional killing and loss of shoreline habitat to development. In 2003 a recovery plan was finalized and put into place to protect the snake's habitat and to educate the public in an effort to reduce the threat to the animal. The snake was delisted when its population reached a count of 5,555 snakes on the island, the population number was maintained for six years, and its habitat was successfully protected. In 2009, the population of the Lake Erie watersnake reached 11,980 animals. More than 300 acres of inland habitat and 11 miles of shoreline are now protected because of the snake's appearance on the list.

Various agencies, including Northern Illinois University, the Lake Erie Islands Chapter of the Black Swamp Conservancy, Western Reserve Land Conservancy, Put-in-Bay Township Park District, the Cleveland Museum of Natural History, and The Ohio State University Stone Laboratory worked with the Ohio Department of Natural Resources Division of Wildlife to minimize the threats to the snake and to protect its summer and hibernation habitat. The actions of these organizations proved instrumental to the success of the species, according to a report published on the Department of the Interior's website. The snake is still listed as endangered by the state of Ohio, making it illegal to kill them under Ohio state law.

The Lake Erie watersnake grows to about 1 1/2 to 3 1/2 feet in length and looks like the northern watersnake, which it is closely related. It traditionally feeds on amphibians and fish such as madtom, stonecat, logperch, and spottail shiners. During the 1990s the round goby, an invasive species, decimated the local populations of these fish, and 90 percent of the watersnake's diet today is round goby, with 10 percent being mudpuppies and native fish. The range of the Lake Erie watersnake includes islands in western Lake Erie, and habitat on the Catawba/Marblehead peninsula in Ohio. They are also found on Ohio's mainland, Mouse Island, and Johnson's Island. These animals were not protected under the Endangered Species Act.

The rule on the Lake Erie watersnake will be published in the Federal Register on August 16, 2011, with the full delisting of the snake taking effect September 15, 2011.

A copy of the final rule can be obtained at the Fish and Wildlife service website.

More information on the Endangered Species Program can be obtained here.