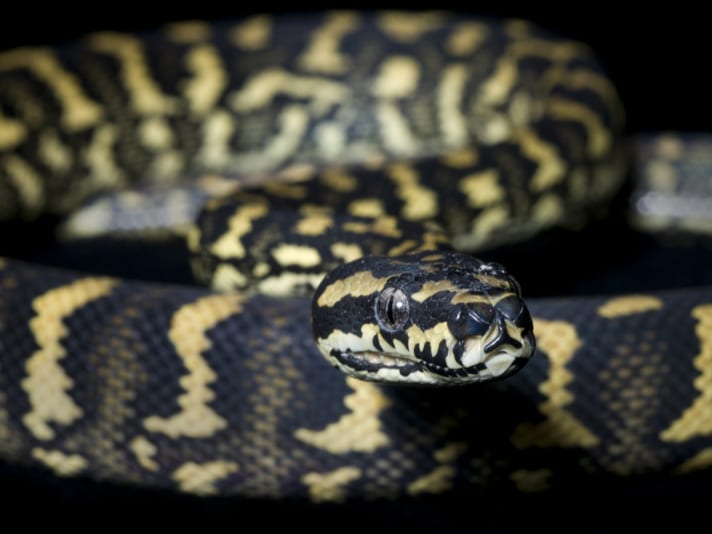 How to find and care for a jungle carpet python.

It’s easy to understand why jungle carpet pythons are growing in popularity. With their pattern of vibrant yellow stripes against a deep, velvet-black background, these pythons live up to their namesake and look like a fine Middle Eastern carpet, a piece of art. Given that there are a lot of jungle carpets out there, with a wide variety of colors and patterns, how do you acquire and care for that jungle with the dazzling yellow-and-black appearance? This article will give you a road map for doing just that. 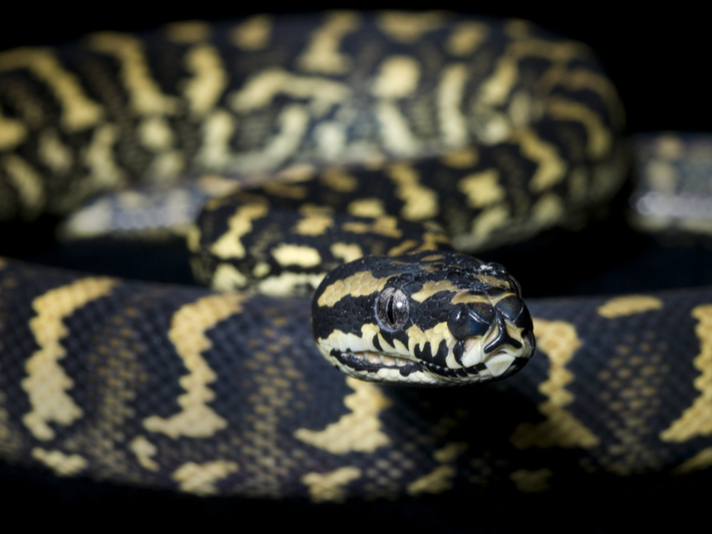 The jungle carpet python subspecies (Morelia spilota cheynei) are native to a small region of the northwestern Australian rain forests.

Carpet pythons in general belong to the Morelia spilota species and include a diverse group, such as diamond pythons, coastal carpet pythons, Irian Jaya pythons and jungle carpet pythons. The jungle carpet python subspecies (Morelia spilota cheynei) are native to a small region of the northwestern Australian rain forests. They are a slender, mostly arboreal python, and adults generally grow to a length of 5 to 7 feet. In the wild, they rarely have the striking black-and-yellow appearance seen in the trophy specimens found in captive collections. Given that no pythons have been legally exported from Australia since the 1970s, all of the current jungle carpets available in North America today are a result of captive breeding over the past few decades. Fortunately, the initial imported stock was diverse enough to allow the selective breeding and healthy development of today’s amazing jungles.

When it comes to color development, not all jungle carpet pythons are created equal, but they do start out looking alike! Jungle carpets undergo a rather dramatic color transformation in their first two years of life. Out of the egg, they all start as drab gray-and-black specimens. There may be slight differences in shades of gray, lighter versus darker, but basically no vibrant color is present. The lighter gray areas, we’ll call them saddles, are what develop into the tan, copper, brown, gold or yellow-patterned areas seen in adults. The dark background area usually develops into dark brown, dark gray or black. After about six months, the saddles on jungle carpet pythons develop more and more color with each shed. This is partly why jungle carpet lovers get excited with each shed, to see just how much more color will be present in their little prize. Each shed is like Christmas morning!

The saddles reach a peak in color saturation between two to three years, and after that, they begin to show some darkening. The saddles can also begin darkening within the first year, showing a “browning” or “smudging” of the lighter-colored scales. For most jungle carpets, this makes the python less attractive looking, giving it a “dirty” appearance. Once a jungle carpet python begins to show scale darkening in the saddles, these areas will not become lighter or cleaner again. This is a very important fact to understand when acquiring a jungle carpet python. A minority of specimens retain clean, light saddle areas well into adulthood (when the snake reaches 3 to 7 years of age). These “colorfast” jungle pythons with clean, yellow saddle scales are greatly coveted by collectors as a wonderful display animal and also by breeders who want to create trophy bloodlines.

The pattern seen on a hatchling jungle carpet remains essentially the same during its lifetime with one exception, and that is the development of tipping. Tipping describes the occurrence of yellow spots within the black scales, or black scales within the yellow ones. Generally, yellow tipping is seen as an attractive development, and creates a flashy, busy appearance. In hatchlings, the areas that will develop into yellow tipping can be seen as indistinct lighter spots within the dark bands.

Jungle carpet pythons are fairly hardy snakes and moderately easy to care for. Because most breeders use hatchling racks to raise young jungle carpet pythons, the first enclosure should be relatively small with opaque sides as well. This will help the young python feel secure. A newly purchased, small jungle carpet placed into a large aquarium will often stop eating and spend virtually all of its time in an area hidden from view. Remember that in the wild, a young python is a tasty snack for a multitude of creatures, so staying hidden is essential for survival. A habitat the size of a 5- to 10-gallon aquarium will adequately house most jungles between several months to one year old. Covering the back and sides with black construction paper will enhance the young python’s feeling of security. Larger, more mature jungle carpet pythons can tolerate and utilize a bigger enclosure. A rule of thumb for larger jungles is that the minimum floor space should allow the python to stretch out completely using an area made up of the length plus the width of the enclosure. An area to climb and perch, a hide box big enough to curl up in and an ample water dish are essentials for jungle carpet habitats. The water dish does not have to be large enough to soak in, just to drink out of. Substrate should be dry, such as newspaper, paper towels or wood products, such as aspen shavings. (Avoid cedar, which is toxic to reptiles).

Jungle carpet pythons are nocturnal and have no special lighting requirements. A temperature gradient of 85 to 92 degrees Fahrenheit in the warm end of the enclosure and 68 to 75 degrees in the cool end is ideal. During the daytime, your jungle carpet will usually remain in the hide box. During the nighttime, it will often roam the enclosure or stay perched in a specific area with head and neck coiled, waiting for the next meal. After a meal, the jungle carpet will often bask in the hotspot, letting the warmer temperature aid in digestion.

Frozen-thawed rats, mice, chicks and quail are appropriate food for jungle carpet pythons. Many jungle carpets have a strong preference for mice over rats. Getting your jungle to begin feeding on rats is sometimes tricky, but it’s well worth the effort as a mature jungle will need only one rat, but up to 20 mice, for an adequate meal. An appropriate-sized meal item should be about 11⁄2 the size of the python’s midsection. Up until 2 years old, they will eat approximately every seven to 10 days. Once they have reached maturity, a feeding schedule of every two to three weeks is more appropriate.

Avoid the Bite Young jungle carpets are often “nippy,” which is appropriate behavior for a small prey animal. When removing them from the enclosure, don’t reach over them like a large predator might. Instead, lift them gently from underneath after they have a firm hold on your hand or a stick. Usually, they settle down and show less defensive biting behavior once they are used to handling and have reached a little larger size. Nearly all of my mature jungle carpet pythons have relaxed dispositions and are easy to handle.

If you have a lot of cash, a lot of patience and strike fast when opportunity arises, you can purchase a trophy-quality adult jungle carpet python with a velvet-black background and blazing-yellow saddles. This type of purchase opportunity is rare, however, so most of us buy young jungle carpet pythons, between two months to a year old, and hope that they will develop into trophies. The good part about this is that buying young jungles is less expensive, and you get the excitement of seeing how your python changes with each shed. The challenging part about this is that there is no guarantee that your young jungle carpet python will become a beauty.

So what can you do to increase the odds of obtaining a trophy jungle? Look for these three conditions:

There are a great many jungle carpet pythons available for purchase today, but only a limited few truly meet these three conditions.

It is best to buy a jungle carpet python direct from the breeder, where you can visually inspect the animal you are buying and view the sire and dam. Given that this opportunity isn’t always available when buying from Internet sources, a reptile show or a pet store, there are a few basics that can help you with your purchase. If you are buying from an Internet source, beware of unsubstantiated claims. After viewing literally hundreds of such ads, I have come to the conclusion that one person’s “high yellow” is another’s “drab brown.” One photo can be markedly misleading (intentional or not), depending on the type of lighting, background and photo editing, so don’t be shy about asking for additional photos. Ask for a photo with the snake next to an object with familiar colors — a box of Crayola crayons or a lemon, for example — or ask for one with the snake held in hand. I also think it is prudent to ask for photos of the sire and dam, as well as offspring of the same pairing from past breedings. If the seller doesn’t have this information, your chances of that young jungle carpet turning into a trophy are greatly reduced.

The first time I laid eyes on a jungle carpet python, the dazzling black-and-yellow pattern became emblazoned on my mind. I knew I had to have one, and I developed a dream to breed them as living art. I hope this article helps you to find that trophy jungle carpet python in your future!