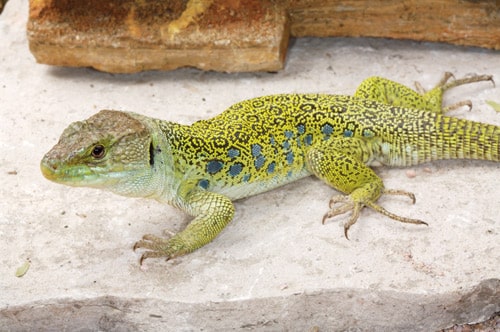 Jeweled lacertas (Lacerta lepida) have been bred in captivity for many years. Being a temperate lizard, jeweled lacertas require a cooling or brumation period. Usually, this cool down should last at least three months. Our colony in Southern California remains cooled down from late October to early April. We have observed breeding in our collection in May and June. Males are very aggressive during the breeding season, so make sure your animals are well fed. We have had one hungry male actually kill a female. 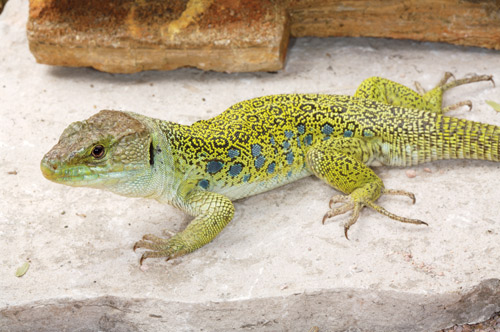 Jeweled lacertas require a cooling period before they can be bred.

Bert Langerwerf (2001) had lizards produce up to four clutches in a season, but two or three is the average. Nesting sites throughout the cage will be used. In our outdoor enclosures, the two, 4-inch ABS tubes per cage going behind the retaining wall are filled with a vermiculite, sand and coconut coir mixture, and they are usually used by our lizards as the nest sites. It is important to keep the substrate properly hydrated to ensure that the eggs, once laid, do not become dehydrated. We add water to the substrate until it barely holds together and add water as necessary during incubation. We try to remove our lizard eggs as soon as possible to incubate them in a substrate of either vermiculite or perlite in an incubator. There, we have better control over moisture and temperature. If using vermiculite, we do a 1:1 by weight ratio. For perlite, we just use the ready-made mix put out by Hatch Rite. According to Bert Langerwerf, incubation lasts between 80 to 90 days at temperatures between 75 to 85 degrees Fahrenheit.

Raising hatchling jeweled lacertas is relatively easy. Initially, they are somewhat delicate, but within a couple of months they are hardy. My wife, Cindy, and I have raised our babies in low, 20-gallon aquariums, each housing four individuals. As soon as the offspring’s sex can be identified, males should be separated to prevent cagemate aggression. Cage substrate can be a sand and coconut coir mixture, with slightly more coconut coir than sand. We keep temperatures in the cage no higher than 90 degrees by using an overhead incandescent light. It is important to allow the animals plenty of hiding places away from the heat. Cool end is between 78 and 83 degrees. A fluorescent light fixture with a UVB bulb is placed over the cage as well. The lights are kept on for up to 14 hours daily. Temperatures are allowed to drop into the low 70s (degrees) at night.

We feed our lacertas two week-old crickets per feeding initially, but they soon can take larger food items. On a schedule of four or five feedings weekly, jeweled lacertas grow very quickly. According to Bert Langerwerf (2001), animals usually reach breeding size within two years. Every attempt should be made to provide baby jeweled lacertas with natural sunlight at least for a few hours daily. Screen cages placed outdoors with shade and sunlight are beneficial for allowing this to happen. Monitor these outdoor enclosures to make sure animals do not become overheated. Babies will succumb quickly to temperatures that are too high. Heat in excess of 96 degrees is not recommended. If animals cannot be placed outside in natural sunlight, a good vitamin D3 supplement is in order as well. Babies kept indoors should have every feeding dusted with a vitamin D3 supplement.

Want to read the full story? Pick up the June 2010 issue of REPTILES, or subscribe to get 12 months of articles just like this.