Some reptiles and amphibians changed categories. Others were added.

After updating its Red List of Threatened Species in November, the International Union for Conservation of Nature reported that 30 percent of all known amphibians and 28 percent of reptiles are under threat. 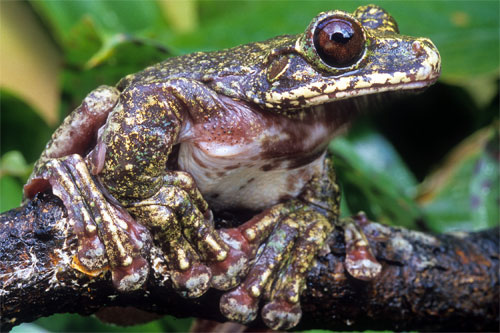 New to the IUCN Red List, the Rabbs fringe-limbed treefrog is listed as Critically Endangered.

According to the IUCN, amphibians are the most threatened group of species known to date. The IUCN Red List records 39 species as Extinct or Extinct in the Wild, 484 species as Critically Endangered, 754 species as Endangered, and 657 species as Vulnerable. 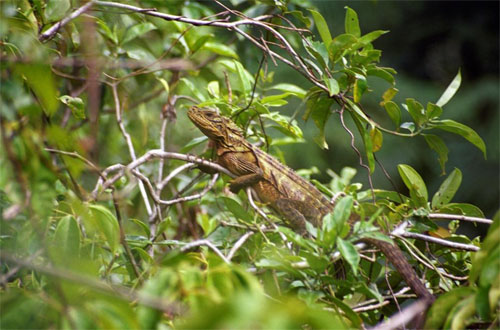 New to the IUCN Red List, the sailfin dragon is listed as Vulnerable.

The Kihansi spray toad (Nectophrynoides asperginis) moved from Critically Endangered to Extinct in the Wild. Only known from the Kihansi Falls in Tanzania, the species declined due to the construction of a dam upstream of the falls, the IUCN said, and the fungal disease chytridiomycosis also might have played a role in the toad’s final population crash.

Known only from central Panama, the Rabb’s fringe-limbed treefrog (Ecnomiohyla rabborum) entered the IUCN Red List as Critically Endangered. In 2006 the chytrid fungus (Batrachochytrium dendrobatidis), which causes chytridiomycosis, was reported in its habitat. According to the IUCN, this species has been collected for captive breeding efforts, but all attempts have so far failed.

The IUCN Red List records 491 reptile species as extinct or threatened with extinction. New to the list, the Panay monitor lizard (Varanus mabitang) entered as Endangered. The IUCN said the highly-specialized monitor lizard is threatened by habitat loss and humans, who hunt it for food. Sailfin dragons (Hydrosaurus pustulatus) also entered the Red List as Vulnerable. The species is threatened by habitat loss in the Philippines, the IUCN said, and hatchlings are heavily collected both for the pet trade and for local consumption.

The IUCN Red List is updated at least once each year.