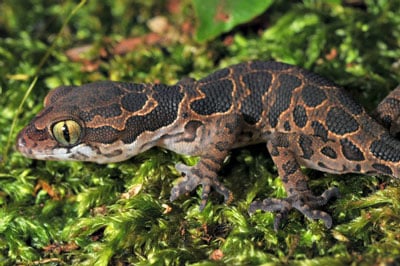 An Indian gecko species that was last seen more than 130 years ago has been rediscovered in the Eastern Ghats region of India in the states of Orissa and Andhra Pradesh.

The tiny gecko, Geckoella Jeyporensis, or ground gecko, which measures just 10cm in size was long thought extinct until scientists with the Centre for Ecological Sciences of the Indian Institute of Science (CES-IISc), Bangalore, BNHS Mumbai and Villanova University in the United States, working jointly, discovered the gecko in 2011. The Indian journal Hamadryad confirmed the rediscovery.

According to a report in the Indo Asian News Service, in 2008-2009, CES-IISc doctoral student Ishan Agarwal wanted to locate the species in an effort to understand how it evolved. Agarwal, along with doctoral student, Aniruddha Datta-Roy, and field assistant Tarun Khichi, set upon a herpetological expedition and attempted to retrace the approximate Eastern Ghats route that Col. Richard Henry Beddome, a British military officer and herpetologist took when the gecko was last seen. During the 2008-2009 expedition, the team failed to locate the gecko.

The team set out again on an expedition to locate the gecko in 2010-2011 and this time they were successful, locating the species in Andhra Pradesh state.  "We searched about two weeks in 2010-11, across a variety of habitats. Time spent in the right habitats (in retrospect!) was less than a week," Agarwal told ReptileChannel. "We found a single specimen each in 2010 and 2011, during which time we saw less than 30 Geckoella nebulosus. The first area we found it in 2010 is close to the (imprecise) type locality given in the original description," Agarwal said.

Villanova University researchers Giri and Aaron Bauer studied the taxonomy of the species and confirmed that what they found was indeed a rediscovery of Geckoella Jeyporensis.

9 Species of Frogs Discovered in India, 13 in Sulawesi

Monitor Lizards Still Being Sold in Fish Markets in India

"This species is unique among Indian geckos as it has enlarged, hexagonal, plate-like scales across the back," Giri told IANS. "It is one of the most beautiful among Indian geckos, with an orange-brown dorsum, a series of large chocolate brown dorsal blotches," Giri said. Giri further said the gecko appears to be restricted to semi-evergreen forests in the Eastern Ghats mountains, above 1,000 meters in elevation. Eventhough the gecko's coloration is striking, the reason behind the colors are unclear. "It doesn't match the native flora in particular, and the reason behind its beautiful colour pattern is not known,' Agarwal said.

So what is next for this species? Hopefully, according to Agarwal, some level of protections. "The species does not occur in any protected areas and so the first step would be to try and get some measure of protection granted to these areas," Agarwal said. "Further surveys in similar high elevation forest would help us understand its distribution and status."