The coastlines of India, Sri Lanka, and Bangladesh are the most dangerous locales for sea turtles, according to a report by the International Union for Conservation of Nature released September 29. According to the report, in which sea turtle experts from around the world contributed, nearly half (45 percent) of the world's threatened sea turtle populations are in the northern Indian Ocean. Five of the 11 threatened species are found in the Indian Ocean, including the Loggerhead (Caretta caretta) and Olive Ridley turtles (Lepidochelys olivacea). Other areas that are deemed dangerous by the authors of the report include the East Pacific (from the United States to South America) and East Atlantic Oceans (off the coast of western Africa). 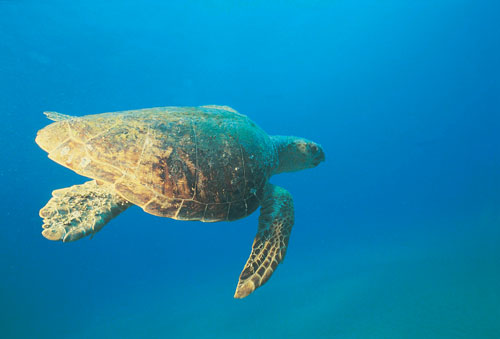 The Loggerhead sea turtle (Caretta caretta) is a threatened species in the northern Indian Ocean.

This assessment system provides a baseline status for all sea turtles from which we can gauge our progress on recovering these threatened populations in the future, said Roderic Mast, Co-Chair of the MTSG, CI Vice President, and one of the paper's authors. Through this process, we have learned a lot about what is working and what isn’t in sea turtle conservation, so now we look forward to turning the lessons learned into sound conservation strategies for sea turtles and their habitats.

These reptiles are being decimated by fisheries bycatch, harvesting turtle eggs for human consumption, as well as the killing of turtles for their shells for commercial use. The report is the first comprehensive status assessment of all sea turtle populations around the world and is supported by Conservation International and the National Fish and Wildlife Foundation. The study also details areas where sea turtle populations such as the Hawksbill (Eretmochelys imbricata) and Green sea turtles (Chelonia mydas) are healthier. These include sites in Australia, Brazil, and Mexico, the Southwest Indian Ocean, Micronesia, and French Polynesia.