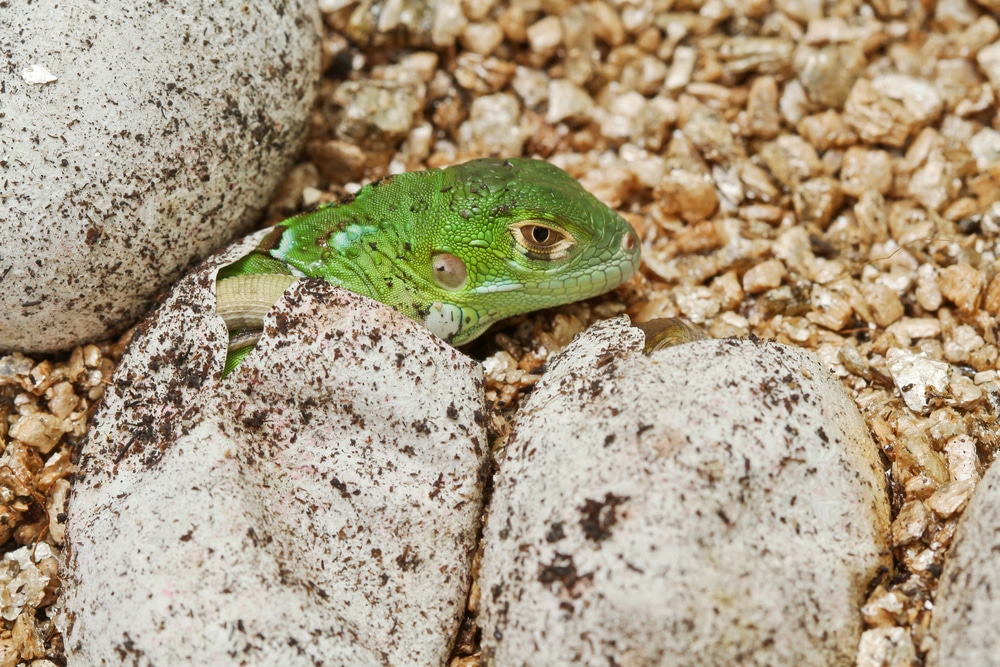 What is wrong when your reptile only lays one egg?

I have a concern with my gravid green iguana. She has successfully laid clutches in the last two years. She is now four years of age and is ready to lay her eggs. The problem is she only laid one egg the other day. She is still eating and drinking water, alert and active regarding climbing up onto her basking spot. Her first clutch at the age of two was 34 eggs; second time, 56 eggs; no problems with the egg-laying both times. This time she, as mentioned above, has only laid one egg. Because I am limited to vets who work with iguanas (rare here in a small town in Canada) what are some of my options, or signs and symptoms of distress? When is it an emergency? A week? Four weeks? Or two days? I have read different things, but I’m not too sure what to focus on. Her vent is slightly puffy. Her snout to vent length is 14 inches. Her total length is 48 inches, including her tail break, which she had when I first bought her.

A while back, I wrote a paper for herp vets on female lizard reproductive issues. It explains the normal cycle, when to start worrying and when medical or surgical intervention is necessary. You can read this paper on my website: www.exoticpetvet.net.

Wild iguana breeding season depends on many variables, including photoperiod, temperature, rainfall and food availability. To some extent, the same influences are involved with the captive iguana. In Panama, the breeding season occurs in late fall through spring. In captivity, iguanas in North America often begin cycling in February through May, and they will usually oviposit (lay eggs) in June through August. Yet it is possible for them to cycle at any time of the year when conditions are favorable.

At the onset of reproductive activity, the lizard undergoes vitelligenesis. As the reptilian follicle begins to mature, the yolk material will accumulate around the egg. Vitelligenesis occurs as estrogen (a female hormone) stimulates the liver to convert a type of fat called lipid to vitellogenin.

During vitelligenesis, the liver enlarges dramatically, and it becomes orangish in color. The follicles selectively absorb the vitellogenin from the bloodstream, plumping the follicle with yolk. Blood drawn from an iguana during vitelligenesis will appear lipemic from the circulating vitellogenin. Once the ovum has ovulated, it will have albumen and the shell added in the oviduct. At this point, it becomes an egg. Prior to ovulation, the mature follicles will appear as a cluster of grapes and are of soft-tissue density on radiographs (x-rays). Once the female has ovulated and shells have been added, the eggs will be visible on radiographs due to the calcification of the egg shells.

It is important for herp veterinarians to distinguish between pre-ovulatory follicles and actual eggs because the course of treatment will vary according to these different conditions. Gravid iguanas and other lizards with eggs require a suitable nesting site.

Females engage in specific nesting behaviors, including digging a rather deep hole in order to oviposit their eggs. Many pet green iguana owners may not realize their female is preparing to go through a breeding cycle (for example, she is alone and has not been with a male to fertilize her eggs) and therefore do not provide her with a suitable nest box with a minimum of 1 to 2 feet of substrate. (Clean potting soil or construction sand mixed with potting soil and vermiculate is one option, or try sphagnum moss, vermiculite and peat.) Lack of a suitable area for digging, which stimulates oviposition, is a major reason why many gravid females develop egg-laying problems.

In addition to the female lizard retaining her eggs because she does not have a suitable location and substrate for digging, there can be many other causes of dystocia (difficulty in laying eggs).

Nonobstructive dystocia, where the eggs appear to be of normal size and shape and the female appears to have normal anatomy, are usually the result of poor husbandry, including an inappropriate nesting site. Other causes of nonobstructive dystocia include malnutrition, improper temperature, dehydration, poor physical condition and possibly oviductal infection. In some cases, a female suffering from malnutrition or poor physical condition will begin oviposition and will lay the majority of the clutch (or just an egg or two), but she may end up retaining one or more eggs as a result.

Obstructive dystocias occur due to an anatomic inability to pass one or more eggs through the oviduct (shell gland) and cloaca. Eggs may be oversized, malformed or have an irregular surface, making expulsion difficult if not impossible. The female may have a misshapen pelvis, oviductal stricture or masses such as abscesses or bladder stones. Other causes of obstructive dystocia can be a malpositioned or damaged egg. In rare cases, the female may develop eggs before she has grown to sufficient size to be able to successfully pass them. I have seen this more frequently in rock iguanas (Cyclura).

A normal gravid female iguana will have an extremely swollen abdomen, and it may be possible to view and feel individual eggs. If she stops eating as her belly fills with eggs, this is normal. Some gravid females will continue to eat small amounts of their favorite foods right up until ready to lay.

It takes about eight weeks for a female to go from early production of enlarged follicles to actual egg laying. Most iguanas will go off food approximately 65 days after copulation (if she is with a male). Some females will develop large follicles on the ovaries, and then resorb them if the conditions are not favorable for oviposition. This cycle may then repeat in subsequent seasons.

It is very important to ascertain if the female is resorbing her eggs. If the ova in the follicles do not ovulate and do not resorb, the mature follicle membranes will adhere and coalesce, resulting in a large agglomeration of friable yolk. This mass may rupture, and the free yolk mass in the coelom (body cavity) can cause severe inflammation and peritonitis, resulting in dangerous illness and even death. Rarely, the yolk can be reabsorbed into the bloodstream, resulting in “yolk stroke” which can be fatal.

Post-ovulatory eggs will have albumin, membranes and the shell applied in the oviducts. These are usually visible on radiographs. If the eggs are visible and the female has been anorexic (not eating) for four weeks, she should be close to laying her eggs.

At this time, she should be maintained at the higher end of her temperature range (for green iguanas, this is 94 to 96 degrees Fahrenheit) and she should be provided with an appropriate nesting site for digging and oviposition. Hopefully, she is already on a good diet and has received supplemental calcium (calcium glubionate) at 1 ml/kg orally twice daily or calcium carbonate at an equivalent dosage during at least the last four weeks of her pregnancy. This provides her with enough calcium to produce normal egg shells. She should also be provided with full-spectrum fluorescent light, replaced as directed by the manufacturer, in order for her to absorb and metabolize her calcium more efficiently.

This is not always the easiest thing. The owners had to notice when the female stopped eating (if she did) and her general condition. Blood work can be helpful in assessing the health of the lizard, whether she is dehydrated and how her kidneys are functioning (to some extent). Her blood calcium level can help the herp vet determine where she is in her cycle, but this test also has its limitations.

When do gravid female iguanas become of concern? They may not eat for four weeks, and healthy ones can handle this quite well. When a gravid female has been off feed for four to six weeks and has the correct conditions to lay, I recommend medical therapy with vitamins, fluids, calcium and hormones to induce her to lay. Prior to administering meds, I take a detailed history, perform a thorough physical examination, take radiographs and draw blood for CBC and chemistries.

Of course, I will recommend immediate therapy if the gravid female “crashes.” A normal female iguana is bright and alert, so depression, lethargy or unresponsiveness could be a warning that she is not doing well. A change in skin color to a dull hue, obvious weight loss or tremors also are signs that she is developing complications to her pregnancy.

Because you told me your female’s cloaca appears puffy, my suspicion is that she has an unusual egg that she cannot pass, which is why she has only laid one egg this time. A herp vet may be able to identify the problem egg and aspirate its contents through the body wall using a syringe and needle. This procedure would implode the egg, which may allow it to pass naturally.

A problem can occur when the eggs are retained inside the shell gland for too long, and the body begins to develop adhesions between the eggs and the oviduct (shell gland), making it more difficult for them to pass on their own. She may require surgery to actually remove the eggs, and if you don’t really want to breed her in the future, you can have your vet perform a “spay” (surgery to remove the ovaries and oviducts) so you won’t have to worry about reproductive problems down the road.

If it hasn’t been too long since she laid that one egg, it might be possible to have your vet give her fluids, calcium, vitamins and a hormone to cause oviductal contractions, which would assist her in expelling the eggs. This can be performed in addition to imploding any abnormal eggs, but if adhesions have already begun forming, then surgery may be necessary.

If you don’t have a local herp vet with experience in iguana reproductive problems, or you cannot locate a willing vet, you can recommend your vet to call and ask for a consultation with an experienced herp vet (such as myself) who can assist in walking your vet through the necessary steps.

You said your iguana is still eating and acting normally, so if her weight seems stable, then you might not have a true emergency yet. However, you need to find a herp vet who is willing to work with you, so you can begin developing a game plan for her. You didn’t mention if she is still passing stool, urine and urates, and that is important information. You might want to provide her with a kiddy pool heated with a submersible aquarium heater, so she can swim and exercise daily.

In the meantime, make sure that her diet is calcium-rich, that she has full-spectrum lighting and that she has a suitable place to dig and oviposit. If you provide this care, then you need to find a herp vet willing to help you. If she develops any of the clinical signs I have already mentioned, you need to find one as soon as possible. The longer the eggs are retained, the higher the risk of complications.

Rarely a female will lay a group of eggs, wait a few days and then lay the rest of the clutch, but the fact that she only laid one egg bothers me. The puffy vent also bothers me, so I am leaning towards advising you to seek veterinary assistance immediately.

No one, even an iguana owner in Kenora, is truly alone out there. Most veterinary diagnostic labs offer a free consultation service for herp vets, so they can speak with an experienced herp vet at any time. This can be invaluable in cases like this. 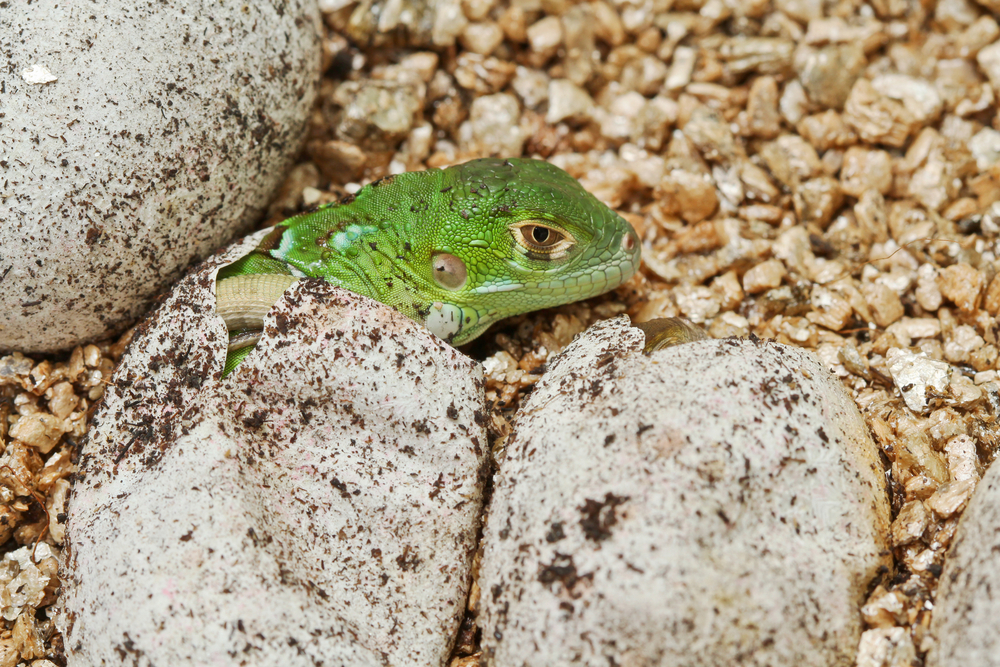 Iguanas in North America often begin cycling in February through May, and they will usually oviposit (lay eggs) in June through August.