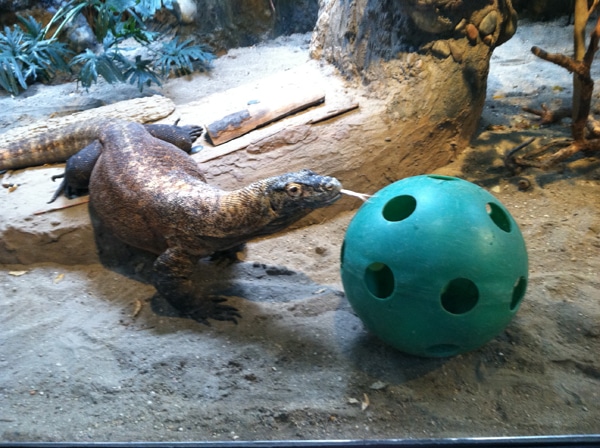 How to Entertain your Dragon

So, you have a pet lizard. You’ve set it up in a state-of-the-art lizard house with all the necessities including: space, comfortable shelter, h

So, you have a pet lizard. You’ve set it up in a state-of-the-art lizard house with all the necessities including: space, comfortable shelter, healthy food, UV light, proper heat and humidity, clean water, and hopefully a good vet checkup or two. What else could it possibly need? Now imagine yourself in a box with all of those things. After 10 minutes, you would be so bored that rubbing your face on the wall until it bleeds could actually be entertainment for you.

Up a Crocodile-Riddled Creek in Costa Rica 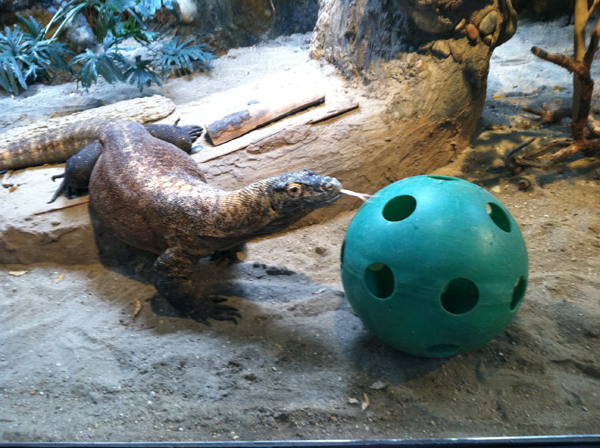 Shu gets some stimulation at the Turtle Back Zoo in New Jersey.

Dragons need entertainment just like we do. In the zoo-keeping world it’s called enrichment. Enrichment is a combination of mental and physical stimulation that not only cures boredom, but can prolong the life and health of an animal. A happy animal is more likely to be a healthy one. Mammal keepers stole it from bird keepers who stole it from parents who stole it from the first teacher who invented recess.

Many of the following techniques will work with all monitor lizards, and many other species of lizards. I just happen to be using a Komodo dragon (Varanus komodoensis) because I am the butler to one fine, 104 lb specimen. Also, I’m a bit of a braggart. Shu (the previously-mentioned dragon) lives on exhibit at the Turtle Back Zoo in West Orange, New Jersey. Keeping him (and the other animals I care for) entertained is a large part of my job. I’ve got to say, it’s one of my favorite parts of the job as well.

So let’s get to it. Some basic rules while inventing ways to enrich your dragon: 1. Make it safe. For example: I don’t give Shu live prey. Some people would consider that to be a form of enrichment. Besides the nightmares it would give to the school groups if I tossed a live bunny in with Shu, I would have to worry about parasites. I would also have to worry about the rabbit (or whatever prey item) biting Shu. Granted, he is an adorable, scaly killing machine, but a rabbit could take an eye out or cut the inside of his mouth leading to infection. It’s best to keep food-based enrichment pre-killed, and frozen-thawed.

I often put Shu’s food in some sort of container that he has to figure out. For Halloween I put his food items inside a jack-o-lantern. He had to figure out how to get it open. I’ve also used things like hollow logs, buried his food, put it in empty plat pots, and put it under things that he had to flip to access. Sometimes I just hand him food from tongs. This takes approximately .6 seconds to finish two rats, a quail, and a fish. When he has to figure out a puzzle to get to his food, such as the pumpkin, it takes him up to half an hour. That’s 30 minutes he’s not bored. That’s 30 minutes that his body and mind are both occupied. Foraging in the wild may take up to 70% of an animal’s day. In captivity all that time is spent doing nothing. 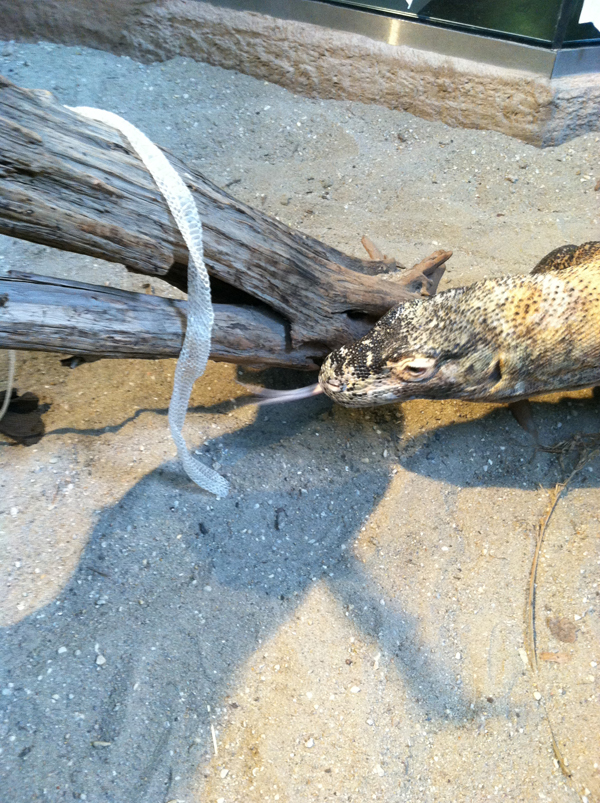 Shu checks out a snake shed.

2. Get into your dragon’s head. How does it think or find its way around the world? Lizards not only use their eyes, but nose, tongue (Jacobson’s organ), ears, and sense of touch to interact with the world. Enrich as many of these senses as you can. The sense of smell is an easy one to work with. I often rub different scents around his exhibit. He gets smells from food-based items like hamburger blood, chicken broth, and fish slime to name a few. I also give him non-food based scents like perfume, hot sauce, shed snake skins, hay that other species of animal laid in, and even ode-de-porcupine-butt. Just make sure they aren’t harmful via toxic chemical or parasite.

The scents can be placed on almost anything. Again, make sure it’s not a choking hazard. Your lizard will more than likely try to whoop up on the object, so make sure it can’t rip chunks off and swallow them. I often give Shu a huge plastic ball with some sort of nasty odor. He rolls it all over his exhibit trying to figure out what to do about the new smell. 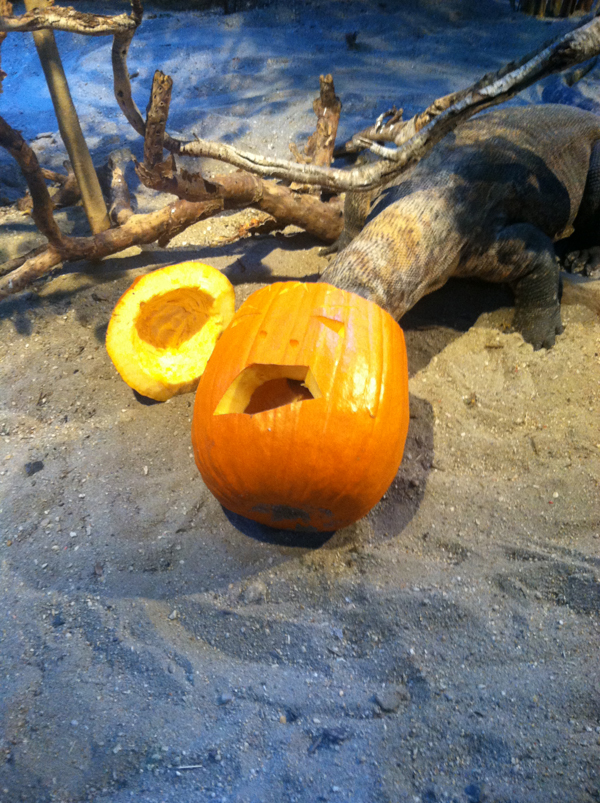 Shu getting a bit of stimulation as he searches for food.

3. Change environments. If you want to stimulate your lizard, take it outside. Shu gets to go outside several times a week during the warm months. Hopefully, he will have an outdoor enclosure for the summer months soon. There are all sorts of benefits to going outside. Natural UV light is a big one. If you haven’t taken your lizard outside for real sunlight, be prepared for a huge and sudden personality change. I’ve seen the sweetest of lizards lose their freaking minds after a couple of minutes of natural sunlight. There is so much more for all of the senses to take in. There are other live animals such as birds to observe, not to mention all the new smells. Make sure to not let your lizard get overheated, over cooled, eaten by a predator (hawks, cats, dogs, and that weird neighbor that eats paste can be jerks), escape, or generally injured. Taking them swimming in a bath tub or kiddy pool is always fun, just be ready for poo.

4. Make the dragon’s enrichment your enrichment. Just about anything you do with your lizard outside of leaving it bored in a cage can be considered enrichment. So entertain yourself with your pet dragon. Shu likes to paint and sign autographs. We have had him walk through non-toxic paint and walk across pieces of construction paper leaving a print. Please don’t do this inside. Some of Shu’s original prints have sold for thousands (of pennies). All the proceeds go to further enrichment classes for keepers or some sort of conservation charity. He’s a generous dragon.

If you come up with a good idea, write it in the comments. If you have a crappy imagination, just look up reptile enrichment on the internet. There are literally thousands of safe ideas to entertain your dragon, most of which will entertain you as well.

Michael P. Wines is an author, woodworker, and herpetologist focusing on Eastern Indigo Snakes (Drymarchon couperi). He is a reptile keeper at the Turtle Back Zoo in West Orange, New Jersey. If you enjoy his writing, his first kid’s novel, Stupid Alabama, was published by Ardent Writer Press and he desperately wants you to buy it. It can be found on Amazon.com.