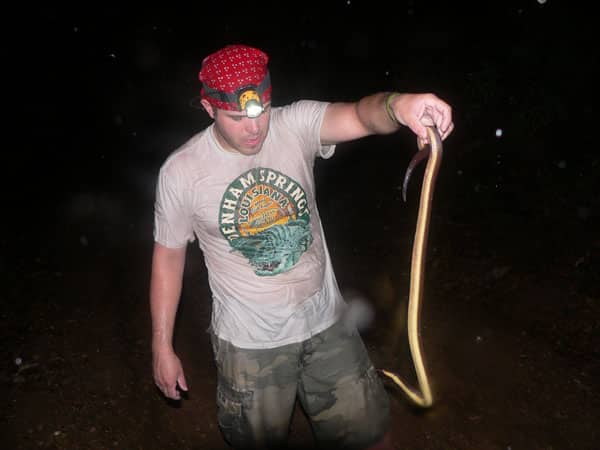 A croc trip turns into a full on herping expedition.

So, I found myself in stupid Alabama, recently divorced, and starting grad school at the ripe age of thirty-six. Life generally sucked. I needed something, anything to keep me from turning into a drunken, whiney, pathetic pile of self pity. Luckily, one of my lab mates needed an extra set of hands on a research project and I had the only set available. He asked me to go to Costa Rica to catch crocodiles. I’d been to the Central American country before, but it was on my honeymoon, and I didn’t get to explore the wilderness like I had always dreamed. Despite feeling like the last chubby kid picked on the playground for a dodge ball game, I wholeheartedly accepted the invitation for high adventure.

The weirdest two weeks of my life began with me leaving my passport at a Costa Rican bank. It’s cool, though. I realized it at a random checkpoint 30 miles down the road. I was determined to be helpful, nay, useful, and my very first action was to almost get arrested in a foreign country. Way to go, genius. Thankfully, the people of Costa Rica are like a bunch of Boy Scouts and considered me their good duty of the day. No matter how badly I blundered, they happily helped me out at every opportunity.

But, this being ReptilesMagazine.com, you want to hear about the animals. Let me first tell you about the two beasts I tagged along with. Chris Murray (a Ph.D. student and lab mate) and Mike Easter (his gator-wrestling buddy from Florida) were my wolfpack. Granted, I was more of a basset hound, but they were definitely wolves. They had youth, muscles, experience, and as far as I could tell, were fearless. The roles had been established and the adventure was on. Chris was the leader. Mike was the tough veteran. I fell into my usual role of late as the mascot, the goofy sidekick. Our destination was Palo Verde, a dry forest located in Guanacaste, arriving there at the end of the dry season.

We were excited to explore the forest, so we went hiking that very night. About a half-mile (or kilometer–we are scientists here) into the forest the first rains of the season hit us like a tsunami falling from the sky. Lightning, thunder, wind and blistering rain pummeled everything. Much to my amusement both Chris and Mike turn into eight-year-old bed-wetters walking into a boogie-man convention when lightning was close. What’s a few hundred-million volts of electricity between friends, right? So our fearful leader decided to get the heck out of there. We didn’t make it 10 meters (science!) before the creatures began to emerge.

If you ever get the chance to experience springtime in Central America, take it. I had dreamed all my life about the rainforest, the jungle and all its mysterious wild things. Finally, there they were, surfacing by the hundreds. We came across a spring-fed stream and followed it to a small pool. Marine toads (Bufo marinus) the size of pineapples stood around the parameter like warty gargoyles. They had no fear of us, and we often had to step around them. Then we found our first serpent, the blunt-headed snake (Imnatodes gemmistratus), creeping along a low-hanging vine. They look like spaghetti with eyeballs. Even though we were making some great finds, the (scaredy-sissy-pants) men were still concerned about the thunder and lightning. We headed back to the dirt road connected to the field station. 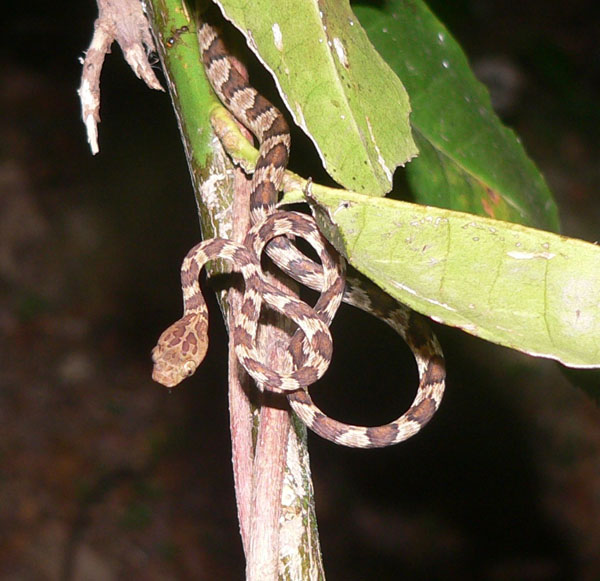 Upon cresting the hill, Mike yelled, “Snake!” Which is like ‘Gooooooooooal’ to a herpetologist. We spotted the kielbasa-thick brown snake crawling into a hole along the side of the road. The snake turned out to be a Mexican burrowing python (Loxocimus bicolor).  It was one of the only identifications I helped with. 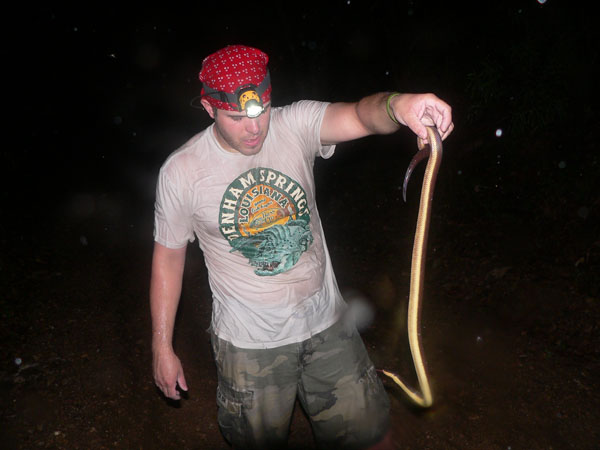 I had previously worked with the gentle critters, and never expected to find one. Score! My first night in the jungle (I know it was technically a dry forest, but jungle sounds more adventurous) and we’d already seen two snakes. We walked back to the field station, finding a few more critters along the way. One was what I called a hi-lighter toad (Anaxyrous luetkenii). 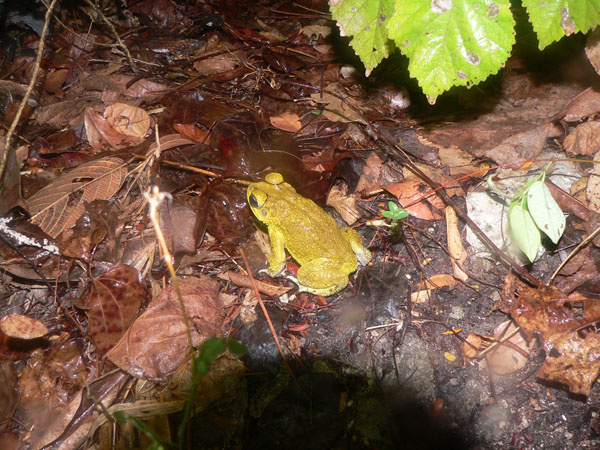 It was unbelievably bright yellow and would have been one of the coolest creatures I had ever come across had I not stumbled upon eight thousand of them shortly thereafter. We spotted an amplexing (frog sexy time) pair of Mexican burrowing toads (Rhinophrynus dorsalis). If you melted a hockey puck into a puddle and sneezed on its back, you would have a Mexican burrowing toad. 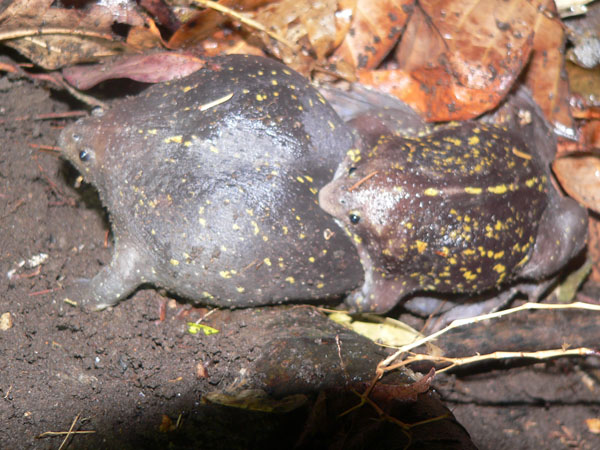 Chris had a day or two of preparation before we went for the crocs. He had spent some time there the previous summer and scouted a canal he wanted to explore. He begged, borrowed, and possibly stole a boat. By boat, I mean an aluminum can cut in half lengthwise, with three benches. It was the only floating thing available and we were glad to have it. Also, it fit nicely into the back of the field station’s truck, so at least we didn’t have to carry it to the site.

On our first trip we were dropped off as far down the canal as the truck could go. While driving along I saw several crocs sunning themselves on its banks. Needless to say, the adventure bug gnawed on my mind. We unloaded the whaler and as we packed our equipment into the floating filing cabinet, Chris was taken to the side by Solomon, the driver of the truck. Of the three of us, Chris was the only one that had the local dialect mastered. By 'mastered' I mean he knew the swear words and was pretty good at hand signals. Luckily, Solomon had watched some American television from the early '70s.

After a few minutes of explanation we were told to tie the boat to a tree downstream so we didn’t have to drag it back to the field station every night. It sounded reasonable. There was one catch, though. To prevent it from being stolen we had to chain it on the other side of the canal. No one was crazy enough to cross the crocodile-riddled waterway to steal a crappy skiff. That meant we had to cross said canal on our way back, in the dark when the crocs were most active. I’ll get to that later.

Solomon, Alexander and Oscar, the other guys who dropped us off, wanted pictures with the ‘crazy gringos’ before we left. We agreed to meet them at the same spot at 4 a.m. for a ride back to the station. As the current slowly pulled us downstream, away from the truck, Alexander, Oscar and Solomon began singing the theme to “Gilligan’s Island” in broken English while waving goodbye. I have a particularly fond memory of the line, ". . . a three-hour tour…"

Our first nightly adventure had begun. The boat motor consisted of a paddle. Yes, one. It was a two-inch-thick piece of possibly petrified hardwood cut into the shape of a paddle, weighing approximately 47 kilos, give-or-take (that’s more than 47 pounds). Luckily, Chris lost it within the first hour to the depths of the croc-filled canal. Too bad AAA didn’t have a canoe service. We floated on, not worrying about how we would get back upstream later. There were monsters to conquer!

Mike Wines is a herpetologist with a special interest in indigo snakes. He is also the author of "Stupid Alabama", a book about, what else, Alabama. You can read more of his work at MichaelPWines.blogspot.com.