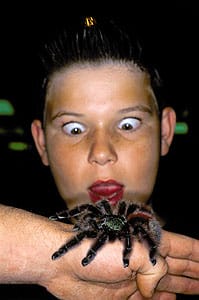 Tarantulas and scorpions aren’t herps. Why are they always lumped together with them?

Tarantulas and scorpions aren’t herps.  Why are they always lumped together with them in pet shops, at herp shows and now even in REPTILES?
Simon Leffers
Newcastle, England

Invertebrates didn’t have enough of a following early on to warrant specialty shops or full-color publications devoted solely to them, but reptiles and amphibians did.

Many kinds of bugs, especially the larger arachnids, grabbed our interest immediately when they showed up in import shipments of herps. Obviously, the world’s exporters made the association that anyone who wanted herps as pets must also be crazy enough to admire six- and eight-legged creepy crawlies too. They were right!

I’ve always been fascinated with spiders and insects, and I know many of my colleagues in the herp world echo my sentiments. Most of us have kept a variety of them while narrowing our interests, and we still find them nearly as awe-inspiring as herps. So, it’s only natural then to give them some space at herp events and in publications.