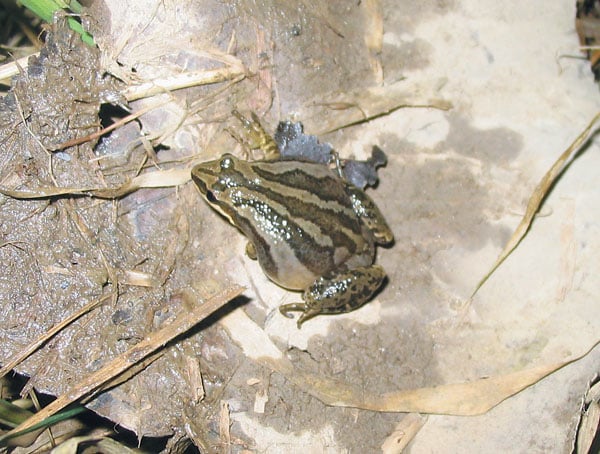 A longtime herper hunts for the once common western chorus frog.

I grew up in Independence, Ohio, and in this suburb of Cleveland there were areas of woods, marshes and creeks to explore during my frequent searches for reptiles and amphibians. Like many young people, I had a paper route. One day while I was delivering newspapers, I heard calls coming from an open field. The sounds, which I had never heard before, were reminiscent of the noise made when running a thumb over the teeth of a fine comb. Sounding like a long creak, they were more amphibianlike than insectlike.

I decided to investigate. I leaned my bicycle against a tree and ventured into the field. The area was wet with some spots containing shallow standing water. It seemed likely this area’s condition was temporary due to its small size. The weather had been unusually rainy, which helped to create these marshy conditions. After a considerable amount of time searching, I came up with nothing.

I was puzzled for a while, but as I pondered whether the noise had really come from bugs, I spotted the source of one of the sounds. A small, striped frog, vocalizing intently, perched on a grass clump. Although it sat right in front of me, it was hard to see. I’d made acquaintance with my first western chorus frog (Pseudacris triseriata). 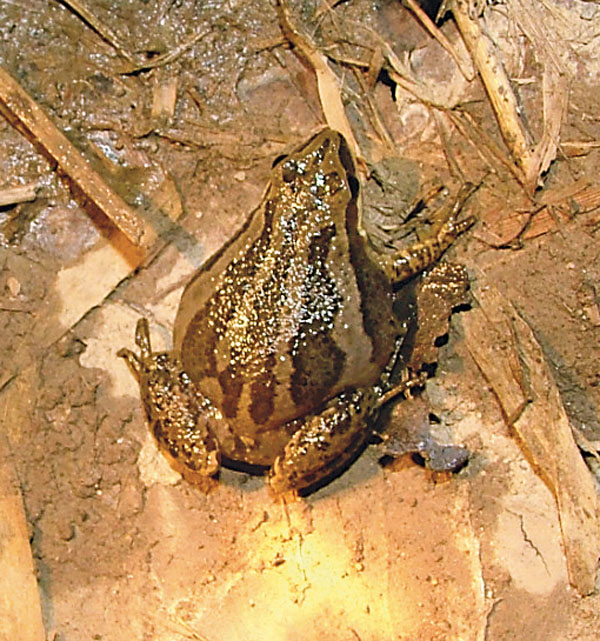 That was 25 years ago, and times change. Although the field and a strip of adjacent woods are still there, chorus frogs no longer call from this area.

Where did the frogs go? According to the Cleveland Museum of Natural History’s website, western chorus frogs are widely distributed throughout Ohio, but they become rare in northeastern Ohio east of Cleveland. Was the much-publicized amphibian decline finally hitting home? I contemplated this and the fate of the tiny frogs that I’d found so many years earlier.

When Independence High School biology teacher Scott Maretka asked whether I’d like to join the school’s biology society on a frog hunt, I took him up on the offer. Scott then said he had heard a few chorus frog calls in the area a few days earlier, which further intrigued me. Would I become reunited with a species I hadn’t seen in more than two decades?

Surrounded by the Fearless

On an uncharacteristically mild April night, the group assembled on land owned by the Independence Board of Education. The property line of this 50-acre parcel of land nearly reaches the Cuyahoga River’s banks, which Cuyahoga Valley National Park protects from development. The idea behind the park is to preserve the rural landscape along the Cuyahoga River between the cities of Akron and Cleveland. 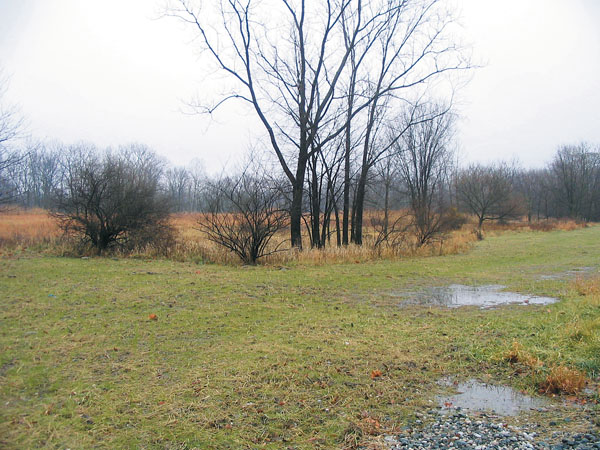 Cuyahoga River flood plains are a suitable habitat for a wide variety of breeding amphibians.

As we made our way down to the flood plains of the river, we stopped at ponds on the board of education’s property to see spring peepers (Pseudacris crucifer). Although they weren’t out in mass numbers like they were in March, the frogs hadn’t called it quits yet. They still called in earnest hopes of finding a mate. We managed to get some frog-finding practice with them.

As darkness fell, we reached the riverbank. Then something unexpected happened: toads. Not just one or two — hundreds of them. American toads (Bufo americanus) usually begin calling at the end of May, but we were surrounded by them. Most of the multiple shallow pools of water contained little vegetation, making the amphibians easy to spot. I’ve never seen so many in one outing. We observed wrestling matches between males jockeying for position to mate with females. We saw toads of different colors and patterns, and we listened to their trills. Often one toad’s call set off a chain reaction, inducing others to join in the song. 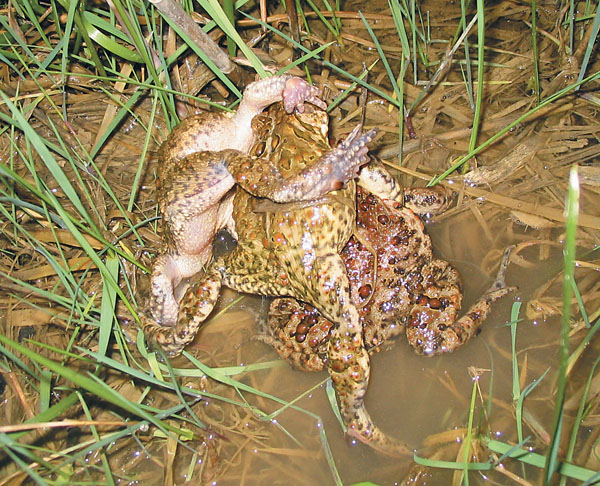 Several American toads (Bufo americanus) wrestle one another as they compete for females.

Occasionally, in the midst of all the excitement, one male approached another and grasped it thinking it was a female. That’s when we heard what’s known as the “release call,” which the toad being grasped uses to communicate that it’s male. It’s the amphibian’s way of clearing up cases of mistaken identity. The area was open, quite unlike visiting a vernal pool in the woods. It was a strange and wonderful sensation to be surrounded by so many seemingly fearless amphibians.

Alone in the Dark

As the congregation of American toads trilled away, occasionally we sifted out the long creak of the western chorus frog. These frogs were especially wary. They stopped their vocalizations long before we had any chance of pinpointing their locations.

I decided that I’d have better luck if I separated from the group, so off I went. A while later I was alone in the dark and standing knee deep in water. I had heard a chorus frog calling from the spot 15 minutes earlier. It was the beginning of a long, lonesome wait.

Then I heard a sound that took me by surprise. Sounding a bit like a person snoring, it was kind of spooky. I wasn’t sure what to make of it, but I knew the only way to resolve the situation was to capture and identify the snorer.

After a stealthy approach, I made a quick grab to capture a northern leopard frog (Rana pipiens). I was not only pleased in making the catch but also glad to see one of Ohio’s (and America’s) most beautiful anurans. The chorus frog that brought me to this area, however, never resumed its calls. 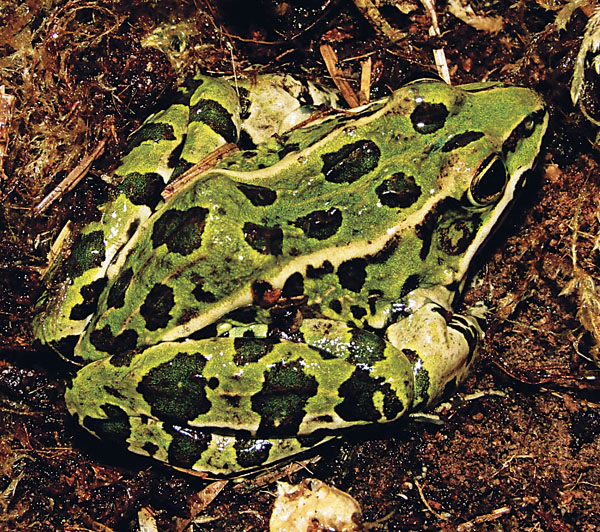 A northern leopard frog (Rana pipiens) displays the attractive markings for which its species is known.

I later rejoined the students, who turned up a few young green frogs (Rana clamitans), which added to the diversity of the night’s finds. They had several toad tales regarding their observations, and they even shot video footage of the amphibians with their cell phones. It was nice to see so many young people excited about herps.

Our hopes waned on finding the elusive western chorus frog, and the chaperones began to send students home. Scott and I stuck around to get the best possible photos of the amphibians we found. Although thrilled at seeing so many frogs in one night, we were a little disappointed as we photographed and released our finds.

We then waited for Kevin Wall, a history teacher with an interest in herps. Like me, he had decided to try his luck at solo herping. Kevin turned out to be our secret weapon.

While we packed up the photography equipment, Kevin returned smiling. He held something in his hand.

Indeed he had. The female western chorus frog was heavy with eggs.

Seeing this species in person after more than 20 years of it only being a memory was very rewarding for me. The distinctive, three-striped pattern and dark face mask took me back to a time when these frogs were common. The small frog made me realize that some types of herps — those that were once so common that I took them for granted — are now a special find. It was a great way to end the field trip. 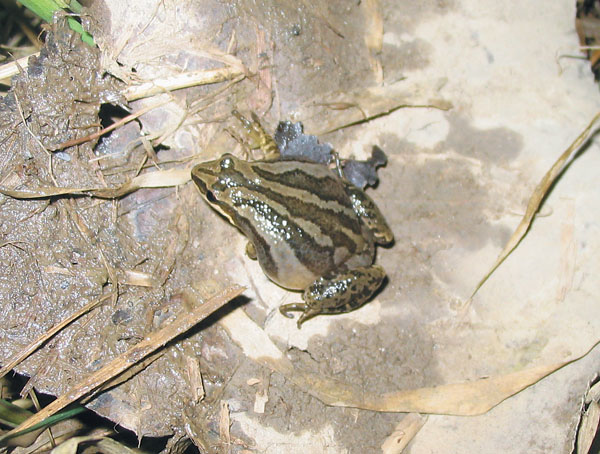 A few days later the area where we saw so many frogs and toads was blanketed in snow. Even this typical April weather for Cleveland couldn’t dampen my mood. My herping year was off to a great start.