These Florida frogs keep the sounds of springtime alive.

It’s spring again. Wilson’s snipes are still skulking amongst the vegetation along the banks of pasture ponds and roadside swales. Bald eagles are feeding youngsters just a week or two away from fledging. Cedar waxwings are gorging on the berries of East Palatka holly trees, and fortifying themselves for the long journey northward. The sandhill cranes — many thousands of them — left Payne’s Prairie for points west and north two weeks ago. Winter, already gone on the calendar, is now leaving in actuality

I recently saw a big female peninsula cooter (Pseudemys peninsularis) beginning a nest. Jack-in-the-pulpits are in spathe. Native azaleas have almost “gone by,” their pale-pink blooms fading daily. And the swamplands, reverberating with the calls of spring peepers (Pseudacris crucifer bartramiana) throughout the winter months (these little frogs are actually winter peepers in Florida), are now silent — but just for the moment. The next lengthy rain or two, especially if they’re warm rains, will bring with them the voices of our frogs: quonks, peeps, trills, doooonks and Morse Code staccato. 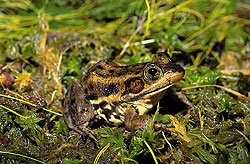 The range for carpenter frogs (Rana virgatipes) in Florida is the extreme northeast corner of the state.

My friend Jim Harding and I took a quick drive up to northeastern Florida. We stopped to look at the almost matured leaf-traps of pitcher plants and marveled at the orange, shoe-button blooms of Polygala. Snakes were sparse, but we did see a peninsula ribbon snake (Thamnophis sauritus sackenii) and, later that night, a banded water snake (Nerodia f. fasciata) as they lay quietly on the road edge.

Earlier that day we had seen dozens of big alligators (Alligator mississippiensis), most of them still skinny from their winter-induced fast, sprawled in the noontime sunshine. We warily eyed a couple of 8-footers lying at trail edge knowing that the creatures were now a bit more alert, and potentially a bit more dangerous, than they had been only a week earlier.

But now it was the possibility of hearing and seeing anurans in general, and treefrogs in particular, that drew us out. Darkness was falling around us, and the nippy air reminded us that spring had only just sprung. We slowed to get a better look at a  chuck-wills-widow sitting in the middle of a sandy road, then edged up onto a one-lane bridge and cut the engine off.

Quonk. Quonk. Quonk. The calls came slowly, at first, but picked up speed as the night progressed. We were hearing the green treefrog (Hyla cinerea), one of the South’s most beautiful and most abundant treefrogs. The night was far from perfect for frog watching. The sky was clear and sparkled with starlight. The humidity was very low (for Florida) and was allowing the temperature to fall much faster than I had hoped. But we made the best of our opportunities. 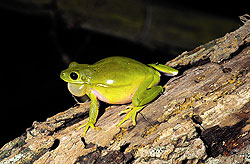 The green treefrog (Hyla cinerea) is one of the South’s most beautiful and most abundant treefrogs.

As we stood on the pond shore, a southern leopard frog (Rana sphenocephala utricularius) snored and then made a noise like fingertips being rubbed against an inflated balloon. A pig frog (R. grylio) grunted its bass notes from a patch of cattails. And Florida cricket frogs (Acris gryllus dorsalis) clicked stridently from nearby shallows.

We decided to move up the road a bit, intending to check a small forest pond that I knew to be a treefrog haven, and then move still further up the road in hopes of hearing carpenter frogs (Rana virgatipes).

As we left, a check showed that the temperature had already dropped from a daytime high of 83 degrees Fahrenheit to a comparatively chilly 62 degrees. It took about 20 minutes to reach the intended pond, and by then the temperature had dropped another couple of degrees. But the frogs didn’t seem to care.

Much of the Okefenokee Swamp is in southeast Georgia, but a small portion extends into northeast Florida. Roughly 396,000 acres of the 438,000-acre swamp are protected in the Okefenokee National Wildlife Refuge. The swamp is 38 miles from north to south and 25 miles from east to west.To the Indians, this giant peat-filled bog was the “Land of the Trembling Earth,” which modern adventurers can attest to when they stand atop some of the swamp’s peat islands.

We could hear an immense chorus of Florida cricket frogs before we even turned to nose our way toward the pond. As we got a little closer the shrill, rapidly pulsed trill of southern toads (Bufo terrestris) became evident, but over all echoed the hollow doooonks of barking treefrogs (Hyla gratiosa). It was one of the largest choruses I’d heard. The pond is small, perhaps three-quarters of an acre, and it is shallow. The water level fluctuates wildly, from about waist deep when normal rains have fallen to only 12 inches or so or even totally dry during times of drought.

Tonight the pond was almost full, and floating on the surface dooonking and tooonking were about 200 lovelorn male barkers. They were clad in skins of unicolor brown, brown with lighter ocelli, brown with dark spots, green with brown spots and solid bright green. They were at pond edge, scattered throughout the patches of emergent grasses, and gathered densely in the most distant and shallowest cove. The noise produced by the raucous throng was almost deafening. There were also a fair number of southern leopard frogs, but their calls seemed few and far between (or perhaps simply drowned out by the cacophony produced by the barkers and toads). 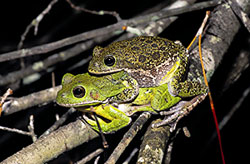 This pair of barking treefrogs (Hyla gratiosa) is in a mating embrace. They come in many shades and patterns, including plain brown, brown with lighter ocelli, brown with dark spots, green with brown spots and solid bright green..

No female barking treefrogs were seen among the males on our first circle around the pond, but by the time we started the second circle females began arriving. We encountered them both on shore and in the shallows. By the time we had completed the second circle, we had found a dozen or more pairs in amplexus. When we held out flashlights at eye level, we could see hundreds of little yellowish treefrog eyes reflecting back at us. It was an awesome sight.

As the beam of the light moved over the water surface from pond side to pond side, we eventually saw — right in he middle of one of the larger treefrog congregations — a single pair of bright orange-red eyes. These belonged to a baby gator. At just over 2 feet in length, the little crocodilian was quite likely filling its stomach with the barking treefrogs that were floating all around it.

Busy though it was that night, one species that was notably absent was the little pine woods treefrog (Hyla femoralis). Although only 1¼ inches in length, the tan to brown pine woods treefrog has a loud and distinct voice. In bygone years it was present in considerable numbers, but not a single example was vocalizing on this night.

Eventually, Jim decided he had enough photos, and we moved on to the carpenter frog habitat. This time we were not so lucky. Silence surrounded us in the inky darkness. Here and there, as we played the lights over the water’s surface, the eyes of a gator would reflect silently back at us, but the carpenter frogs were silent. 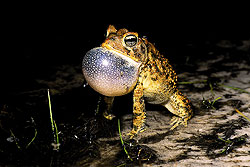 This southern toad (Bufo terrestris) fully inflates its vocal sac as it choruses with other nighttime creatures.

These interesting little coastal plain ranids enter Florida only in the extreme northeastern corner of the state where they seem to follow the water overflow from the Okefenokee Swamp southward. While Florida was in drought condition, the tiny portion of the state that constitutes the carpenter frog’s range was dry — almost sere. Some researchers believe that the carpenter frogs have disappeared from Florida, but this is not the case. On one evening in late 2003, a few short months after the return of the water to the region, a sizable group of the frogs was chorusing.

We were on our way back to Gainesville when I saw the little “toad” sitting on the side of a dirt road. Jim was still looking for an eastern spadefoot, so I stopped and backed up. The anuran was still sitting quietly in place. I could see when I looked from the car that the creature was a frog and not a toad as I had suspected. I looked harder and could just make out the fact that the frog had some tan stripes on its back. In our area, baby pig frogs are colored thus, and I told Jim, “Well it’s no spadefoot, but it looks like a pig frog.” Because pig frogs are not found in Jim’s Michigan homeland he decided to look more closely at the creature. That was a good call on his part.

He picked it up and noticed that the webbing of the hind feet stopped far short of the toetips. We had come across a carpenter frog, sitting on a dirt road on a dry night. Recently charred pineland stretched far to the north and south of the road, and as far as I knew the drainage ditches in the immediate area were dry. To top it off, we were quite a few miles (as the frog hops or the crow flies) south of the only habitat in the state that carpenter frogs were known to occur. Despite my initial misidentification, the finding of that frog truly made our jaunt worthwhile.

There are some questions in my mind as our spring advances. What, for example, has become of the ornate chorus frogs (Pseudacris ornata) in the region? It has now been four years since I have heard their loud, hammered-anvil peeps at any of the ponds where they are normally present. Is their absence just part of a normal cycle that is related to our periodic droughts and the resulting lowered ground water levels, or is there a more subtle and sinister reason? Likewise, there has been a reduction in my sightings of southern chorus frogs (Pseudacris n. nigrita). Although not completely absent like the larger ornate chorus frogs, the tiny winter-breeding southern chorus frogs are no longer calling from many of the ditches where they were once commonly heard. 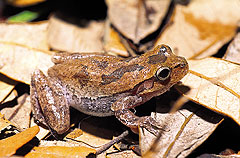 The tiny pine woods treefrog (Hyla femoralis) may only be 1¼ inches long, but it makes up for its size with its loud and unique-sounding call.

Rainfall in our region in 2003 was almost normal. We now have water back in many of the ponds that had been dry during the lengthy drought. It will be interesting to monitor the nearby anuran populations for the next few years, and especially those species that depend largely on ephemeral ponds. Will the ringing peeps of ornate chorus frogs again be heard? Will the ratcheting calls of southern chorus frogs persist? Or will our spring, the traditional season of the frogs, become increasingly silent?