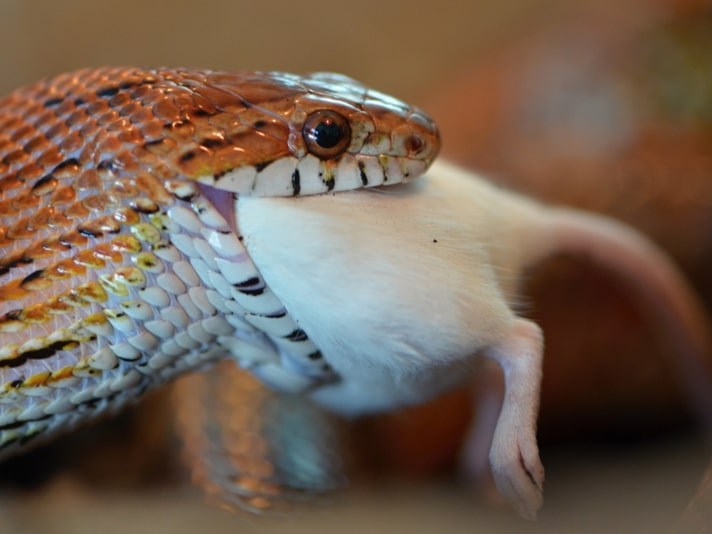 Should you feed your snake rodents that are dead or alive?

Is it better to feed live or dead rodents to my snakes?
Ian Shattuck, Hicksville, New York 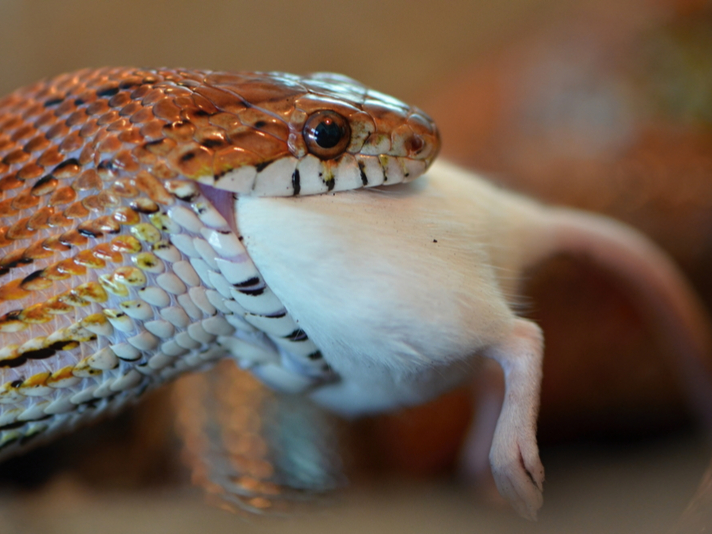 I believe nature has deemed the snakes’ methods of vanquishing prey, developed over millennia, as suitably fast and “appropriate.” Some will disagree.

“Better” can be interpreted from two different viewpoints—that of the snake, and of you. The rodent doesn’t come out alive either way, so we’ll ignore that third potential viewpoint.

Rather than decide your ethics for you, as plenty of other people are surely willing to do, I’ll list pros and cons. Then you can decide which works best for you based on facts rather than emotions. I’m presuming we’re talking about the feeding of domestically raised rodents, by the way.

On the pro side of feeding live rodents, snakes get the chance to interact more naturally by subduing living prey. It’s what they were designed to do, and they usually do it with great efficiency. In captivity, a snake’s life can become very sedentary. Chasing down and/or constricting live rodents lets a snake “come alive” temporarily, using all its muscles in the struggle. I can’t say if it’s good psychologically for the snake, but the exercise will certainly be good for it physically.

Conjecture about whether a venomous snake is aided in its digestion of a rodent meal by first injecting venom makes this one harder to state with certainty. I lean toward believing that it’s helpful, especially when vipers swallow huge meals. If venom begins the digestion from inside as digestive juices dissolve their way in, it might speed up a process that otherwise might cause a large meal to start rotting inside the snake’s gut. This could be very important in captivity, where ideal digestion temperatures and other conditions may not be optimal.

A benefit of using frozen/thawed rodents is that digestive breakdown of meals occurs more rapidly. Plus, if the rodents harbor any internal parasites, freezing will likely kill the vast majority of them. It is possible, however, that all protozoan pests—the ones to be more concerned about—are not completely destroyed by freezing at home freezer temperatures.

On the con side, facing off with a toothy rodent will always be a risky venture for a snake. Yes, rodent-eating species are equipped with finely honed skills for subduing their meals via constriction, or with some, highly evolved “tools” to deliver venom. But the effort is still fraught with danger for the same reason you wouldn’t use your bare hand to grab a pesky wild mouse or rat discovered in your pantry.

Rarely do rodents walk away from a snake encounter alive, but there’s a time lag in their dying of anywhere from several seconds to a couple minutes between the moment of initial contact to death. During that brief period, especially against constrictors, rodents fight back with everything they can muster. That means biting viciously to inflict a wound grave enough to cause the attacker to release its hold.

Besides my having personally seen numerous scarred snakes in the field, it’s easy to imagine that injuries from rodents are even more prone to happen in captivity where captives are trapped in close proximity to their prey.

The other main point argued is whether captive-raised rodents are dispatched in a rapid (humane) enough manner. I believe nature has deemed the snakes’ methods of vanquishing prey, developed over millennia, as suitably fast and “appropriate.” Some will disagree, and even try to pass laws to force their own views on everyone else. Such is the case in Great Britain, where feeding live food to reptiles is illegal. Fortunately, in the U.S., we still have a choice of how to handle this based on our individual preferences.