Exhibit features two of the rarest of salamanders

Baltimore's Maryland Zoo has just opened a new exhibit dedicated to the Hellbender salamander (Cryptobranchus alleganiensis), one of Maryland's rarest animals. The $200,000 exhibit features two of the amphibians, also known as snot otters, devil dogs, or Allegheny alligators. According to the zoo, the exhibit is crafted like that of the hellbender's natural habitat, which is comprised of clear and cold mountain streams with riffles. They spend most of the day underneath flagstone rocks, which are flat, as well as logs. They come out at night to feed, mainly on fish, crayfish, and other invertebrates. The hellbender is the third largest in the world and weighs approximately 4 to 5 pounds and measure up to 30 inches. 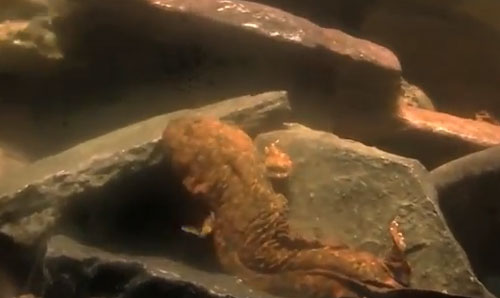 Those working on the exhibit actually created molds of rocks found in the hellbender's natural habitat and incorporated those copies into the exhibit. They're just a really unique animal that has all kinds of unique adaptations for living under water, said Kevin Murphy of the Maryland Zoo. They have a paddle like tail, they are amazing swimmers, he said.

Hellbender salamanders are generally flat and their skin is folded and wrinkled. They breathe by absorbing oxygen through their skin, which is covered in mucus. They can live up to 30 years. Their entire life is spent in the water; live alone, except when mating, when they live in groups of around 6 to 12 animals.