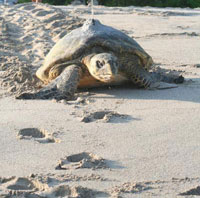 Not all sea turtles rely on the ocean reef ecosystems for food, according to a paper published in the online scientific journal Biology Letters. In the paper, scientists detail how they attached satellite transmitters to the shells of 12 adult female hawksbill sea turtles (Eretmochelys imbricata), an endangered species, in an effort to track their movements in the Eastern Pacific. What they discovered was rather significant, in that the sea turtles did not inhabit any reef ecosystems, as previously thought, but rather were found in inland mangrove estuaries in the Central American countries of Ecuador, El Salvador, Honduras, and Nicaragua. The findings completely dispelled the notion that all sea turtles spend their time foraging on coral reefs. 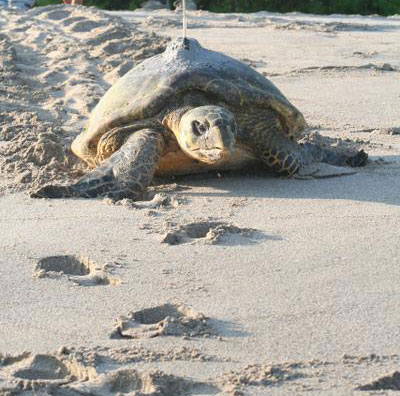 Alexander Gaos, co-founder of the Eastern Pacific Hawksbill Initiative and lead author of the paper says that the hawksbill turtles may have made the mangroves their home turf because of a lack of coral reefs in the region. He noted that 83 percent of the turtles that were tracked via satellite transmitter remained in the mangroves.

"Eighty three percent of the adult hawksbills we tracked stayed or settled in mangrove estuaries, so that is the dominant behavior in the region" Gaos told REPTILESmagazine.com. "Amazingly, many of the turtles we tagged were also nesting on the shores within the estuary (no other species would do this, only hawksbills), then just remain in the estuaries after nesting. This has some important conservation implications as it provides a restricted conservation target area, but it also increases threats because if those estuaries are destroyed through activities such as coastal development and/or shrimp aquaculture (both of which are currently growing at an alarming rate at our sites), it could wipe-out both nesting and foraging sites. . . that could quickly spell doom for hawksbills in the eastern Pacific. . . there are only an estimated 500 adult nesting female hawksbills left in the entire eastern Pacific. Regarding foraging strategy and 'dwelling' areas, it is important to point out that strategies do exist in the eastern Pacific as the other 17% utilized the traditional rock and coral reef habitat."

Gaos says it is still unclear what the hawksbill sea turtles are eating in the mangrove forests, but he point to anecdotal reports that indicate a diet of mangrove shoots, benthic invertebrates, shellfish, algae and sponges that grow on the roots of mangroves and submarine rock outcrops within the estuaries. He is currently researching the diet of the mangrove dwelling hawksbill sea turtles and will likely compare that with their reef foraging counterparts in other areas of the world.

The hawksbill sea turtle (Eretmochelys imbricata) family, Cheloniidae can be found in tropical and subtropical regions of the Atlantic, Pacific, and Indian Oceans. It weighs around 95 to 165 pounds, and averages about 2 1/2 feet in length. It is said to reach maturity at 30 years, and live from 30 to 50 years. It nests about four to five times each season and deposits around 140-150 eggs per clutch, every 14 days. The turtle has been listed as an Endangered Species since 1970.