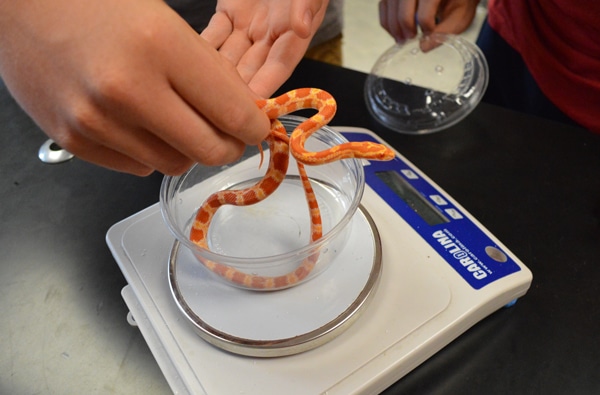 Growth Rate Data Of Snakes Fed Once And Twice A Week

Two years ago I was assigned a 35 minute science enrichment class where I was given the freedom to instruct however I see fit.  Last year I used

Two years ago I was assigned a 35 minute science enrichment class where I was given the freedom to instruct however I see fit.  Last year I used the time to teach the scientific method and data analysis by using baby corn snakes.  At the beginning of the year, my students created hypotheses regarding snake growth and how it might be related to certain characteristics such as gender and color mutations. (See; Neonatal Corn Snake Growth)

Getting Young Corn Snakes To Eat 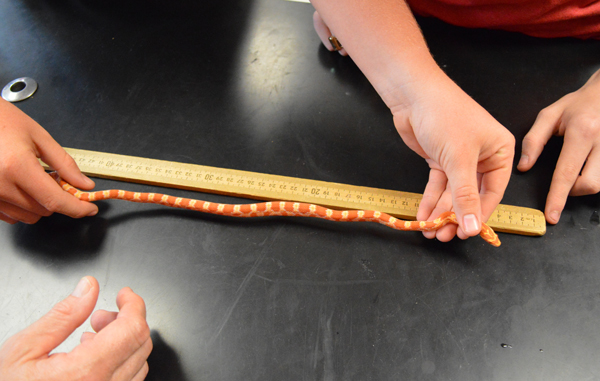 The subject corn snakes were measured each month.

This year, not wanting to repeat the same experiments, I asked the students what they might want to learn about these snakes that we could physically determine by good scientific procedure.  One interesting idea that came up was the relationship between food and growth rate.  If a snake were fed twice as much as another, would it literally grow twice as much?  This sounded like a great experiment to undertake.

We used eight baby corns that were born in July of 2014.  Four of them (Snakes 1 – 4) served as a control, and were fed a F/T pink every Tuesday, once a week.  The other four (Snakes 5 – 8) served as the experimental group and were fed again on Friday, as well as Tuesday.  All were kept in standard plastic shoeboxes in the back of my classroom and all neonates were born of the same parents in the same clutch.  Every Monday, the snakes were massed and length was measured.  The mass is accurate, however, due to the nature of measuring a squirming baby snake, the length cannot be guaranteed to be as precise.  (These were 9th grade students doing the data collection!)  We also massed the pinks each time they were fed to be sure that no one snake was getting larger pinks than the others.

The average measurement for each month is recorded below. Because of winter break and exams, no data was collected in December. 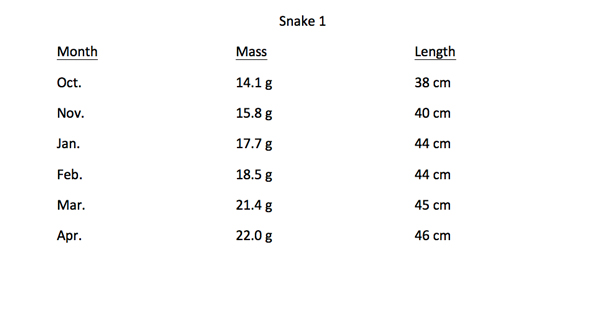 Snakes 1 through 4 were fed once a week. 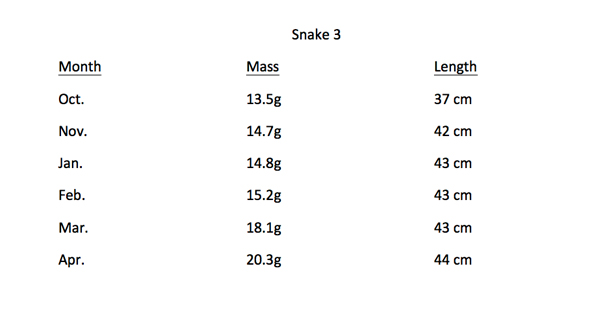 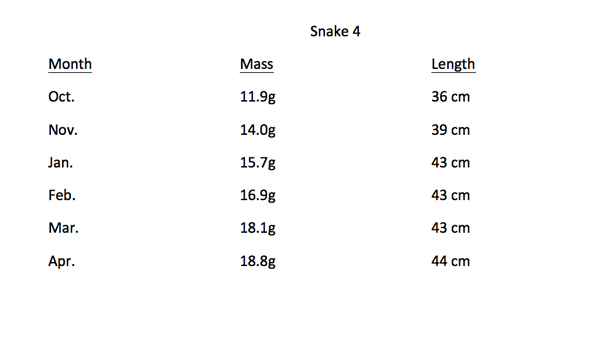 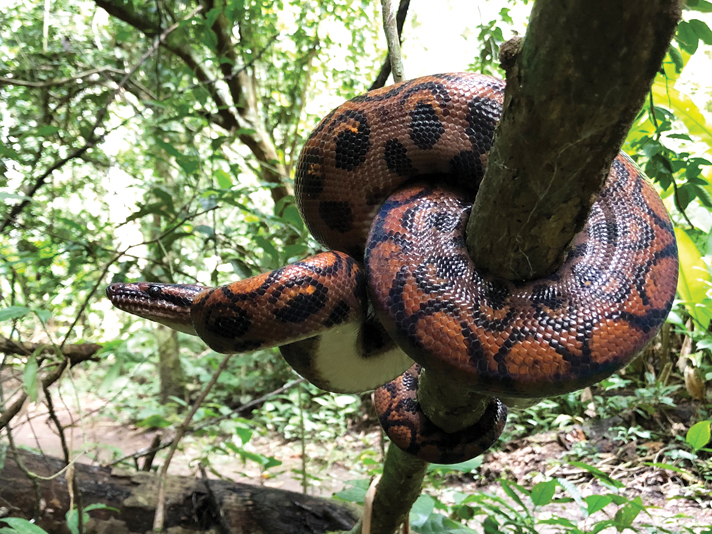 Snake 6 stopped feeding for a month. 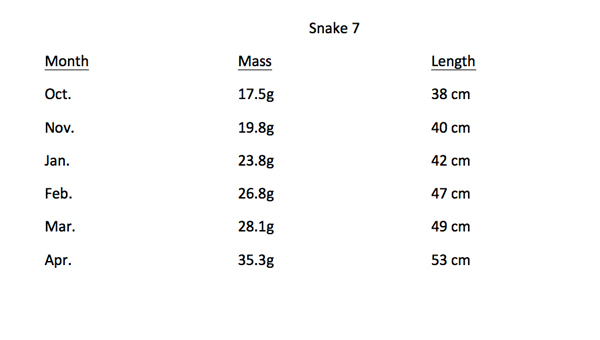 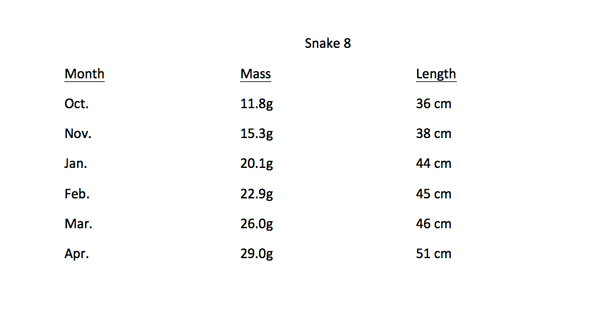 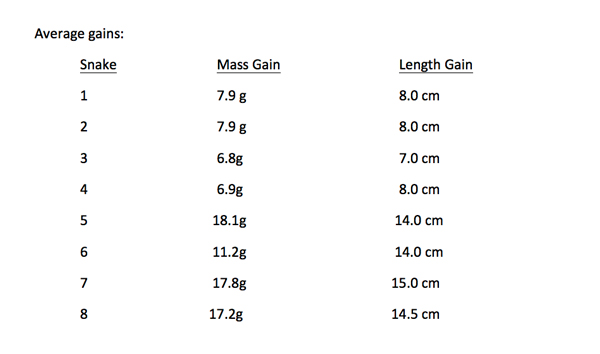 According to our results, the snakes that were fed twice as much, did indeed have a mass gain of more than two times that of the control group.  Length gain, although not as accurate, was also very close to twice that of the control group.  The only exception was the mass gain by experimental group snake number six.  This snake stopped feeding for four weeks during late Feb. and March. 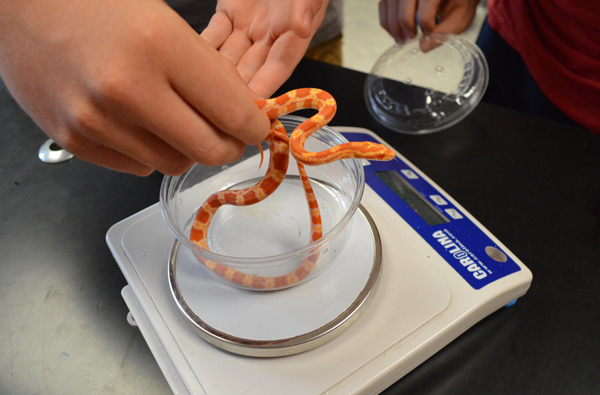 Average gains in weights of snakes 5-8 were more than double the control snakes with one exception, snake six which went off feed for one month.

Although most of the students hypothesized that this would happen, it came as a bit of a surprise to me.  I have bred and kept snakes for many years, and although I guessed the snakes that were fed more would grow more, I didn’t think it would actually be over twice as much as depicted by our data.

The kids really enjoyed this experiment.  They learned a great deal about corn snake husbandry while also experiencing many of the intricacies of real life data collection.  Several of the students who were afraid of the snakes to begin with have developed an actual affection for their charge.  I believe that there is much more to science education than just text books and cookie cutter labs.  If the kids can develop a healthy respect for the natural world and all its denizens while learning good scientific procedures, they are learning real science.