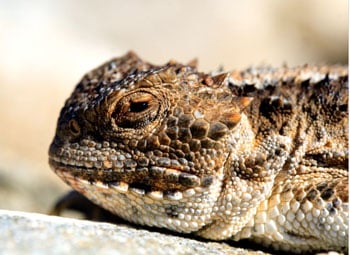 Canadian Dr. Shelley Pruss, a species conservation specialist is attempting to learn more about the greater short-horned lizard (Phrynosoma hernandesi), a reptile so rare in Canada that Parks Canada biologists have observed it just one time in the wild. The lizard, which can be found in Canada as well certain states in the western United States, lives in Grasslands National Park, which is located in south west Saskatchewan. It can also be found in south east Alberta. 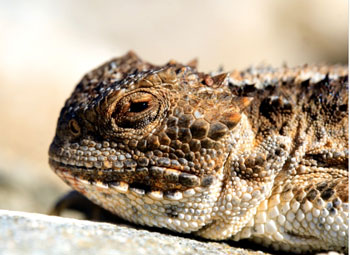 The armored lizard, called the iguana of Canada and the horny toad in the United States, is currently on Canada's "at-risk" list of species. Pruss told CJME News that scientists are hoping to learn more about their environment so steps can be taken to protect the reptile and get them downgraded from Canada's list of at-risk species. The greater short-horned lizard is one of seven native species of lizard in Canada. The other lizard species that can be found in Canada include the Northwestern Alligator Lizard (Elgaria coerulea principis), Western Skink (Eumeces skiltonianus), Northern Alligator Lizard (Elgaria coerulea), Pygmy Horned Lizard (Phrynosoma douglasi), Five-lined Skink (Plestion fasciatus), Northern Prairie Skink (Plestiodon septentrionalis septentrionalis), and the Skilton's Skink (Plestiodon skiltonianus skiltonianus). The European wall lizard (Podarcis muralis) was introduced in 1970 and can be found on southern Vancouver Island.

Horned lizards can be found in Canada and in several states in the western United States, including Texas, Oklahoma, California, Arizona, and New Mexico. Horned lizards primarily eat ants. Because of their diet, they don't make for good pets.