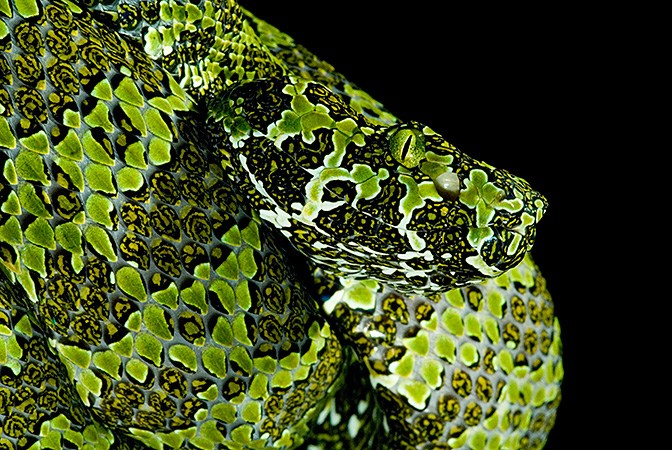 Vipers are some of the world's most beautiful predators, patterned with vibrant warning coloration and markings. The Viperidae group is&

Vipers are some of the world's most beautiful predators, patterned with vibrant warning coloration and markings. The Viperidae group is broken into two subfamilies including the True Vipers and the Pit Vipers. Unfortunately, their beautiful patterns and elusive lifestyle make them difficult to study and sensitive to exploitation.

The Mangshan Viper (Protobothrops mangshanensis), endemic to mountainous regions in China, is one of the largest venomous snakes in the world. As adults, they max out around 6 feet and can be considerably heavy bodied, reaching over 10 pounds. They are listed as endangered and few individuals remain in the wild. Fortunately, conservation programs have been successful so far.

When it comes to venomous snakes, there are different categories of venom and teeth. Vipers, in the family Viperidae, have the most elaborate and advanced venom delivery systems. They have the largest venom glands out of the venomous snakes which is connected to a large mass of muscle, designed to pump venom into their prey. Venom is a complex mixture of modified saliva, designed to target the molecules inside the body of other animals. The purpose of this is to immobilize the prey and predigest it for the snake to swallow it whole. This is particularly helpful to Vipers who have inefficient digestive systems. There are four types of venom that affect the body differently:

Each venomous snake has species specific characteristics relating to their potency, methods, and capabilities, but there are some generalities. There are four types of venoms, and three types of fangs, designed to inject and immobilize prey. In the Elapids (Sea Snakes, Cobras, Mambas), the teeth are short and hollow, called Proteroglyph​ teeth. In the Vipers, the teeth are long and hollow, called Solenoglyph fangs. The key difference between these fang types is the position they are in the mouth. In Vipers, the fangs are able to fold up in the mouth when they are not in use. This is why Vipers have the longest fangs in the world! In Elapids though, with Proteroglyphous fangs, they must be short because the cannot fold. The last type of venomous fangs are the Opisthoglyphous fangs, which are found in the Colubridae family which includes nonvenomous, venomous, and mildly venomous snake species. These types of fangs are found in the back of the mouth rather than the front (Elapids and Vipers), which makes envenomation more difficult. The snakes are usually required to "chew" on the prey to deliver the venom properly, but this can still be deadly in some species (like the Boomslang.)

The Mangshan Viper is a species of Pit Viper under the subfamily Crotalinae. It is beautifully colored with bright green scales and eyes, which aids them in cryptic camouflage among an isolated (and elevated) mountainous regions in China. They are ONLY found in very specific regions, including the Mangshan Mountain range and Ruyuan, Guangdong Province. The species' common names include: the Mount Mang Pit Viper, Mangshan Iron-head Snake, Mangshan Viper, Mangshan Pitviper. As a heavy bodied snake, they favor a terrestrial lifestyle in the lush wet forest floor, where they feed on insects, amphibians, and mammals. They hunt at night because they are nocturnal. Unlike other Vipers, they lay eggs (instead of oviviparous live birth) and actively guard them until they hatch. 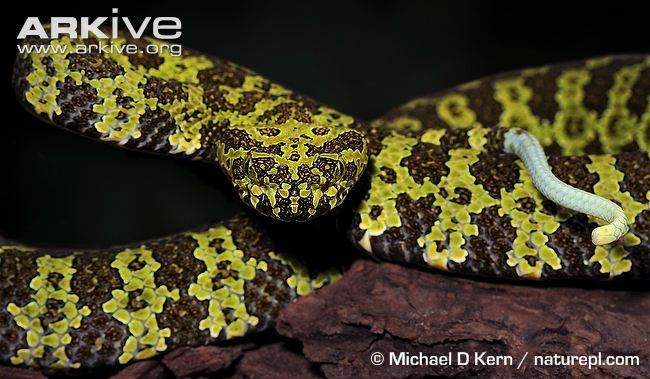 The species is extremely rare, with only 500 individuals being documented in the wild. Since the Mangshan Viper is from such a small region, any threats are a huge risk to the species' conservation. Since it was discovered in the 1980's, they rapidly declined from illegal logging, bushmeat, and illegal pet trade. Luckily, the species is listed as CITES II and is closely monitored and protected. Thankfully, many countries, including the US, have established breeding programs for the species which have been successful. A recorded 100 hatchlings have been born in captive programs so far.