Efforts around the world are underway to recover declining turtle populations.

This article is the second in a series written to raise interest in turtle conservation efforts by the Turtle Conservation Fund (TCF).

A low flight over a tropical river, like the Trombetas in the Brazilian Amazon Basin or the Orinoco in the Venezuelan Llanos, is probably the best way to get a sense of the might of such waterways. Although the settings of the two rivers are completely different – the first located in the largest tropical forest on the planet, and the second in the largest grassland floodplain – these two South America rivers have much in common. 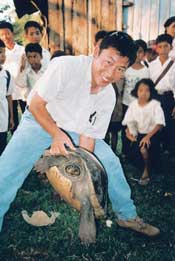 At first glance the exposed sandbanks of these ever-changing rivers may seem devoid of life, but upon closer examination one can see that the upper parts of some dunes are sprinkled with hundreds of shallow craters, about 3 feet in diameter. The nature of these mysterious depressions can be discovered after dusk, when the reptilian architects of these hollows emerge from the water to perform their ancient rituals.

These river turtles are as big as some sea turtles, but instead of flippers they have feet and retractile, side-bending necks. They are the arrau or giant South American river turtle (Podocnemis expansa), the largest species of side-necked turtle in the world, with shells 2 1/2 feet in length.

The female arrau turtles gather together, congregating in large masses at the edge of their chosen islands. Like sea turtles, these turtles are migratory, traveling hundreds of miles up and down rivers each year; each will dig its single nest for the season in a sandbank. After nightfall, they emerge and crawl somewhat cautiously to the highest ground, advancing haltingly in overlapping swarms of movement, ever ready to retreat tumultuously into the safety of the river.

Hundreds of turtles can be seen nesting and crawling in the moonlight, scraping the sand, digging body pits and nesting chambers and spraying sand. Each female lays 70 to 80 eggs, resulting in tens of thousands of eggs laid each night on a single sandbank in a huge, tropical wilderness.  The spectacle is overwhelming and inspiring. 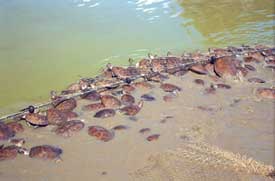 These juvenile Podocnemis expansa are being raised for food and breeding stock at a turtle farm near Manaus, Brazil.

Halfway around the globe, a similar spectacle plays out in a few isolated rivers of tropical Southeast Asia, especially Malaysia, where the giant river terrapin (Batagur baska) nests communally in much the same way as Podocnemis, but with a remarkable and audible difference. As the female turtles finish nesting on the sandbanks, they cover their nests and then actively tamp down the sand with their plastrons. The turtles' tamping action sounds like drums playing primeval staccato rhythms. The Malaysian name for the giant river terrapin is tuntong, describing the sound that reverberates when the turtles are covering their nests.

The giant river terrapin, and the closely related painted terrapin (Callagur borneoensis), are both large and very thick-shelled species, and the males are renowned for undergoing brilliant color changes to the head during the breeding season. Both species can be found in the estuarine habitat that is the gateway between fresh and marine waters. 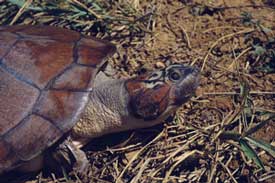 Found in the salty, mangrove-lined estuaries and the mouths of large Asian rivers, giant river terrapin adults are herbivorous, feeding on ripe mangrove fruits from branches that dangle in the brackish water during high tide. However, for their communal nesting, females travel upriver to where the water is fresh and tea-colored. The painted terrapin females, on the other hand, have a different strategy – they leave the estuaries and head out to nest in fairly large numbers on open ocean beaches, where they sometimes nest side-by-side with marine turtles.

Chelonians on the Edge

Unfortunately, the palatability of turtle eggs and meat has led to the widespread and intense exploitation of these and other river turtles, to the extent that they have been extirpated from many of their former nesting sites. Several species, such as Kachuga trivittata in Burma, now hang on the verge of extinction. However, TCF partner organizations are funding field surveys to assess the current distribution and status of Kachuga trivittata. 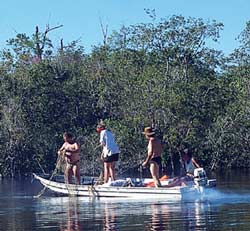 These researchers are setting seines to study the habitat use of Podocnemis during the flood season.

The arrau was once so abundant that it was the mainstay of far-flung Amazonian and Orinoco economies as local industries developed to exploit the meat and eggs of the nesting female turtles. Famed German scientist and explorer Alexander von Humboldt witnessed the massive destruction of eggs firsthand during his historic voyage at the end of the 18th century. In 1811, he made some rough calculations of the extent of exploitation of eggs for oil production from the R’o Orinoco beaches; he noted, "5,000 jars of oil were harvested annually. Assuming that a jar contains 25 bottles of oil, each bottle being the production of 200 eggs, and allowing for the wastage of eggs damaged in the nest, 33,000,000 eggs had been harvested to fill the 5,000 jars."

Similarly, the huge former congregations of the giant river terrapin are now gone, decimated by decades of uncontrolled exploitation. In earlier times, the nesting beaches were protected by royal decree from the Sultans of Perak, who issued limited licenses to official egg collectors who harvested eggs in sustainable numbers, allowing the populations of adult turtles to remain intact. However, the patterns of use changed, the Sultans lost their control, the turtles lost their protection, and gradually the harvest disappeared as turtle populations were decimated and extirpated by unsustainable collection.

In the last few decades a massive international trade in these animals has emerged. Huge numbers of river turtles from all over Asia have been flowing into Chinese food and traditional medicine markets, as well as into the international pet trade. This has affected all species of Asian turtles and continues to drive most of them into rapid demise. The trade also is beginning to affect non-Asian species. 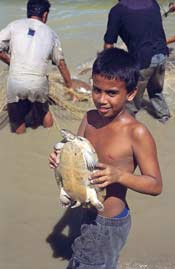 A young boy holds a juvenile Podocnemis expansa at a farm in Brazil. Sustainable farming of turtles can provide local people with income and protect wild populations at the same time.

Trade data from the late 1990s indicate that over 15,000 metric tons of turtles were exported annually from Southeast Asia to China, representing over 10 million turtles per year, or nearly 30,000 turtles per day. Despite national and international efforts to curb that trade, it continues nearly unabated, shifting from one geographic area to another as the local turtle populations crash.

These exploitation pressures on river turtles far exceed their abilities to compensate. A single turtle requires many years to grow from a hatchling to a mature adult. Although many hatchling and juvenile turtles naturally succumb to predators, once  turtles reach adult size and their shells become thick and strong, they usually survive for a long time, remaining reproductively active for their entire life spans (over many decades). It only requires a few successful hatchlings to grow to adulthood over the reproductive lifetime of each female for turtle populations to remain stable. However, this only works if the females live out their normal life spans.

We can design sustainable programs to allow for the harvest of turtle eggs, and we can raise juvenile freshwater turtles for food, if necessary, in domestic turtle farming operations. But the large-scale commercial harvest of wild adult turtle populations is totally unsustainable. Their life history strategies simply do not allow for it.

It is clear that the giant river turtles of South America, notably Podocnemis expansa and its slightly smaller cousin P. unifilis, are declining in numbers. Uncontrolled hunting of both adults and eggs for food has resulted in fewer female turtles emerging on sandbanks to nest. In some areas, historic nesting beaches have become devoid of nesting turtles altogether. However, through the investments of conservation-minded individuals and organizations, various beneficial management efforts are being initiated.

In Brazil, the government has encouraged farming of Podocnemis, while at the same time enforced new regulations that prohibit the capture of wild river turtles. A program was initiated that provides potential "turtle farmers" with hatchling Podocnemis as a one-time opportunity. The farmers can either raise the hatchlings to a certain size and then sell them for food, or they can raise the hatchlings to reproductive maturity and then sell the next generations of hatchlings indefinitely. 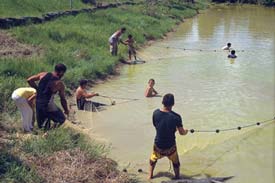 These local workers seine captive giant river turtles at a farm in Brazil.

There in no continual source of turtles from the wild, thus this is not a ranching operation and farmers must take good care of the animals they are given. It remains to be seen if this type of turtle farming can be economically sustainable in the long-term. The TCF would like to contribute funds to research that will assess the growth rates and health of these captive turtles and thus contribute to the sustainable management of these populations.

Podocnemis expansa and P. unifilis have other lesser-known cousins in South American rivers. Podocnemis lewyana is an enigmatic species from the Magdalena River Valley in Colombia. Recently, the TCF solicited a proposal from Colombian field biologists who are poised to assess the distribution, habitat use and conservation status of this species. Obtaining this information is crucial to the development of conservation management plans for the species. The TCF hopes to fund the project in the near future, partially with funds received from the readers of REPTILES (see box).

Lastly, some Podocnemis species are still collected illegally. When illegal shipments are confiscated, other partner organizations of the TCF, notably the Turtle Survival Alliance (TSA), can assist law enforcement officials by using these animals to build assurance colonies. The assurance colonies may provide the source for eventual repatriations to protected areas or can provide turtles for university research that will produce published results that will aid in the management of these species in the wild.

Efforts around the world are underway to recover declining turtle populations. In both Brazilian and Venezuelan Amazonia, a number of arrau nesting beaches are now protected by government authorities and research programs.

In Cambodia, a previously unknown population of the giant river terrapin was recently discovered. Through the efforts of the Wildlife Conservation Society (WCS) and financial support by Conservation International's Center for Applied Biodiversity Science, Disney's Wildlife Conservation Fund and the Cleveland Zoological Society, a protection program was established. Local residents along the Sre Ambel River have been hired as guards to protect the nesting beaches so that the eggs and females are not disturbed or collected. Enforcement efforts target fishermen who illegally spearfish adult turtles in the mangroves at night. The government of Cambodia declared the giant river turtle to be the "Royal Turtle of Cambodia," affording the species some of the royal protection it enjoyed long ago.

In Australia, students from the University of Canberra will be conducting genetic research. That work will be applicable to efforts to properly manage captive assurance colonies of Batagur. These colonies include animals obtained during the famous confiscation and rescue of 4,000 turtles in Hong Kong in December 2001. The TCF hopes to help support this continued effort and others like it to conserve Batagur.

No single organization or group can conduct and manage all of the various conservation efforts needed for each turtle species. However, the Turtle Conservation Fund strives to be a vehicle by which all groups can communicate, prioritize and connect their activities, and build effective, multifaceted programs for each threatened turtle species.

Once again we hope that REPTILES' readers will support the efforts outlined in this article (see box), and know that by contributing they become part of a larger effort to save the world's turtles. These types of comprehensive collaborative programs are the hope for the future of all threatened turtle populations.

How To Help The TCF

Check contributions can be made out to the Turtle Conservation Fund and sent to Dept. R2, c/o Conservation International, 1919 M Street NW, Ste. 600, Washington, DC 20036. Thank you for your help.