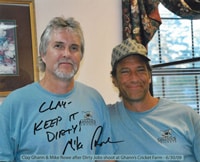 Ghann’s Cricket Farm is slated to appear on an episode of the Discovery Channel’s T.V. series Dirty Jobs.

Ghann’s Cricket Farm, a producer of live crickets and other feeder insects, is slated to appear on a Jan. 12 episode of the Discovery Channel’s T.V. series Dirty Jobs.

During the segment, the show’s host, Mike Rowe, travels to the Ghann farm in Augusta, Ga., where he helps breed, capture and package the crickets. Farm President and CEO Clay Ghann said Rowe also learns a thing or two about cricket manure. According to Ghann, cricket manure makes an excellent organic fertilizer, and the farm sells it as such under the brand name CricketPoo.

How did Ghann’s Cricket Farm end up on Dirty Jobs? Ghann said producers contacted him in December 2008 after one of his customers recommended the farm for the show. After a few months of discussions, the crew filmed the episode during a day-long shoot in June 2009.

Overall, Ghann said the experience was “a lot of fun, truly an experience we will never forget.”

The episode featuring Ghann’s Cricket Farm airs on the Discovery Channel on Jan. 12 at 9 p.m. EST. According to Ghann, a smaller segment featuring the farm’s mealworm operation is slated to run during a Jan. 19 episode of Dirty Jobs.