Rattlesnake roundups are steeped in tradition yet remain controversial. These roundups tend to provide tourist dollars to the towns that host them at the expense of local rattlesnake populations. The Center for Biological Diversity, Coastal Plains Institute and Land Conservancy, and One More Generation, have sent a letter to Georgia wildlife officials asking them to enforce the existing laws on Georgia's books that are written to protect animals and people at so-called rattlesnake roundups. 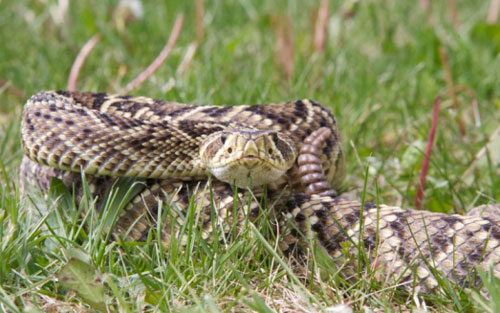 The eastern diamondback rattlesnake preys primarily on rabbits, rats and other small rodents.

These contests, according to the center, involve hunters who capture rattlesnakes, milk the snakes for their venom, and then butcher them for their meat and skin. Two roundups are held each year in the state of Georgia, a January event in Whigham and a March event in Claxton, the center said. In their letter, the environmental groups asked those who possess a wild rattlesnake to acquire a "wild animal license" from the state's Department of Natural Resources as required by law. They ask that law enforcement take appropriate measures before and during the roundups to ensure that the sponsors of these events have the appropriate insurance and treat the snakes in a humane manner.

Possession of wild rattlesnakes without a license is against the law in Georgia for good, common-sense reasons, and the state needs to make the law real by enforcing it, said Collette Adkins Giese, an attorney at the Center for Biological Diversity who works to protect rare and vanishing reptiles and amphibians. But the best way to stop the abuse of animals, make sure no one gets hurt, and save the eastern diamondback from extinction is to just cancel these roundups. The bottom line is, they’re cruel.

The groups maintain that these roundups are significantly reducing the population of Eastern diamondback rattlesnakes (Crotalus adamanteus), and that analysis of data from four of these roundups show a steady decline in weight of captured animals as well as the number collected. In addition to hunting pressures, these snakes are declining due to habitat loss and death by motor vehicle on the state's roads, the groups said.

The eastern diamondback rattlesnake is a venomous snake with a range throughout the southeastern United States from southeastern North Carolina to Florida and the Florida Keys, southern Mississippi to Eastern Louisiana and Georgia. Its native habitat includes forests, swamps, woodlands, and prairies. It preys primarily on rabbits, rats, and other rodents as well as certain birds. It is the largest rattlesnake species and average 3 1/2 to 5 1/2 feet in length.