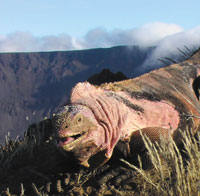 Galapagos pink iguana identified, soon to be named and described.

Although first sighted in 1986, new research discloses to the world the existence of a new species of pink iguana for the first time. Until now, its existence was never officially documented. The findings come from the research project led by Gabriele Gentile, based at the Tor Vergata University in Rome, Italy and announced in the journal Proceedings of the National Academy of Sciences.

The pink iguana is characterized by multiple series of very rapid ups and downs of the head. For its pattern and the frequency of ups and downs the pink iguana has no match with any of the other species or populations of land iguanas in the Galapagos. The comparative full description of its behavior, along with a detailed analysis of the distinguishing genetic and morphological features, along with the assigned scientific name is in the formal description of the species, which will be announced in an upcoming paper.

This identification of the pink iguana is one of the outcomes of a broad project aimed at the conservation genetics of land iguanas from the Galapagos. The Galapagos research team is in need of further funding to continue to investigate and protect this newly recognized species before it becomes extinct. Those interested are encouraged to contact: