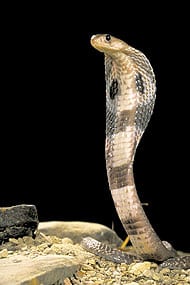 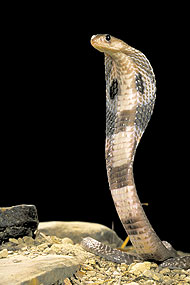 Clyde Peeling's Reptiland has a fine collection of venomous snakes, including this Asian cobra (Naja naja).

"Reptiland is the realization of my life-long dream," said Peeling. "I've spent the last 40 years doing what I love to do and it's satisfying to see it flourish as a family business. Today our operations reach far beyond what I envisioned in 1964."

One of Reptiland's special programs takes place during the month of October, and it offers an alternative to the usual Halloween offerings. The Flashlight Safari gives visitors a chance to explore the zoo during the evening, with the lights out and flashlights on. This way people can see nocturnal reptiles and amphibians when they are most active.

A reptile zoo would seem to be a little out of place in Virginia's beautiful Shenandoah Valley, but that's just what you'll find in Luray. The Luray Zoo boasts alligators, crocodiles, lizards, turtles and one of the largest collections of venomous snakes anywhere – 45 venomous species, including 16 rattlesnake species and eight different kinds of cobras. The Luray Zoo is the only zoo in Virginia that presents a live venomous snake show. 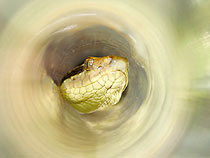 At the Kentucky Zoo handling tubes are one of the methods used to safely work with venomous snakes, such as this St. Lucian lancehead (Bothrops caribbaeus).

"You should be proud of yourself, mate, this is the best zoo we've been to in the States," said the Crocodile Hunter, Steve Irwin, during a 1998 visit.

Sitting in the shadow of Tennessee's majestic Great Smoky Mountains near the town of Sevierville is Rainforest Adventures. With more than 100 snake species, including cobras, rattlesnakes, green mambas and pythons, Rainforest Adventures features one of the more impressive U.S. snake collections. A healthy contingent of lizards and chelonians are also represented. There are numerous interactive displays and some live, up-close encounters with some of the more user-friendly residents.

About 90 percent of the animals at the Kentucky Reptile Zoo in Slade, Kentucky, are venomous snakes. These include four species of mamba, coastal taipans, Collett's snakes, Japanese mamushis, Okinawan habus, several lancehead vipers (including the St. Lucian lancehead), Grand Canyon rattlesnakes, albino rattlesnakes and several Iraqi vipers. The zoo is also home to a variety of pythons, anacondas, lizards, turtles and Fluffy the alligator. Exhibits are rotated, and about 100 animals are on display during the zoo's season.

Florida Circuit
There are 23 living species of crocodilians in the world today, and the St. Augustine Alligator Farm in St. Augustine, Florida, has representatives from all 23 – reason alone to pay a visit.

The Alligator Farm was the home of saltwater croc Gomek from 1989 until his death in 1997. At the time of his death, Gomek weighed in at nearly 2,000 pounds. He was 17 feet 91Ú2 inches long and one of the largest crocs ever put on display. Because of the miracle of modern taxidermy, visitors can still see Gomek on display.

St. Augustine has about 1,100 crocodilians, including several albino alligators from the Louisiana bayous and current stud Maximo, a 15-foot 3-inch saltwater croc from Australia that hatched in 1971 and could live for another 50 years. 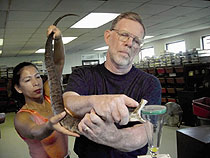 Reptile World Serpentarium, in St. Cloud, Florida, was established in 1972 as a research facility for the production and distribution of snake venoms. It opened to the public in 1976. Visitors learn about the natural histories of reptiles from around the world and get to view them (including cobras, mambas, various vipers and rattlesnakes) in indoor exhibits. Additionally, iguanas, turtles and alligators are on view in outdoor enclosures.

Besides Swampy (see "Giant Roadside Herps" sidebar), Jungle Adventures, in Christmas, Florida, offers several shows and attractions, including daily alligator feedings. A wildlife show lets visitors see native Florida wildlife up close, and provides an opportunity to hold a baby alligator and take pictures with an endangered Florida panther (less than 50 of which remain in the wild). The Jungle Cruise takes a boat through a real swamp, where people can enjoy birds, alligators and other reptiles in their natural environment. 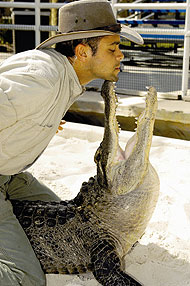 Gatorama, near Palmdale, Florida, offers visitors a chance to see a commercial alligator farm that harvests more than 1,000 alligators annually for meat and leather products. You can purchase these products during your visit too. The park also has a 1,000-foot walkway and bridge that allows glimpses of monkeys, bobcats, raccoons, peacocks, six species of crocodiles, ostriches and tortoises. Visitors can observe alligator feedings and see Goliath, a 14-foot American crocodile.

The "Alligator Capital of the World," Gatorland has been educating and entertaining Orlando-area tourists since 1949. As visitors walk through the giant gaping alligator jaws, they enter a world filled with big gators and crocs; a children's water park; the Gatorland Express Railroad; a petting zoo, where youngsters can feed baby gators; a breeding marsh; nature walk and a choice of four shows.

During the Gator Jumparoo show, large alligators jump 4 to 5 feet out of the water and grab food from a trainer's hand. The Jungle Crocs show has trainers hand feeding four different species of crocodiles. Visitors may also enjoy watching wranglers wrestle 6- to 8-foot alligators in Gatorland's 800-seat stadium.

Adventurous visitors can enroll in the Trainer For A Day program, where anyone 12 and over can shadow real animal trainers during their daily routines. Program participants should expect to get dirty and may even be asked to help move large crocodilians.

The Turtle Hospital, in Marathon, Florida, is the only state-certified veterinary hospital in the world devoted exclusively to sea turtles. Since it opened in 1986, the turtle hospital has treated more than 1,000 turtles and released about 750. The hospital can handle any type of emergency, and its rehabilitation arm consists of a 100,000-gallon saltwater pool and 19 individual tanks ranging in size from 150 to 800 gallons.

Admission includes a 45-minute tour of the hospital and another of the rehabilitation complex. Sea turtles treated include loggerheads, greens, hawksbills and Kemp's ridleys.

Continue south from Marathon to Key West to pay a visit to the Turtle Kraals Museum. It is the world's only sea turtle museum and is located on the site of an old turtle cannery.

That about wraps this tour up – but do us a favor. If you come across any herp-related attractions not included in this article, and you think they might be of interest to the readers of REPTILES magazine, then please send us photos, postcards, a paragraph or two and we'll see if we can get the word out in future issues. Bon voyage!