Four-horned chameleons (Chamaeleo quadricornis) are native to Cameroon, Africa. This coastal country located just north of the equator is bordered by Nigeria, Chad, Central African Republic, Republic of the Congo, Equatorial Guinea and Gabon. Also known as Cameroon bearded chameleons or “quads,” this species of sail-fin chameleon grows to a length of 10 to 14 inches, and most are collected from the Mount Manengouba and Mount Lefo regions. The species loves cool weather, and its native rain forest habitat receives between 100 to 400 inches of rainfall each year.

Temperatures in this region usually remain well below 80 degrees Fahrenheit, making four-horned chameleons very difficult to care for in captivity. It is much easier to adapt a veiled chameleon (C. calyptratus>) to your home than a cool-climate species prone to hyperthermia. Four-horned chameleons prefer a temperature range of 55 to 75 degrees with humidity averaging 50 percent. They tolerate temperatures of 30 to 55 degrees in the winter if the humidity is higher than 50 percent. If constant humidity cannot be provided to these sensitive chameleons, they will eventually dehydrate and die from kidney failure or respiratory disease. 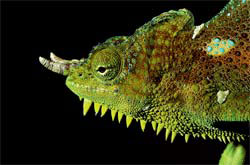 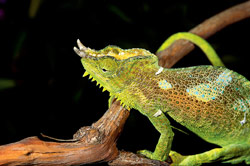 Some hobbyists prefer a more flashy colored chameleon, but I find beauty in a four-horned chameleons' green and yellow hues and varied squamation (scale pattern). Purple, blue and orange are often accent colors along the casque and sides. The beard of elongated scales is attractive and so are the four horns. Four-horned chameleons can sport as few as one horn and as many as six or more in the wild and in captivity. The horns can break off. The high dorsal crest, or sail fin, travels along the back and part of the tail. It is common to species of mainland Africa.

I have seen chameleons in my feral population glide effortlessly across ponds, actually using their bodies in a sailing fashion. They seem to be in midevolution, like a mythical miniature Nessie, and I find that truly amazing.

If you’re buying an imported chameleon, first check for dehydration. The skin should be full and firm, not loose and wrinkled, or hanging. The eyes should be big, round and alert. If possible, make sure your quad can eat to rule out a problem with its tongue. Look inside the mouth for any lesions, mouth rot, a tongue infection or excess saliva. Hold the chameleon up to your ear and listen for wheezing or popping sounds as it breathes. These sounds, coupled with excess saliva and forced breathing, could be signs of respiratory disease.

I recommend all new chameleons, especially imports, have a fecal check done by a chameleon-knowledgeable veterinarian. An animal with a low parasite count can be wormed easily if the problem is caught early.

To check for parasites before making a purchase, examine the chameleon’s sides. A severe parasite infestation often can be seen just under the skin. Moveable lumps that are not wrinkles likely are parasites. These are usually internal parasites that have reproduced so much they have migrated outward. Typically, such chameleons are not a good choice for successful worming.
Most four-horned chameleons available in the pet trade are wild-caught imports. Quads are only being captive bred in small numbers.

Four-horned chameleons are particularly sensitive to intrusions into their environment. I often hear people say they keep their quads together with no adverse effects. That is until they report back on a female mysteriously dying, getting a nasty respiratory infection or refusing to eat. This often occurs with chameleons trapped in stressful situations. Whether you plan to house your chameleon indoors or outdoors, remember C. quadricornis is a shy, reclusive creature.

Housing four-horned chameleons separately is highly recommended. Single adult-sized chameleons should be housed in a full-screen enclosure 3 to 4 feet tall and 2 feet square minimum. I stress minimum size as a base line. Whenever possible, bigger is always appreciated by the captive. Whether you purchase an elaborate, furniture-quality screen enclosure or construct a simple tube cage, try simulating the chameleons’ natural conditions. Cameroon has humid rain forests lush with bushes and trees.

Outdoor enclosures should be in a well-lit area with little or no direct sunlight. Plenty of thick foliage should be available for shelter if the temperature rises above than the recommended level. Hydration becomes more of a problem for keepers in hotter and drier areas. For example, if you live in Seattle, Wash., the chameleon could stay outdoors most of the year, provided temperatures are not too low. Phoenix, Ariz., residents would probably need to keep four-horned chameleons indoors.

This doesn’t mean keepers should never take their chameleons outside. If conditions permit, nothing is healthier for a chameleon than natural sunshine. Even if they are not in direct sunlight, the sun’s rays have beneficial qualities for their immune system. Take extreme care your chameleon doesn’t overheat or wander off. Although slow, they are sneaky and determined.

Everyone loves to watch chameleons eat. It is the most fascinating thing a chameleon does. When the new arrival is scared to eat, upset over the trip to its new location or just plain full, new keepers become paranoid that something is wrong. Usually, dehydration is the problem, or the lizard has not had enough time to acclimate to the new surroundings.

New keepers are often surprised at how long a chameleon can go on a hunger strike. Chameleons can survive days without food. If they are healthy and fully hydrated, they can go weeks without sustenance. Hydration is far more important than food in most situations. A well-hydrated chameleon begins feeding soon after arrival if its needs are properly met.

Imported chameleons may not be familiar with the domesticated crickets available from pet shops. Captive-bred chameleons don’t know the difference. Offering a variety of food items is always recommended. Some animals have never seen a mealworm, or they don’t like them.

Four-horned chameleons love snails and flies. I’ve found they hardly ever turn them down. I can grow my own flies, but some hobbyists can only purchase crickets. Both are fine; just be patient with your new captive. Offer five to six insects of your choice per meal. I feed twice a week at most. I let feeder insects loose in the cage. Dish feeding is also an option, but know there is a higher chance of tongue damage by using one.

Dust feeder insects with your choice of vitamin and mineral supplements per the directions on the package. I use Sticky Tongue Farms Miner-All and Vit-All for my reptiles and amphibians.

Seasonal food strikes may occur, especially if your chameleon is overfed. Portion control is hard when you love this creature and want to ensure it is healthy and happy. However, an obese, lethargic chameleon can’t get around to hunt and to exercise. Chameleons take the opportunity to eat whenever food presents itself, but most animals in the wild spend a great deal of time hunting. Some days no food is available, and they go without. Keeping your four-horn lean and hydrated gives it a better chance at longevity, as it does for us.

Place the female four-horned chameleon in the male’s enclosure. Chameleons purchased as wild-caught adults may have already bred in the wild. A female may display nonreceptive coloration. She may turn dark and rock back and forth. This is OK; the male will mate with her anyway. This ensures there will be enough sperm to fertilize all eggs she lays. Technically, one copulation gives the female enough sperm to have many viable egg clutches. Such sperm retention ensures new life even if a male is not around on a regular basis. If the female does not breed enough, the eggs’ viability drops due to the lack of usable sperm. Approximately three to four weeks after breeding, she will have a noticeable increase in girth.

To palpate a female four-horned chameleon, take her into one hand. Using two fingers, gently press the abdominal wall and underbelly in a soft, circular motion, pressing toward the spine. Small eggs the size of jelly beans can be felt on gravid females. If the female is near egg deposition, the outline of the eggs can be seen as lumps on the outside of her body. Lumpy females are often called “marble bags” because of their appearance. Reintroducing her to the male two weeks after egg laying is usually safe. If the female seems too thin and stressed, wait until she has returned to her previous health before introduction.

Breeding the female four-horned chameleon shortly after egg laying ensures that future clutches have enough sperm to be fertilized. If the female does not store sufficient sperm, future clutches might be totally or partially sterile. Sexually mature females’ mission is to reproduce. Laying two to four clutches per year is the natural plan. Constant laying is a strain on her body, and it shortens her life span compared to the male. Females usually live three to four years in captivity, whereas a male lives five to seven years.

When a gravid female four-horned chameleon is ready to lay eggs, she should have a nesting site available. I provide a plastic tub or a new, clean trash can filled with at least 12 inches of potting soil. A plant, sticks and a clip-on dome light are also provided near or on the egg-laying container. If possible, the egg-laying container should be vertically twice the length of the female’s body. I use damp potting soil moistened until it does not collapse on itself when a hole is dug. Water should not be standing in the bottom of the container. This could drown the eggs.

The female four-horned chameleon may dig many test holes. Let her dig as much as she wants. This may take hours or even days. Be patient. When finished, she looks thinner and stops covering the holes. Two to four times a year a female deposits 10 to 13 eggs per clutch. The eggs should be incubated for five months at 68 to 74 degrees.

Once a female four-horned chameleon has deposited her eggs and covered them, she climbs back onto plants and forgets about the eggs. It is then safe to remove them and set them up for incubation. Carefully dig up the eggs, and place them in a plastic box with a sealable lid.

The container should be half-filled with damp vermiculite, which can be purchased at any garden center. Mix the medium with enough water so when you squeeze it, there are a few small water droplets that dribble off your fist. Too much water drowns the eggs, and not enough dries them out. To check dampness during incubation, pick up a pinch of vermiculite and squeeze it. Only a drop or two of water should come out. Place the eggs in rows half-buried in the vermiculite. Seal the lid, and place the container in an incubator, a closet or other safe and cool place.

Hatchlings can be kept in much the same manner as the adults, though even more care should be taken in maintaining optimal temperature and humidity levels. These little chameleons can dry out very rapidly. Hatchling four-horned chameleons can be kept together for roughly a month, but separate at that point.

In closing, I hope you keep learning as much as you can and breeding as many chameleon species as possible. Chameleons’ natural habitats are disappearing at an alarming rate. There may come a time when experienced hobbyists may have to reintroduce species back into the wild. This is happening with other endangered species already. Responsible and respectful breeding is our global responsibility to ensure future generations in captivity and in the wild.