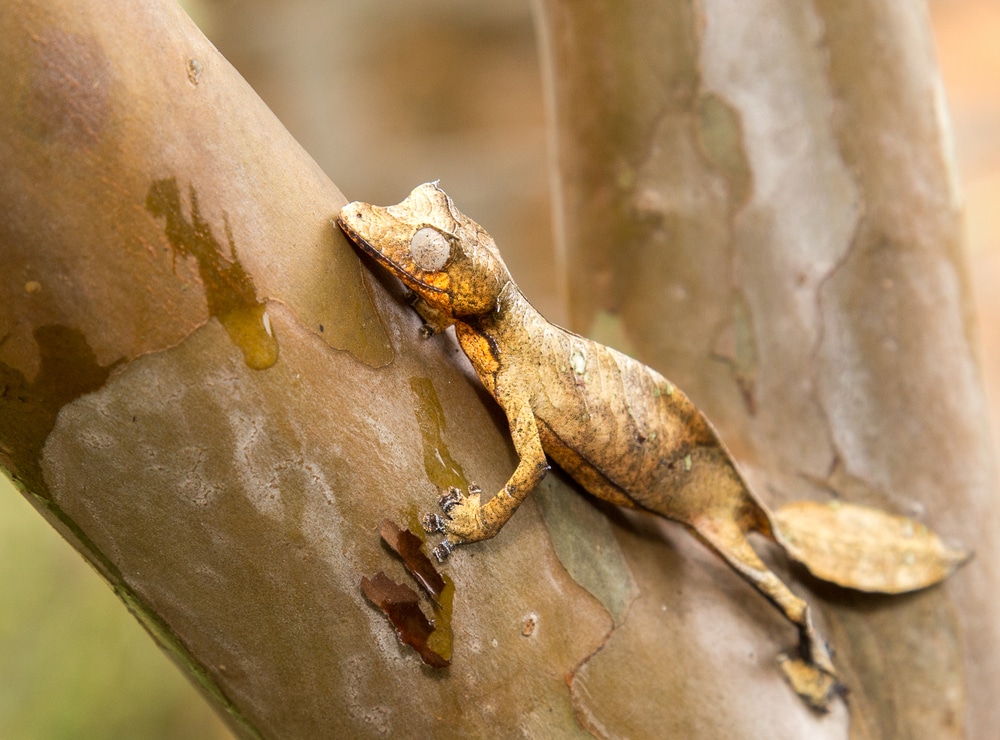 Check out the lined leaf-tailed gecko — if you can spot it.

Build The Perfect Indoor Tegu Enclosure
Is A Tegu Right For You?
Leopard Gecko Genetics Unmasked

The fact that many species of reptiles and amphibians seemingly disappear against natural backgrounds in their environments is well-known. Examples of these animals can be found in natural history books and magazines. Their disguises are so enigmatic that the caption often asks you to find the reptile or amphibian in the picture.
As a former herpetologist at the Fort Worth Zoo, I routinely worked with many reptiles and amphibians. Secretive species were in several exhibits, but leaf-tailed geckos were some of the most challenging to spot. Even though I knew where they typically perched and how many were in the exhibit, I had trouble finding these geckos.

Leaf-tailed geckos of the genus Uroplatus are found throughout the rain forests of Madagascar. These nocturnal geckos spend the day resting on tree trunks and other vegetation until evening when they become active. Over the years, the Fort Worth Zoo herp staff has had considerable husbandry and reproductive success with a variety of leaf-tailed geckos, including the giant leaf-tail (U. fimbriatus), Henkel’s leaf-tail (U. henkeli) and the mossy leaf-tail (U. sikorae). In the fall of 2004 they received a new species: the lined leaf-tailed gecko (U. lineatus).

The first thing that comes to mind when observing lined leaf-tailed geckos is how different they are from other leaf-tails. Overall color and pattern are much more regular than the more common leaf-tails. Body color can be a uniform tan with little patterning or alternating light and dark lines (hence the geckos common name). Legs are long and thin without the fringe of skin that breaks up the outline of other leaf-tailed geckos. Lined leaf-tails have a more elongated and cylindrical body with a tail resembling a dead bamboo leaf. These unique characteristics may be the result of the gecko evolving in a different microhabitat. 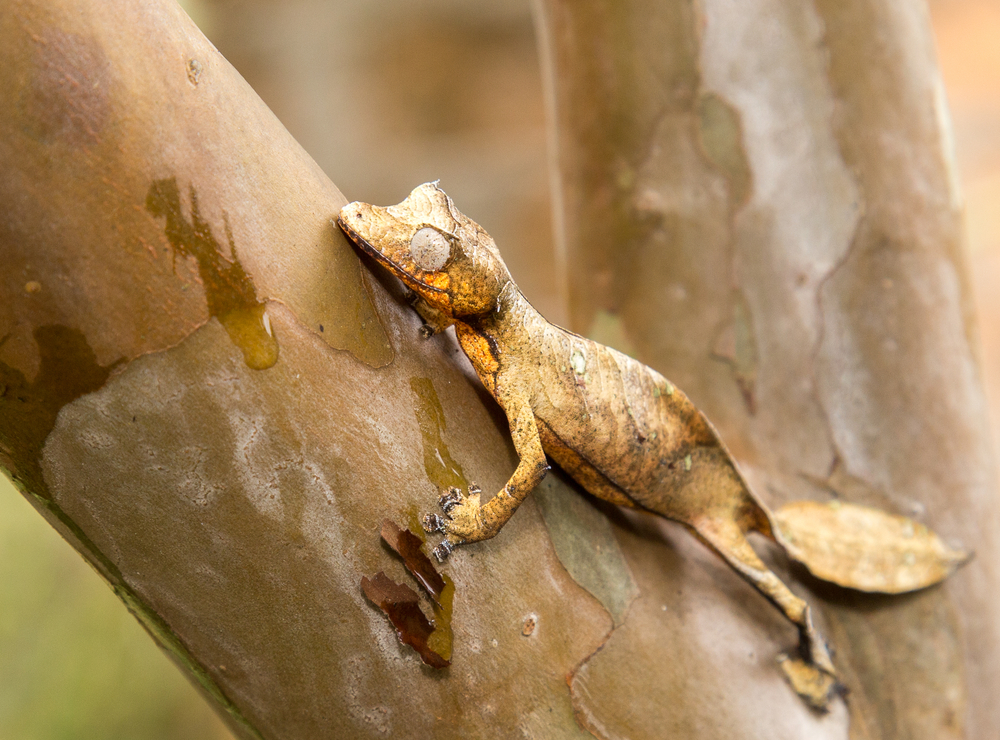 Lined leaf-tails are about 5 inches in snout-to-vent length and 10 inches in total length. They typically live for two or three years, but reproductive females may only live one or two years.

Although most other leaf-tails are typically found on tree trunks with lichens and moss, lined leaf-tails may be confined to bamboo forests (Glaw and Vences, 1994).The gecko’s captive behaviors seem to support this. Often perching on dead bamboo, it is much more conspicuous when resting on other natural surfaces.

Lined leaf-tails also have the limited ability to alter body color and pattern. They can be almost completely tan or tan with a single black stripe behind each eye. The normal tan body color can change to a bright orange or a dark combination of brown and black lines depending on stress and activity. Two patterns seem prevalent; it’s either an overall tan with no pattern or distinct lines that run the length of the body. The tail can also change to a pattern of light and dark bars, which are perpendicular to the lines found on the rest of the body.
The gecko’s ability to change color and pattern may be important for communication between others of the same species, background matching, thermoregulation and as a measure of stress. Signs of stress include atypical coloration for an individual, a curled-up tail, sunken eyes and nose rubs.
Lined leaf-tails are about 5 inches in snout-to-vent length and 10 inches in total length. They typically live for two or three years, but reproductive females may only live one or two years.

The trick to any successful captive-care environment is creating a naturalistic enclosure that provides parameters as close to natural for the animal as possible. At the Fort Worth Zoo, the lined leaf-tail exhibit is in an area with moderate temperatures of 70 degrees Fahrenheit at night to 80 degrees during the day, which is similar to temperatures found in the tropical rain forests of Madagascar. This section of the herpetarium also experiences a slight cooling, varying 5 degrees, during the winter months. Humidity should be kept above 70 percent at all times but with decent ventilation. 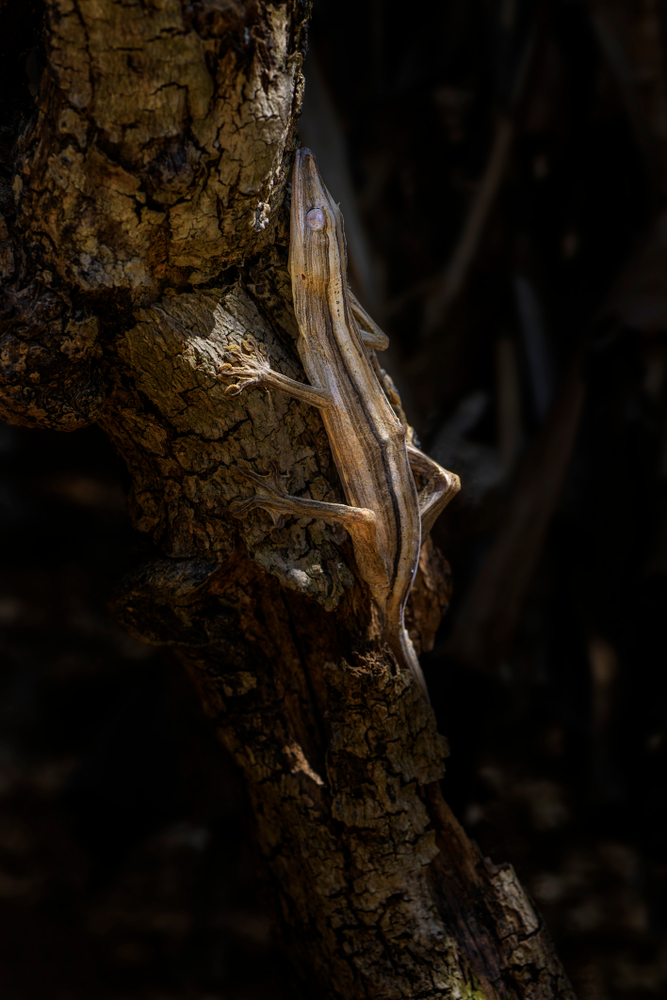 Although most other leaf-tails are typically found on tree trunks with lichens and moss, lined leaf-tails may be confined to bamboo forests.

Leaf-tailed geckos are from rain forests, and much like chameleons they prefer to drink from water as it passes over their bodies and the surrounding vegetation. Allowing animals to dehydrate is the most common mistake made by keepers just starting out with leaf-tails. To avoid this potential problem, the exhibit was constructed with a small waterfall running continuously, and a manually controlled misting system was installed. Misting happens at least once a day and preferably twice (once in the morning and once in the evening).
The exhibit contains bamboo and wood for climbing, and the substrate consists of pea gravel for water drainage covered by a few inches of dead bamboo leaves and some sphagnum moss.

Obviously, few people will design exhibits, but people interested in keeping leaf-tails at home can adapt the environmental ideas described above to a 20-gallon tall tank. This setup can hold a pair of leaf-tailed geckos, but the larger the enclosure, the better.

Lighting is important for aesthetics and plants in the enclosure. Leaf-tails will be fine with a single fluorescent bulb giving the proper light cycle from the top of the enclosure. Keep bulbs on timers so there’s light for 10 hours in the winter and 12 hours in the summer.
I recommend using fluorescent UVB bulbs. Avoid using spotlights unless the enclosure is several feet tall and you can provide a basking area in the low 80s while not affecting the enclosure’s ambient temperature. Fluorescent bulbs also provide a slight thermogradient in smaller enclosures.
When the Fort Worth Zoo’s exhibit was completed, two female and two male lined leaf-tailed geckos were introduced into the new enclosure. There was no apparent stress between the lizards, and males occasionally shared the same perch. Male geckos seldom tolerate each other, but lined leaf-tails are one of the exceptions.

Lined leaf-tailed geckos undoubtedly feed on small invertebrates in their native range, but exactly which species are not known (at least to me). In captivity adults are fed two to three adult crickets twice a week. Every other week the crickets should be dusted with a multivitamin. If you use UVB bulbs, this multivitamin doesn’t need to contain vitamin D because the geckos will make their own. Adults can also be given chopped papaya, but only juveniles seem to eat offered fruit. Cockroaches are also recommended.
Feed juveniles three to four appropriately sized crickets three times a week as well as fruit one day a week. Juveniles should also receive a multivitamin once a week for the first six months. Remember to always remove uneaten crickets or at least leave cricket food in the enclosure. You don’t want leftover crickets to pester your gecko.

One of the first things leaf-tailed gecko owners should know is that the gecko’s tail acts like a hydration gauge. Normally it is flat and full. If your gecko is dehydrated, then the tail will appear thinner in width and somewhat curled. This is an easy way to assess the hydration of the geckos. It causes minimal stress and should be done daily.
Similar to chameleons, the fullness of the gecko’s eyes also tells you a lot. Sunken eyes indicate the gecko is in peril, and immediate action must be taken.
Toe pads can also be a problem for new geckokeepers. Leaf-tails live in areas of extremely high humidity, which is hard to recreate in captivity. When the geckos shed, they often retain small pieces of skin on their toes. Over time the old skin builds up, and the gecko can’t grip with that toe anymore. It may even lose the toe if it’s not cared for. Mist the troubled gecko for several minutes. If the skin is not wet, you can easily damage the toe. Then very carefully peel the skin off the toes. If the skin does not come off easily after misting, take the gecko to a veterinarian.

Although it is often overlooked in nocturnal reptiles, Rick Hudson and his colleagues at the zoo discovered that UVB light is essential to achieving reproductive success with these geckos. Full-term dead babies are a herpkeeping nightmare, and this was consistently occurring with the original groups of leaf-tails. After considering which husbandry changes might improve hatching success, the adult geckos were exposed to UVB via black lights. The hatching success skyrocketed after the addition of UVB. The theory is that the exposure to UVB enabled the geckos to provide their eggs with more calcium, which in turn produced healthier babies. Exposure to wavelengths around 295 nanometers can increase calcium levels in the blood of most vertebrates, including yourself.

The first eggs were found at the base of a plant just under the leaf litter in mid-January. A total of four eggs (two from each female) were set up in gallon jars using a vermiculite medium (2-1 vermiculite to water ratio). The jars were placed in a reserve area that typically reaches a daytime high of 80 degrees Fahrenheit and a nighttime low of 70 degrees. In mid-April, two hatchlings were found resting on the walls of the gallon jar. The hatchlings were enormous! The diameter of each egg had been roughly one-half inch, and the hatchlings had a total length of 31⁄2 inches — more than five times the diameter of the egg! These two hatchlings weighed in at a slim 2 grams each. Over the next few months the zoo produced 10 lined leaf-tails, all of which are growing fast. Producing a second generation from these offspring will be the zoo’s next challenge.

The enormous hatchlings began feeding on a regular basis after about two weeks. Nectar, apricot baby food and calcium carbonate were offered to new hatchlings to help them get a jump-start. Hatchlings resemble adults, but they have a single bright-white stripe behind each eye, which occasionally changes to a wider black stripe in the adults.
Hatchlings are more prone to desiccation than adults, so the zoo set them up on damp sphagnum moss with plastic covering 90 percent of the lid. Additionally, the rearing enclosures consist of a plant, water bowl, and several sticks or bamboo for perching. Perches should have a diameter approximately one to two times the width of the gecko’s body and a length at least twice the body length.

Care must be taken when handling these geckos because hatchlings can drop their tails quite easily, but they grow back quickly. All of the zoo’s hatchlings preferred to rest on the glass of the aquarium during the day, possibly to conserve moisture. The hatchlings were misted twice a day and fed three times a week.
Although very slender, hatchlings and adults have large heads and are able to feed on surprisingly large prey. Their feeding strategy is similar to other leaf-tails; imagine a cat stalking a mouse and then pouncing with great speed on the unsuspecting prey. With this “dive-bomb” approach to feeding, it is important to have a substrate that doesn’t cause facial abrasions. Sphagnum moss is a good choice. Although I offer a wide variety of food, the lined leaf-tails seem to prefer crickets, which make up the staple of their diet.

Lined leaf-tailed geckos are an unusual species of Uroplatus. Their coloration, body shape and microhabitat separate these leaf-tails from the more common species found in captivity. Uniqueness is a trait that most herpkeepers enjoy — think of all the ball python and leopard gecko morphs — and it’s the reason I feel the lined leaf-tailed gecko is in a class of its own. I highly recommend this beautiful species and hope to see captive offspring offered more consistently in the future.