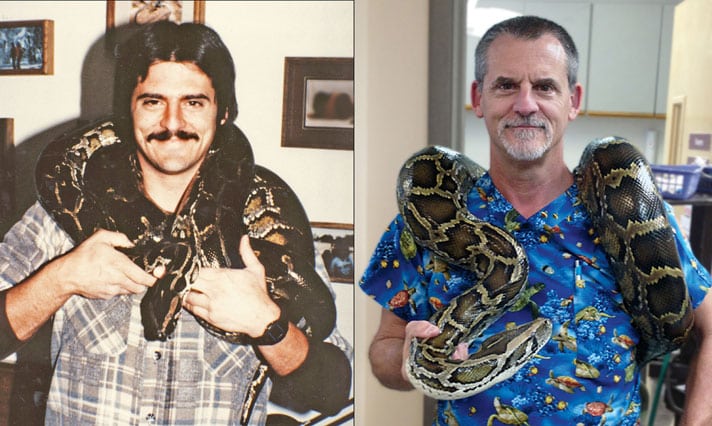 The right side of my reptile's mouth, under the chin, has become swollen. His mouth is seeping pus that is slightly pink. What is it?
Lizard Seizures And Spinal Bumps
Sungazer Lizard With Metabolic Bone Disease 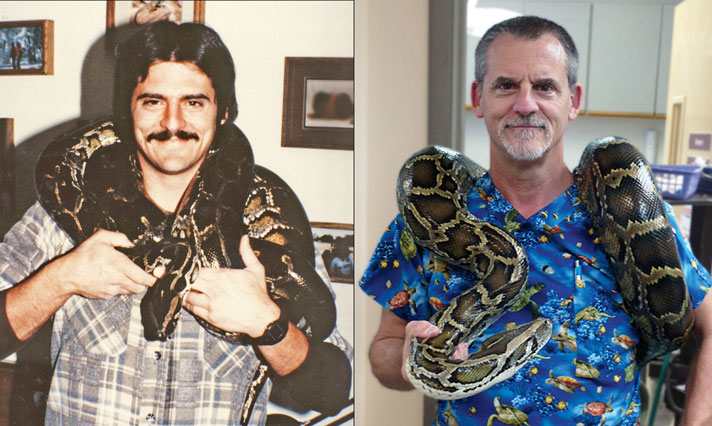 Where did the time go? Pictured on the left is Dr. Mader with Bux, his first pet Burmese python, and 30 years later, not much has changed.

I took about a nanosecond to think about it — of course! I had been freelance writing for several other magazines, but the opportunity to get on board a new herp magazine on the ground floor was exciting, and I just couldn’t pass it up.

I was only out of veterinary school a little over seven years, but my veterinary practice was almost 100-percent exotics, with the majority of the patients being reptiles. I want to send a shout out to the Southern California Herpetological Society and the California Turtle and Tortoise Club, both organizations with which I did extensive work. Not only did they refer me thousands of patients over the years, but I was also active in their clubs, frequently lecturing and participating in their events. I am sure that I would not have the extensive experience that I have today if it were not for their trust and support.

Back when my “Veterinarian Q&A” column started in REPTILES, of course, all the questions were submitted in longhand, the old-fashioned way, via the U.S. Post Office. I always felt badly for many of the readers, because by the time their letters arrived at the magazine’s editorial offices, were vetted by the editors, and then forwarded to me (I would receive one large envelope a month containing dozens of hand-written or typed letters), up to eight weeks may have passed since the letter was actually written. I suspect that many of the sick animals in question were long since deceased by the time I got back to some of the letter writers.

But I did get back to them. I tried my best to answer every letter that was sent to me.

During this past 23 years, I have answered over 350 questions in over 250 columns, have penned numerous REPTILES articles, as well as multiple Reptiles USA features (Reptiles USA, no longer being published, was the annual sister publication of REPTILES).  I have published hundreds of photographs, including many outstanding images borrowed from my great colleagues, Steve Barten and Rich Funk, both top-shelf herp vets themselves.

During this journey, I have received hundreds and hundreds of letters. Most of them featured straightforward, no-nonsense, herp-health-related questions. Other letter writers just wanted to send me photos of their herp pets (I loved that!).  Some wrote nasty letters about their herp vets (I never published any of those), and some wrote nasty letters about me (REPTILES did publish a few of those).

Due to things I wrote, I have been threatened with a lawsuit once, and actually sued another time. The former came about after I wrote about treating a snake for mites by wiping the affected animal with a cloth soaked in olive oil. The oil coats the mites, suffocating them, and rids the snake of the ectoparasites.  It is safe and non-toxic, but, of course, that only holds true if you actually wipe the olive oil on the snake using the cloth, and not dump an entire bottle of olive oil into a bowl, covering the entire snake and essentially drowning the patient!

The lawsuit came about when a letter writer sued me and the magazine, claiming I used a picture of their pet in my column without permission. This case actually went to court, but was eventually thrown out because the animal in the photo was not the person’s pet, even though it looked like it. Even if it had been the person’s pet, the judge ruled that it would not have mattered, because reptiles do not have a right to their own image unless they are a public figure. Ugh!

As letters gave way to faxes, and faxes gave way to emails (sometimes with multiple image attachments), I always loved the challenge that came with each inquiry. It was a personal goal to make sure that I researched all the issues regarding a topic, so that I would be able to provide the most up-to-date medical information. I can promise that everything I put in my columns can be backed up by scientific literature.

I had to be careful to walk the line between merely giving advice and making an actual medical diagnosis — which is illegal to do in many states — without physically seeing the patient in question.  Hence, my standard line, “I can’t tell you for sure without actually seeing your pet reptile, but what you are describing sounds like …”  And then always finishing with, “You need to take your pet to your local herp vet.” A lot of readers thought this approach was a cop out.

Over all the years and all the columns, my picture has only appeared in the magazine a few times. As a result, most people have no idea what I look like. The resulting anonymity was great, too, as I could walk into any herp show, even the big ones like Daytona, and nobody knew who I was. I was able to mingle, meet people, and hear all about their veterinarians — including what people really thought about me!

When I began writing my column, I had three pet turtles: Traci, Stella and Dewe. Sadly, I lost Dewe to cancer after 27 years, and I dedicated one of my columns to him. I am a huge believer in the human-pet bond, and I do believe that one can establish a bond with herps just as with any furred or feathered creature.

Russ Case, the editor of REPTILES, was the managing editor at the beginning of my tenure with the magazine, and his bearded dragons were patients of mine when I lived in Los Angeles. I have the greatest respect for his professionalism and talents.  Thank you, Russ, it has been an honor working with you over the years, as well as with all the various staff you have employed. I developed great friendships with all of them. (The honor has been ours, Doug! —Russ)

I have always been an advocate for the Association of Reptilian and Amphibian Veterinarians, and in closing, would like to again state that if you have a herp and need a good, trained veterinarian, enlist one that is a member of the ARAV.  The “Need a Herp Vet” box on the opposite page will help you to do so.

I am not leaving the profession; it is just time to tackle some new challenges. I’ll still be around and active in the herp world. Perhaps you’ll see me at a conference or show — but you probably won’t recognize me.

It has been a fantastic ride.