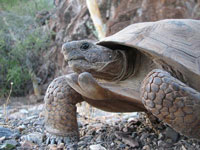 DNA analysis reveals existence of a new species after 150 years

A team of researchers investigated a desert tortoise from the southwest of the USA and northwestern Mexico. What was thought to be a simple problem in species identification ultimately turned out to be a very complex matter. In the end, this investigation would require forensic genetics and other techniques to be employed. 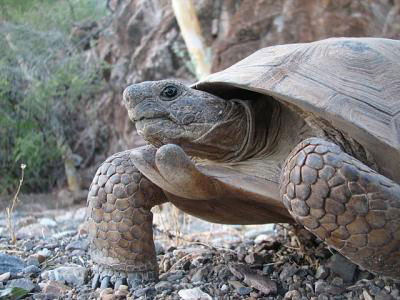 This is a specimen of the new species, Morafka's desert tortoise (Gopherus morafkai), from Tiburon Island, Sonora, Mexico.

The resulting research has now ultimately led to the description of a new species. More than this, however, the discovery has very important implications for conservation and the development of the deserts of southern California.

Confusion from the start
Since the original description of Agassiz's land tortoise, scientifically recognized as Gopherus agassizii was published, confusion surrounding these tortoises has increased. It was 150 years ago, in 1861, that James Graham Cooper described this new species of tortoise from the deserts of California.

Yet right from the start, there was confusion. The publication date has been consistently and inappropriately attributed to 1863. Even the original common name of Agassiz's land tortoise was inexplicably changed to that of the desert tortoise, which is a moniker that is still commonly used today. But now there's more than just a new name.

Throughout this time, Agassiz's land tortoise has been masking the existence of at least two species whose distributions are restricted to either side of the Colorado River. Professor Bob Murphy of the Royal Ontario Museum, Toronto, Canada and the Kunming Institute of Geology, Chinese Academy of Sciences, along with colleagues from the US Geological Survey, Arizona Research Laboratories, the California Academy of Sciences and Lincoln University have now started to unravel the puzzle.

As if coming straight out of an episode of the TV series CSI, they went into the laboratory and obtained DNA data from the original 150-year-old type specimen, as well as from a more recently described species inhabiting the tip of the Baja California peninsula. This use of forensic genetics revealed that the named species was from California, and not Arizona as is sometimes claimed.

Clarification and a new classification
The enigmatic species from Baja California was previously thought to be a transplant from Tiburon Island, Sonora, Mexico, but turns out to be from California, or at least its founding mother was from there. All of this meant that the population in Arizona and adjacent Mexico was an unnamed, new species-one whose identity had been hidden for more than a century.

The new rock-dwelling species, Gopherus morafkai, has been named after the late Prof. David J. Morafka, a pioneer in tortoise research. The recognition of Morafka's desert tortoise means that Agassiz's desert tortoise has suddenly lost a whopping 70 percent of its range! Arizona and adjacent Mexico can no longer serve as a genetic reservoir for the western species.

And given that this species was already listed as being threatened because of a drastic decline in the number of individuals-a consequence of disease, urban expansion and habitat destruction-so the description of the new species may turn up the heat on politicians and developers with respect to the massive construction of solar energy sites in prime desert tortoise habitat in the Mojave Desert. Perhaps this flagship centurion of the southwest should be upgraded to Endangered status? Since Morafka's desert tortoise has lost 30 percent of its range, perhaps protection for this species should be fast-tracked? Only time will tell.

The complete story still remains untold. It is possible that Morafka's desert tortoise may itself consist of two species. And so, back to the field and lab goes the team, inspired by knowing that Dave Morafka would be very pleased with their progress!