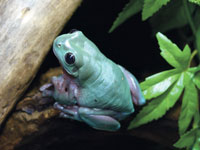 Litoria caerulea frogs sit out at night to collect moisture.

Researchers at Australia's Charles Darwin University have determined that during the dry season in Australia, Australian green tree frogs (Litoria caerulea), or White's tree frogs, sit out at night to hydrate, absorbing moisture during periods of minimal rain. The paper "Condensation onto the Skin as a Means for Water Gain by Tree Frogs in Tropical Australia," is published in the October 2011 issue of the The American Naturalist. 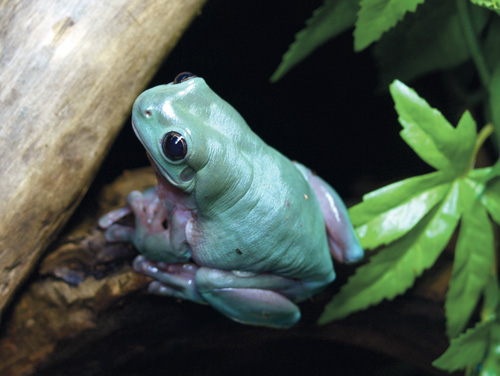 The scientists, led by Dr. Chris Tracy, previously observed tree frogs on tree limbs and other outside areas during times of extreme cold temperatures, and suspected the animals were absorbing moisture but never tested their hypothesis until now. The  researchers used real frog dens as well as man made PVC pipe based dens to see if the amphibians could collect enough moisture to to counteract what they lost being out in the cold. What they found was the frogs would lose approxmately .07 grams of water from the cold, but would gain .4 grams when they returned to their dens. Also tested was the ability of the frogs to absorb the water, in which they found that 60 percent of each water drop collected by the frogs were absorbed through the skin. "When there's no water available, even a small amount can mean the difference between surviving the dry season or not," Tracy said.

The original paper can be found here