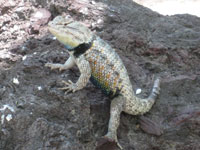 I’m jealous. Two of my co-workers had some chance herp encounters recently, and the species they saw were pretty cool. The most I saw was a p

I’m jealous. Two of my co-workers had some chance herp encounters recently, and the species they saw were pretty cool. The most I saw was a peripheral glimpse of a skittering lizard out of the corner of my eye during a camping trip I took this past weekend. A group of my poker buddies and I headed to the mountains to play cards in nature for a change, and in between games we got some hiking, eating, drinking and cigar smoking in. The lizard glimpse was during a hike to San Antonio Falls on Mount Baldy. I didn’t get a good look at the lizard, but did get a good look at a nice waterfall, as well as a couple of llamas that we came upon, out for a walk down the mountainside with their owners. Llamas always appear to be very leery of me, but I still like them.

The first co-worker who had a chance herp encounter was my own supervisor, Melissa Kauffman, who is one of the editorial directors here at BowTie Inc. Melissa visited Las Vegas with her husband, Scott, who, it so happens, is one of my poker buddies, and while there they decided to check out the Ethel M. Chocolate Factory and Botanical Cactus Garden. A chocolate factory and a cactus garden….now there’s an odd combo. Wandering the grounds of the botanical garden portion of the facility, Melissa came upon a lizard and snapped its photo. She asked me to identify it, a common request from fellow editors who have had a chance reptile encounter (including Helmut, who I’ve written about a few times in blogs, including, most notably, this one). I was expecting to see a photo of a western fence lizard or alligator lizard. The photo Melissa took accompanies this blog. Can you identify the species? The winner gets a free chocolate-covered barrel cactus (this, of course, is humor, and I don’t want anyone sending me grumpy letters demanding their spiky treat).

The other person who saw a wild reptile recently was a member of my staff, Scott Rousseau, the managing editor for our motorcycle publication, Motorcycle Consumer News. Scott was out test-riding motorcycles with some other riders, and had pulled off the road in Casper’s Park, a nice wilderness area in the hills not too far from our editorial offices. I used to hike there on occasion and one of my favorite hikes was the one during which I came upon a bunch of baby horned lizards that had apparently just hatched out nearby. It was also a good place to find tarantulas, at least back when I used to hike there years ago.

Scott said he and the other guys were taking a rest when a snake, present but not immediately detectable, was suddenly noticed. It seemed undisturbed by their presence, he said. I told him it was probably hoping it was appearing to invisible to him and his friends, and reluctant to crawl away and blow its cover.

Another co-worker had another reptile encounter recently, but of the unfortunate variety (for the reptile). He was in the Sierras horseback riding with some friends. When they stopped to pitch camp one afternoon, a rattlesnake was discovered in some nearby grass and leaves. I suspect it was a western diamondback. One of the riders pinned the snake’s head down with a stick, and another one killed it! I heard him telling his story to his staff, so naturally I had to stop and berate him for killing the snake (though I don’t remember whether or not he was the one who actually killed it). I told him a long branch could have been used to move the rattler a safe distance from their campsite and released (I would say this to savvy outdoor people, which these guys were; I’m not so sure I’d recommend this to novices, because if they didn’t know what they were doing a bite might result). He said one of his friends wanted to kill it so he could use its skin to make a hat band. Sigh. Too bad the snake was in the wrong place at the wrong time.

With warmer weather and longer daylight hours it’s the time of year for chance herp encounters. In past years co-workers have come upon sulcata tortoises, whiptails (judging by a description that mentioned a blue tail), Helmut the red-ear, and other species. So far there have been two in the past couple weeks. It will be interesting to see what the rest of the year brings.