If you intend to breed carpet chameleons (Furcifer [Chamaeleo] lateralis ssp.), please purchase only unrelated animals. Some species are represented by very small gene pools, and extra effort must be made to keep these animals genetically divergent and pure to avoid genetic depression and hybridization. Captive-bred or wild-caught Furcifer lateralis subspecies mature and breed at the early age of 8 to 12 months, and they are subsequently gravid for the rest of their reproductive lives. 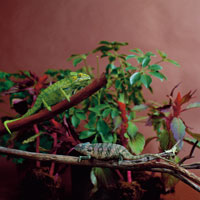 Breeding only the strongest and healthiest chameleons adds to the future strength of the gene pool. All subspecies of F. lateralis are avid breeders. In my experience, once sexual maturity is reached, female carpet chameleons have produced a clutch every six to eight weeks. Maturity can occur as early as 2 or 3 months of age. Once bred, females lay between five and 20 eggs depending on the subspecies. Generally larger subspecies produce more eggs than the smaller ones. Eggs hatch in as few as five to seven months. They can produce upwards of 200 eggs in a lifetime.

The challenge of keeping and finally breeding carpet chameleons under captive conditions is both fascinating and worthwhile. Sperm retention is common in all chameleons. It is possible that if a female breeds once, she can have fertile eggs clutch after clutch. Technically, a female chameleon can breed for one season and still produce viable eggs for her entire life.

Normally in this case the fertility diminishes per clutch, allowing for more infertile eggs as sperm is used and not replenished. In prolific species it is advisable to breed the females shortly after she lays eggs to make sure there are enough sperm to fertilize subsequent clutches.

Allow the female carpet chameleon to rest at least a week or two after egg deposition, and then reintroduce the female to the male in his enclosure. The female retains the active sperm and automatically fertilizes more than one clutch of eggs, so it is possible to have an impregnated female lay several clutches of fertile eggs without being exposed to a male for many months.

Unfortunately, females of all chameleon species, especially short-lived ones such as Furcifer lateralis, can breed with a potentially infertile male and not show signs of infertility until they have expired, and the eggs all turn up useless. I recommend all chameleon females breed with several males per season to ensure proper fertilization.

A gravid female chameleon that does not like to be in the proximity of an amorous male usually exhibits unreceptive coloration, which is different from her normal resting colors. This beautiful display of color announces to the male that female does not want anything to do with him. Yet some males will try to mount anyway, so to prevent unnecessary stress, it is advisable to remove a gravid female after mating has taken place.

Reintroduce females to a male’s cage for a few hours per day for a week. I allow one male to breed a female for 24 hours and then switch her to another male’s cage until she shows gravid colors (a black body with vibrant yellow, green, red, orange and blue spots, and white stripes) or unreceptive behavior (open-mouth hissing, rocking back and forth on the branch, or even running away). My personal preference is to have at least two males and two females in any breeding project, and I rotate the females with the males. Chameleons are not monogamous creatures, and in my breeding projects they have produced more viable clutches with multiple partners per breeding season. This is what might happen in the wild. In a single breeding season, a female wanders from tree to tree, and multiple males might breed with her.

If breeding was successful, the female carpet chameleon shows gravid coloration. A gravid female displays this coloration, hisses and possibly bites males even if she is carrying infertile eggs. After she lays eggs and has time to fatten up, reintroducing her to a male may still elicit a gravid, unreceptive coloration.

The time period for actual mating can vary from a few minutes to more than an hour. The carpet chameleons should not be disturbed during this time. After mating has taken place, the pair pulls apart, and the female usually tries to escape the vicinity of the male. Remove the female, place her in her enclosure, offer food and water, and let her relax. If the female doesn’t show signs of being gravid, try mating her again.

Sometimes breeding chameleons does not go as planned, and the animals take their sweet time. The male may be disinterested in this particular female. Therefore, a backup male is always a good idea. Sometimes a break between breeding attempts gets a lazy male interested. Make sure the animals can’t see each other from their cages. Absence makes the heart grow fonder in a lot of males, especially young, inexperienced ones.

It is important to give a gravid female carpet chameleon high-quality food and supplementation during the initial period shortly after breeding has taken place. She most likely will go off food after her body becomes so engorged with eggs that she no longer has room.

When a gravid female carpet chameleon is ready to lay eggs, a nesting site should be available. I provide a plastic container measuring 1.5 feet long, 1.5 feet wide and 1 foot tall placed in the bottom of the female’s enclosure. I position it next to her plant with a stick leading into the nesting site.

If the female carpet chameleon, possibly pacing for a few days with no signs of digging, doesn’t show interest in this setup, I place her in a new garbage bin measuring 1 or 2 feet in diameter and 3 feet tall with 1 foot of potting soil at the bottom. I place a small Ficus benjamina tree inside with a stick from the tree to the dirt. Make sure soil is twice as deep as the length of the female’s body. I use damp potting soil wet enough so it doesn’t collapse when a hole is dug. Don’t allow water to pool at the bottom of the container. This could drown the eggs. Provide a nontoxic plant, sticks and a dome clamp lamp. I believe the seclusion relieves stress and allows the female to relax for egg deposition. I have had great success with this isolation method when a female is not laying in her enclosure. Her attention can then be focused only on the task at hand.

A female carpet chameleon may dig several test holes. This may take days or hours to accomplish. Leave her alone, and let her dig. Do not remove her until she is finished covering her holes or returns to her branch for a length of time. She may return to the test holes repeatedly and cover only a few them. Be patient. 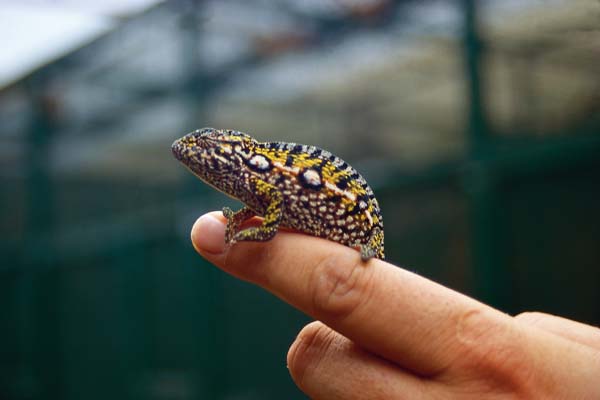 Carefully dig up the chameleon eggs, and place them in a plastic container with a sealed lid for incubation. I use a Tupperware cupcake container without holes. The container should be filled halfway with damp vermiculite purchased at a garden center. Mix in enough water so when it’s squeezed, a few droplets dribble off. Too much water drowns the eggs. Place eggs in rows 1 inch apart and half-buried in vermiculite.

Place the container in an incubator or a closet where the temperature is an average of 68 to 72 degrees Fahrenheit. Keep humidity at 70 percent. Check the temperature and moisture once a week to make sure the vermiculite stays at the original consistency with only a few drops of water dribbling off when squeezed.

Look for chameleon eggs to start swelling and sweating after four to five months. Eggs hatch between five to seven months on average.

Hatchling carpet chameleons can be kept in much the same way as the adults, but even more care should be taken to make sure the temperature and humidity are precise. Hatchlings are very strong and usually eat voraciously in a day or two. Furcifer lateralis subspecies grow so quickly that it is imperative that supplements contain a high-quality form of calcium to ensure proper growth of bones and muscles.

As long as no aggressive behavior is present, a clutch of 10 to 15 hatchling carpet chameleons can be housed together in a screen cage measuring 1 foot long, 1 foot wide and 2 feet tall for no more than a month. After that time, keep no more than five hatchlings per cage. Furcifer lateralis subspecies grow quickly, and adults require their own cage after they reach 3 months old.

Even though F. lateralis is a short-lived species, these chameleons are still a rewarding breeding project for beginners and advanced keepers, and they’re well worth the effort.