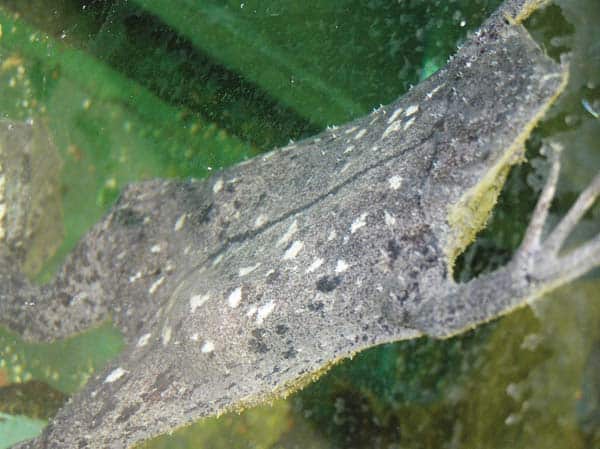 Caring For The Surinam Underwater Toad

Pipa pipa is one of the strangest looking amphibians.

When it comes to really strange and unusual creatures, the Surinam underwater toad (Pipa pipa) has to be right up there with duck-billed platypuses, bowerbirds and cuckoo spawning African catfish. Over the past 30 years or so, I have had Surinam underwater toads (SUT’s) many times. The first pet store I owned was on the very-busy Massachusetts Avenue in Cambridge, Mass. In the front window, I had a 55-gallon tank with two SUTs.

One day, a lovely lady came into the store and said, “Those things are alive!” My response to her was that of course they were alive. She said that she had been walking by my store for many weeks, and every time she passed the store, the two animals were in different places in the tank, but she never saw them move. Then, the past night, she had paused to watch them and one had frog-kicked up to the water surface, taken a gulp of air, returned to the bottom of the tank and froze. She said that she always thought that they were a joke and that they were injection-molded playthings for Halloween. That is how strange this animal looks.

The SUT is in the family Pipidae. The best shot I can give at the frog versus toad question is that all toads are frogs but not all frogs are toads, and the “toadness” for the SUT comes about because, among other things, they do not have a tongue and their rear feet are completely webbed. However, they are also completely aquatic, which is a frog rather than a toad trait.

For our purposes here, we will continue to call them toads because that is how they are known and sold in the hobby. While there are seven other species in the Pipa genus, the only other one I have ever seen or kept myself is P. parva, which is a miniature version of P. pipa. In the hobby, P. pipa is the only one you will normally see, and they are becoming rare. The SUT comes from the Amazon River basin and tributaries in South America; the last shipment I got came from Guyana. 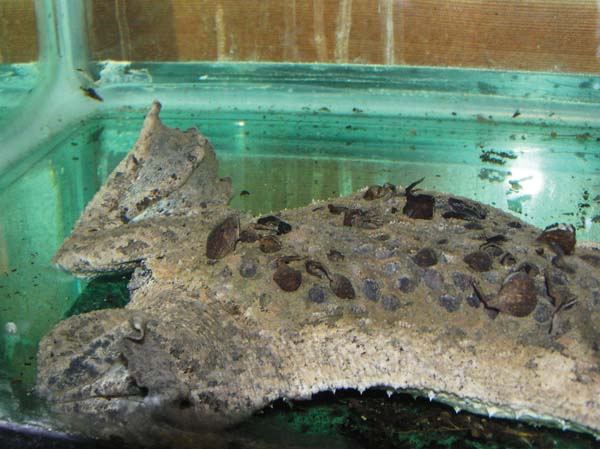 The skin on the mother’s back grows to surround the eggs, and the babies undergo all of their maturation in the safety of little cells within the flesh of their mother’s back.

The SUT looks like someone flattened out a leaf and then pumped it up a bit; they really do look like they were injection molded and that the finished product wasn’t cleaned up at all. The body of a full-grown adult is around 5 inches from nose to tail, and the extended front and back legs can make the whole animal almost a foot long. The color is basically a mottled brownish gray, with all sorts of little knobs and other projections on it. Some of these are, in fact, a lateral line used for sensing the environment, as on fish. 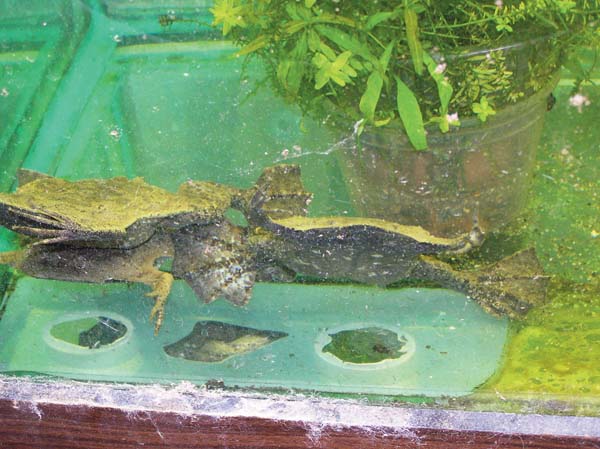 The mouth ends in a bit of flesh, and on each side there are little flaps of skin. These are used like the lure of an anglerfish, to attract prey.

The mouth is across the entire front of the animal, and the eyes are two tiny pinhead-sized protuberances on the forehead. The mouth ends in a bit of flesh, and on each side there are little flaps of skin. These are used like the lure of an anglerfish, to attract prey; many times I have watched hapless goldfish start to pick on this little piece of flesh, only to find themselves dinner. The rear legs are very muscular and end in heavily webbed feet. The front legs are thin and round, and they end in four “fingers,” each one of which branches again into four more “fingers.”

The only real drawback to SUTs is that they really don’t do much. Almost all of the time, especially if they are not hungry, they pretty much just sit there. About once every 20 or 30 minutes, they go to the surface for air, usually exhaling a few bubbles of the old air on their way up, and then crash down to the bottom of the tank, thrashing around a bit, and becoming motionless. When they are hungry, they actually will do some foraging, but this is limited to an occasional kick of the rear legs and an exploration of what might be in front of them. 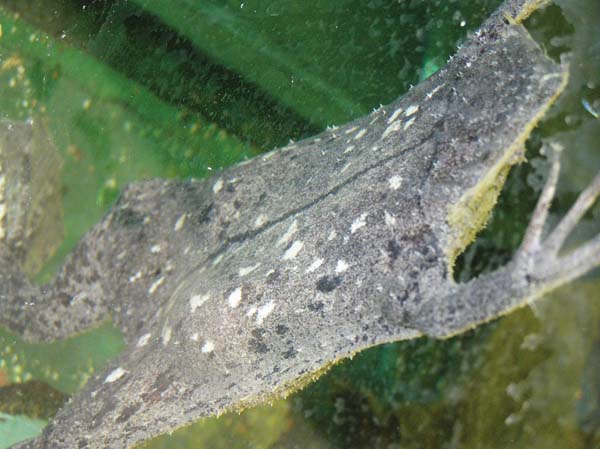 The only real drawback to SUTs is that they really don’t do much.

SUTs are fairly undemanding to keep. My current pair are in a 29-gallon tank, and I also have 10 of them in a 110-gallon tank, which is a very tall tank. I have never tried them with any kind of substrate, but I have always kept a few pots of plants with them. Sometimes they will dive into the plants and stay there until their next breath, but they do not tear the plants up at all. My water is very soft and acid, and by keeping gypsum and pieces of coral rock in the tanks, I manage to maintain around a neutral pH and moderate hardness. I keep the tank temperature in the mid 70s, but it gets warmer in the summer and the SUTs have been just fine. They are from South America, but the waters they live in probably do not get much above the high 80s. I have only had one instance of a SUT jumping out of the tank, and fortunately I was right in front of the tank when the toad went airborne. Ever since then, I have always kept their tanks covered. I use outside canister filters on my toad tanks, and maintaining excellent water quality is required to maintain health for these, or any other, aquatic animal.

Feeding SUTs has never been a problem. They will eat anything. They are, however, the original ambush predator in that they simply lie there, and when something, like a fish, comes near their mouth, they literally explode, mouth gaping open and front hands pushing toward the mouth. I feed my SUTs earthworms and feeder goldfish. Given that I am in the wholesale tropical fish business, I am fortunate to be able to buy boxes of feeder comets and keep them in big tubs. I feed them well, and keep them in good water conditions. Make no mistake about it — SUTs are lightning fast when it comes to swallowing goldfish or worms. The only animal I can compare them to is the marine anglerfish, and both move so fast that it is impossible to really see what they do.

SUTs do best without any other tankmates, as eventually they will make a meal of anything in the tank with them. Recently, I was at a retail store that I had sold two SUTs to, and we were showing them to the manager. One had a huge belly, and the tank had 5-inch koi in it. Yes – the SUT had eaten one of the 5-inch koi. In the 110-gallon tank that I have 10 SUTs in, there are two Boesmani rainbows, simply because I couldn’t catch them when I was preparing the tank for the SUTs. So far the rainbows are still there, primarily because they are fast swimmers and they stay at the top of the water. I will not be surprised if they are gone one day.

One of the most interesting aspects of SUTs is their method of reproduction. They mate in amplexus, as do other frogs, and the male “plants” the fertilized eggs on the female’s back, where they stick to a thickened layer of skin. The skin on the mother’s back grows to surround the eggs, and the babies undergo all of their maturation in the safety of little cells within the flesh of their mother’s back. While I have not yet been fortunate enough to have SUTs pair off and reproduce from the beginning in my tanks, the literature seems to agree that they require tall tanks to execute their “amplexus rise” (with seahorses it is called the “copulatory rise”), and part of their breeding is to be able to have plenty of vertical space.

While I have never had SUTs breed from the get-go for me, I have been fortunate enough to have a female who was carrying babies on her back in various stages of development. When the SUTs arrived, there were a number of little babies in the water in the bag with the two adults, and when I put them in the tank I realized that one of the animals was a female with babies on her back. Her back looked like the cells of a honey bee hive, or the egg-crate covers for ceiling lights, covered with holes, each around one-fourth of an inch in diameter. Upon looking more closely, I saw little hands and heads sticking out from some of the cells. Once, I saw a froglet (actually a toadlet, I guess) sticking about half out of a cell, and while I watched, the baby SUT wiggled free of the cell on the mother’s back and made an immediate dash to the surface of the water to take a breath of air. This was reminiscent of films I have seen of a whale or porpoise being born — the first thing is to get a breath of air. The mother SUT popped out a dozen our more babies over a period of a week or so. Now that she seems to be done, the flesh on her back appears to be shrinking, and I presume that she will eventually appear just as the other SUTs do.

The babies seemed to stay at the water surface, and I removed them to a separate tank to try and rear them. Initially, I did not have much success because I had them in too large a tank and didn’t really know what to feed them. I finally settled on a small plastic goldfish bowl that holds maybe a quart of water. I have been feeding them freeze-dried plankton and finely ground fish food, but the real success came from feeding them baby guppies, the smallest I can find. Every day, I change their water, using water from the parents’ tank. A few of the babies have made it over the hump and now are really doing well, just about doubling in size in a two week period.

I consider myself incredibly fortunate to have gotten a female SUT with babies on her back and to have had the chance to witness their birth. The pair that the babies came from (I’m assuming the other SUT is a male) are still in their 29-gallon tank, and the other batch of 10 SUTs are in the tall 110-gallon tank. I’m hoping that I may be lucky enough to have them initiate the breeding process in my tanks. These are truly one of the most incredible creatures in the world. If you ever have a chance to get some, you will be amazed by them.

David Lass has played with fish for most of his life and has owned retail stores, a wholesale distribution business, and bred angelfish on a small, commercial scale. He keeps eight large (65- or 120-gallon) tanks, and tests and reviews aquarium products for his monthly “In The Fish Room” column for Aquarium Fish International (AFI).