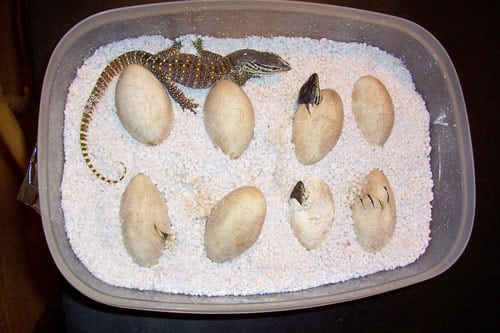 Captive Breeding Of The Argus Monitor

To breed the Argus monitor (Varanus panoptes horni), you must first (obviously) have a male and a female lizard. This monitor is actually one of the few documented species to have parthenogenetic eggs hatch. This is a genetic miscue versus adaptation, where the female provides two sets of chromosomes to the eggs, allowing them to develop and hatch. But don't hold your breath hoping for a solitary female to lay viable eggs. It seems that this is a rare and infrequent occurrence compared to the Komodo dragon. 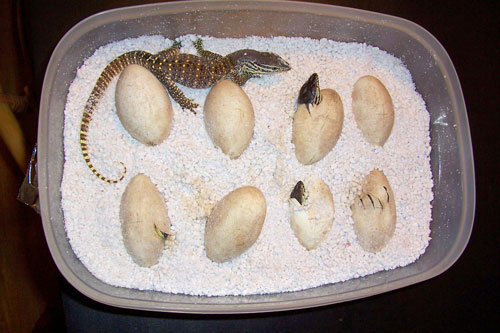 Argus monitor lizards pipping out of their shell.

Sexing of monitor lizards is quite difficult in neonates, but as they approach adulthood, this species shows certain traits that help deduce the sex of the animal. Often times, males develop very large and powerful front arms compared to the more dainty female build. Viewed from the side, the base of the tail becomes very thick and the hemipenes can often be seen in a sexually mature Argus male when the lizard is relaxed. The female will have no such thickness nor hemipenal bulges as the male displays. Lastly, adult males get much larger than females. I have not seen an Argus monitor female longer than approximately 40 inches in total length. Males are often 4 1/2 feet long and quite massive versus their female counterparts.

The best way to breed the Argus, and most monitor lizards, is to obtain a group of several babies of the same size and approximate age, and try to raise them up in a group setting where the cage is large, food is plentiful and there are plenty of basking areas and hiding areas for all. The young monitors will learn a pecking order and adapt early on to group living. Monitors naturally are not known to be communal away from breeding season, and oftentimes an adult who's been raised up alone is not tolerant of another monitor's presence, even of the same species, and will defend itself by posturing, hissing and even sometimes chasing or biting. But by them adapting to group living early on, they can become tolerant year-round of one another in a sufficient habitat.

Generally, a well-fed, heated and cared-for Argus pair will get to approximately 2 1/2 feet long by the first year, and they are surprisingly often sexually mature by this age. The road to maturity can certainly take longer, 2 to 3 years even, but generally it happens before 18 months of age. I can remember a female Argus of mine who was laying eggs at 9 months of age, yet another girl took 18 months under similar conditions.

When the female Argus is reproductive, she will suddenly become very fat in the abdomen and likely be basking and staying out and in the open a bit more than what's "normal" for her behavioral routines. This sudden bloating is from vitellogenesis, or yolking of the ova (eggs) inside of her. The female also will often accept more food than normal at this time. A couple days after the bloating is witnessed, she will begin giving off chemical signals – pheromones – that the male will be enticed by. He will slowly and methodically follow her around the enclosure no matter where she goes. The female will actually elicit the courtship by walking slowly and looking back at times. Eventually, the male will position himself on the back of the female, strum his hind leg on her tail and pelvis, and she will curl her tail up and allow mating to take place. They will mate off and on, all day long, alternating sides/hemipenes session. This can last from two to seven days.

Following the mating sessions, the female will usually not tolerate any more copulations and (presumably) stops emitting the pheromones to mate as well. They will sometimes allow the male to be present, and other times become quite intolerant of the male's presence. The keeper must decide the risks versus benefits of leaving the pair together versus separation. Generally, I leave my animals together throughout the process with no negative effects.

It is important to note that the female needs to feed well and bask, as she feels necessary, during this critical time of egg development. Keep an eye on the animals and decide what each individual needs. If the male is excessively dominant to feed and control the basking areas, a separation may be warranted.

After approximately 27 to 30 days post-mating, as she grows larger and larger in the abdomen, the female will dig down into the cage substrate or nesting box and construct a nest. This is often done at night, and you can hear them meticulously digging for long hours. It is often finished by morning. Given ample nesting space, and slightly moist soil or sand kept in the mid 80-degrees Fahrenheit temperatures (ideally 86 degrees or so has been preferred by my animals time and time again), the female will lay five to 12 enormous eggs in a clutch. An Argus egg is as big as a chicken egg from the grocery store. It's amazing that these animals can hold such large eggs in their small bodies! The female will backfill the nesting area after laying, and it's difficult to discern where she deposited the eggs. The female will then want to soak in some water and take a long drink. She is also normally ravenous after egg deposition.

Removing the adult animals from the cage (never attempt to dig up a female Argus monitor's nest while she's present, as she may have a go at you), carefully excavate the cage or nesting box for the eggs.

Being careful not to rotate the eggs (keepers often will put a soft pencil X-mark on the top of the eggs for reference), transport the eggs into an egg box that is filled with approximately 1:1 by weight, not volume, water and medium. Mediums include perlite (preferred by the author), vermiculite, HatchRite or sand. Bury the eggs halfway in the medium, and place the box in an incubator set to 84 to 86 degrees. The eggs will incubate for 170 to 200 days. Vent the boxes weekly, or poke a few holes in the egg boxes for air exchange. About a week prior to hatching, eggs will often dimple or dent in. It is important to know that this denting is normal shedding of the water in the egg prior to hatching and not to add water mistakenly, assuming the eggs have become dry. The babies will pip their heads out and remain in the eggs for a day or two. There is nothing more rewarding than seeing those little mini-adults peering back at you from the eggs.

Babies are placed in small groups, normally two to four per 30-gallon sized cage. It's important to have the cage be warm and humid. Screen tops and lamps over aquaria do not achieve this easily. Temperatures are generally the same as the adults, but no night drops below 75 degrees. Offer a basking spot around 110 degrees. I place babies in cages that are just like the adult enclosures. They have cork tubes, stones and some sandy/earthy substrate to hold humidity up and to dig into. Typically, newborn baby Argus monitors will not eat for four to nine days after hatching, as they're born with bellies filled with yolk. Shedding in monitors is not a large, single event; it's more a few pieces here and there within three weeks of birth. It seems almost constant because they grow up so quickly.

Justin "Krusty" Burokas has successfully kept and bred various lizards for more than 20 years, including the Argus monitor since 2003. Since childhood, he has had a passion for lizards and a particular interest in the natural history and herpetoculture of varanids. In 2008 he contributed an article about his work with Varanus acanthurus to Biawak, the journal of the International Varanid Interest Group.