The story of Rupert and Jeremiah.

Things were going well for Sean and Hazel Kelley. They had recently moved their pet store, Stinger’s Exotics, from a 700-square-foot store into a 1,400-square-foot-store in Livonia, Mich. Hazel and her mother, Jackie May, ran the store, which specializes in herps.

But the Kelleys were about to be the target of a small theft ring implicated in the burglaries of two pet stores, a small zoo and a wildlife sanctuary. Hundreds of animals were taken in the thefts.

On July 14, 2007, at about 4 a.m., Hazel Kelley’s dream turned into a nightmare. Burglars used the landlord’s ladder to gain access to the pet store’s roof. They tried to cut holes in the roof to get in, but they couldn’t get through the concrete.

The burglars weren’t deterred by this minor setback. They bashed in the back door, disabled the alarm, stole the digital video recorders that housed all the action the cameras had caught. The thieves made off with dry goods including lighting, UVB bulbs, heat pads, dry foods, calcium powders, mite remedies, forceps sets and probe sets.

But it was the loss of the animals that really bothered Kelley. “All together, well over 300 animals were taken,” Kelley said. Some of the store’s inhabitants were not for sale – they were Kelley’s pets.

On Nov. 6, Kelley received a call from a detective to go to the Flint area of Michigan to identify her animals.

“We were excited but not sure if they were our pets,” she said. “But it definitely got our hopes up.”

When Kelley arrived at the apartment to identify the reptiles, she asked a detective if there was a picture of the culprits. She pointed to a picture and the minute Kelley saw the picture, she recognized them.

"They were actually customers that had come in a few times,” she said. “There was no reason to mistrust them.”

Of the 69 animals retrieved from the apartment, Kelley only got back 10 of the 300 stolen animals.

Two of the animals returned were Rupert and Jeremiah.

How Rupert Got His Name

Rupert, the savannah monitor, got his name from the TV show Survivor: Pearl Islands. The show was airing when Sean Kelley brought home the baby savannah monitor. Rupert was a popular character on the show. “That wonderful TV personality, Rupert, stole his way into being our favorite character on the show,” Hazel Kelley said. “We are such big fans of the show that we close the store every Thursday at 7 p.m., just so we have time to make it home to watch.” 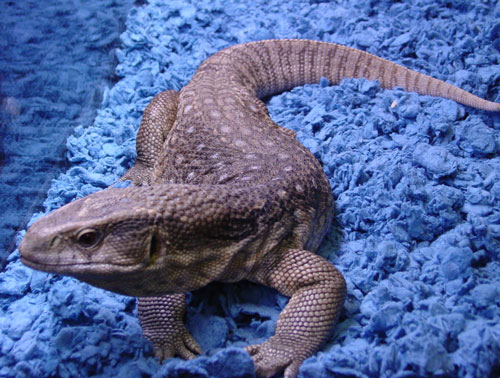 With little money to start the pet store, the Kelleys had a huge decision to make – to bring some of their personal pets to start the shop. The decision was made and Rupert began his life at Stinger’s Exotics. 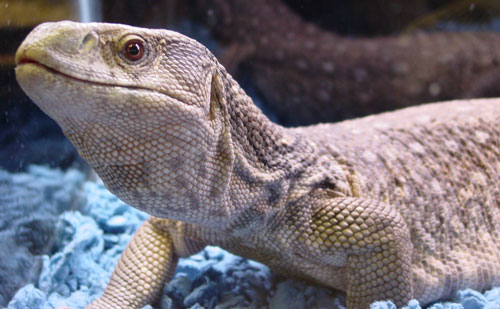 Soon after the store opened, a man came in and expressed his interest in Rupert. The Kelleys screened him to make sure Rupert went to the best home possible. They made a pact with the man that if at any time he could not care for Rupert, whatever the case, they would take Rupert back. The man agreed and away he and Rupert went.

More than a year later, the phone rang. Hazel answered the phone and a man on the other end said that he had enlisted in the military and was soon to depart. He wanted to give Rupert back. At that time the Kelleys made a new pact with the man; Rupert would be theirs, never to leave the store again.

The Kelleys set up a display in Stinger’s Exotics telling the story of how Rupert had left and returned; about his previous owner enlisting in the service; and how they would continue to raise him. Rupert grew as the store did. As years went by everyone knew who Rupert was. “The Store Fat Boy,” everyone called him. Several people inquired to purchase him – even bidding ridiculous amounts of money.

How Jeremiah Got His Name

Jeremiah got his name from the Three Dog Night song, “Joy to the World” – “Jeremiah was a bullfrog; he was a good friend of mine.” 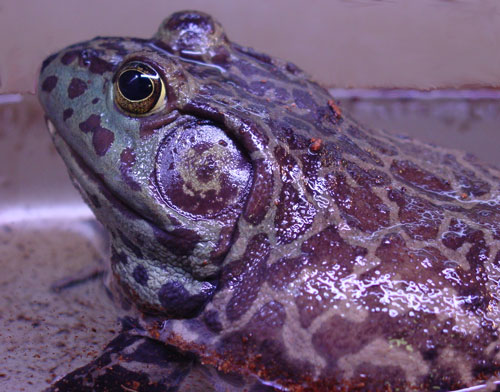 Sean Kelley insisted on purchasing a few bullfrogs, Hazel wasn’t crazy about the idea, but nonetheless several bullfrogs were added to the Stinger’s Exotics family. People would ask Hazel questions about the bullfrogs, she started telling people about them, and showing them how and what they’d eat. It was then that Hazel formed a bond with Jeremiah.

Jeremiah quickly fell into the Kelley’s routine. He knew that everyday at 4 p.m., a mouse would be coming his way. Often, the store would be busy and Jeremiah would not get his mouse on time, that’s when he started calling out every day at 4 p.m. for his mouse. No matter how busy Hazel was, Jeremiah would call out until he got his mouse. When Jeremiah demanded his mouse, everyone had to wait. Customers would all pause; Hazel would take him his mouse, the customers would laugh and then business would commence.