Breeding savannah monitors (Varanus exanthematicus) have more stringent requirements than monitors simply kept in captivity. They need facilities that will induce many complex behaviors, such as mating, nest excavation and egg laying, and a simple display setup doesn’t provide these facilities. 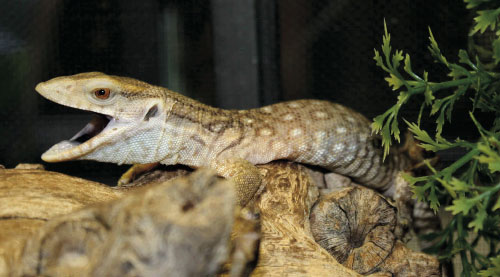 Robust and hardy, these lizards thrive under the care of experienced lizard-keepers.

To breed savannah monitors, you must first provide an environment that encourages reproductive behavior. At the very least you need a large terrarium measuring at least 6 feet long, 6 feet wide and 6 feet tall with at least 3 feet of soil substrate.

A mature pair of savannah monitors should be at least 1.5 years old or more. Sexing monitors can be tricky, even for experts. Males tend to have large post-cloacal bulges formed by the stored reproductive organs, but female monitors also have long, retractable structures. If you have several monitors available, the comparison between the sexes is easier. Males in good health tend to have slightly larger and broader heads than females. Mature savannah monitors also often show subtle behavioral differences: Females are often more retiring and less likely to eat while being watched, but this observation should be considered a guide, not a firm rule.

In the early stage, female savannah monitors are receptive to mating, and males are aware of this timing. Mating may take place briefly on one day or be prolonged over several. It occurs when the male successfully mounts the female’s back, and their tails contort so the cloacas are next to each other. Actual copulation may take several minutes or an hour. Males should be separated from females after mating occurs.

Soon after mating, the female savannah monitor starts digging test burrows until, some three to four weeks after mating, she excavates one into which she lays her eggs. The average clutch is between 12 and 20 eggs, but some monitors have produced as many as 41. When she is finished, she fills in the nest and ignores the eggs.

At this stage, you must carefully unearth the eggs, and remove them to a safe incubator. If eggs are left in the terrarium, it is possible that one of the adults will eventually dig them up and eat them. Be careful when removing the eggs; do not turn or rotate them. Turning a reptile egg may suffocate and kill the embryo.

There are many favored incubation mediums, so your choice will be based on your preferences. Some lizardkeepers use a mixture of potting soil and vermiculite, vermiculite alone, soil and perlite, perlite and sand, and other materials. Whichever you choose, the material should be mixed with water until it is damp almost like clay, but not wet. The material must hold enough water to supply the eggs’ needs but not so much as to induce drowning.

Eggs may be placed in small plastic containers with about half an inch between each egg as well as between the eggs and the sides of the container. Place the container in a warm, dark place, such as a large commercial incubator or a dedicated closet, and keep them at a constant temperature of 78 to 88 degrees Fahrenheit.

Check the eggs every few days. Healthy eggs are robust and white or slightly off-white. Those that become dimpled or discolored (yellowish or brownish) are dead, so remove them immediately. No matter how impatient you become, do not turn or try to slit eggs. They must hatch naturally, at least until some eggs in the clutch are doing so. Hatching commences in five to six months, and young savannah monitors tend to hatch within hours of each other.

Once you have neonate savannah monitors, set them up in groups of two or three in terraria about 18 inches long, 12 inches wide and 13 inches tall. A standard 15-gallon tank will be fine. However, an ideal height is 3 feet, so the young monitors can climb. Give them plenty of individual hiding and climbing places, a dish of clean water in which they can soak, and a near-constant supply of gut-loaded live insects.

Once these savannah monitors measure 5 inches in total length, move them to larger terraria, or keep no more than one monitor per smaller terrarium. 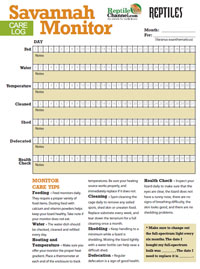