For red-footed (Chelonoidis [Geochelone] carbonaria) and yellow-footed tortoises (Chelonoidis [Geochelone] denticulata), breeding can occur anytime during the year, but it seems to coincide with the onset of the rainy season. A great deal of literature states that the males will fight, and it’s necessary to have more than one male to stimulate reproduction. I have not noticed such behavior in my groups. My males tend to ignore each other. 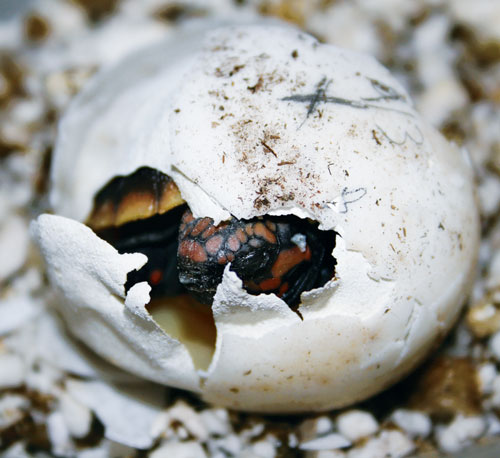 A neonate red-footed tortoise peeks out of its shell.

Occasionally, a male gets in a female’s face and head-bobs. Red-foot males tend to have a fast side-to-side jerk, but yellow-foot males have more of a long sideways sweep. Males tend to follow females around until they can position them correctly for mating. The bottom of the male’s shell is concave, which allows for a snug fit over the top of the female’s shell.

Red-foot males make an unusual noise during mating. It is a loud clucking sound almost like that of a chicken. Yellow-foot males also vocalize, but it is a much mellower version of the red-foot’s cluck.

Because red-footed tortoises and yellow-footed tortoises are capable of producing eggs at any time during the year, a nesting area or chamber should always be available. A restless female wandering around the enclosure looking for a nesting site is the most obvious sign that eggs are on the way.

Most females seem to nest in the evening and prefer areas with moist substrate. Sometimes they dig a hole and walk away from the nest without depositing eggs. Fill this test hole back in, and the female will most likely nest in that area in the next day or so. Red-footed and yellow-footed tortoise nests appear to be shallower than other species’ nests. Occasionally eggs are barely covered. Females can produce several clutches a year. Clutch sizes vary from one to 13 eggs, but three to eight is the norm.

Before digging up the eggs, set your incubator to maintain a temperature between 84 and 88 degrees Fahrenheit. Purchase a digital minimum-maximum thermometer with a probe, which you should place in the incubator next to the eggs, so you can monitor the temperature. Just like with other tortoise species, temperatures at the lower end of the acceptable range produce males, and temperatures at the higher end produce females. Temperatures in the middle produce a mix of the sexes.

When your incubator is set, prepare the tortoise egg container. Fill it halfway with moist vermiculite, and use equal weights of vermiculite and water to obtain the optimum moisture content. Carefully dig up the eggs, and be sure not to rotate or flip them because this can suffocate the embryo. Use a soft-lead pencil to mark the date and an “X” on the top to help you remember the correct orientation. Bury tortoise eggs halfway in the vermiculite.

A lid on the tortoise egg container is not necessary if you can keep humidity in the incubator between 70 and 80 percent. You can accomplish this by occasionally misting the vermiculite, and keeping a deli cup of water and/or a moist sponge in the incubator. Open the incubator daily to give the eggs fresh air. Incubation times vary for both red-footed tortoises and yellow-footed tortoises, but 120 to 190 days is typical, and 145 days is average.

Hatching is an exhausting process for baby red-foot and yellow-foot tortoises, and it can take one to three days. They start by poking a tiny hole in the egg with their egg tooth, a structure on the upper jaw just below the nostrils. Then the babies tend to sit in the egg for a couple days while they absorb their yolk sacs.

At this time, I move the hatching eggs very carefully to another incubator set up just like the original one. The only difference is that each egg gets a deli cup with moist vermiculite. This prevents the baby tortoise from exiting the egg and overturning other eggs in the clutch, which could cause the death of siblings.

When the tortoise has left the egg, a moist paper towel replaces the vermiculite as the substrate. A hatchling usually has some of its yolk sac sticking out at this time, and the moist paper towel prevents it from sticking to the deli cup.

Occasionally a baby tortoise hatches with a great deal of its yolk sac still visible. Be very careful not to pierce that sac. Apply Vaseline or surgical lube to it, and place the tortoise in the deli cup with the moist paper towel. Keep the paper towel moist until the yolk-sac site has healed.

Hatchling red-footed tortoises and yellow-footed tortoises should stay in the deli cup and incubator for five days or so while the yolk sac is being absorbed and digested. Babies can be moved to a hatchling setup once their yolk sacs are completely absorbed.