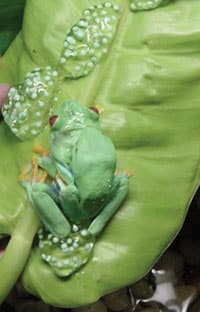 In their natural habitat, red-eyed treefrogs (Agalychnis callidryas) breed during the rainy season, which occurs from late May through November. Peak activity occurs in June, and occasionally there’s a second peak in October. 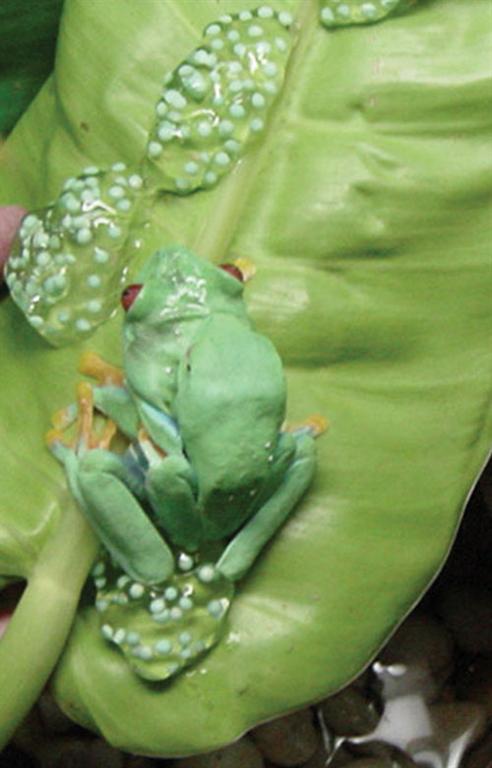 In captivity, breeding can be induced at other times of the year, but it seems to work best if breeding attempts coincide with pressure changes that accompany storm fronts. There is some confusion about timing of the rainy season in care sheets available on the Internet. Most indicate that it occurs from October through March, but scientific literature, as well as climate information for the countries where red-eyed treefrogs are found, agrees with a May through November rainy season.

In addition to a simulated rainy season, breeding red-eyed treefrogs require group housing. Three or more males to two or more females seem to be an optimal ratio to produce fertile eggs. Of course, the frogs must be old enough and in the mood. Red-eyes appear to respond to pressure fronts. The best way to tell if they are ready is to look for a male’s dark-brown nuptial pad near the base of the outside of its thumb.

Our red-eyes are maintained in relatively dry conditions of 30 to 50 percent humidity. We feed them very heavily for one to three months before breeding them. Then they are placed into a rain chamber, and rain falls lightly on them daily for three to four hours around dusk.

If they are in the mood, amplexus is generally seen within one to two days. In amplexus the male climbs on the female’s back and grasps her under the front legs. He will remain in this position until the female lays eggs. Then he deposits sperm over the eggs. For some frog species amplexus can last for several days, but for red-eyed treefrogs, eggs are usually found suspended on the underside of leaves overhanging the water within one to two days.

Females usually deposit eggs in three to four clusters, and clusters can contain anywhere from a few to almost 70 eggs. The most common range is 20 to 40. We remove the leaf with the eggs attached and suspend it over frog-safe water using either a quart-sized glass canning jar or PVC pipe cut in half to make a slide into a plastic tub. Seven days later, tadpoles hatch out of their jelly coats and drop (or slide) into the water.

Tadpoles can be housed in a group, but be careful not to overcrowd them because they can be cannibalistic. We use 5-gallon plastic tubs and house 20 to 30 tadpoles per tub. We reduce the number per tub as the tadpoles grow.

Twice a week, half of the water is replaced with fresh water. As tadpole size increases, this period increases to every other day. Tadpoles are fed daily using high-quality tropical fish food, such as Sera Micron, brine shrimp flakes or TetraMin’s The Rich Mix. We offer enough food to be consumed within 10 minutes.

Tadpoles grow at different rates, but the first rear legs appear in about 30 days, and front legs start appearing in about 36 days. Once tadpoles have produced legs, they stop eating until they have reabsorbed their tail completely. As soon as they have front legs, froglets climb out of the water — even before the tail is gone.

Once their tails are completely reabsorbed, froglets can be offered flightless fruit flies or small crickets, and they can be housed like the adults but in smaller tanks.