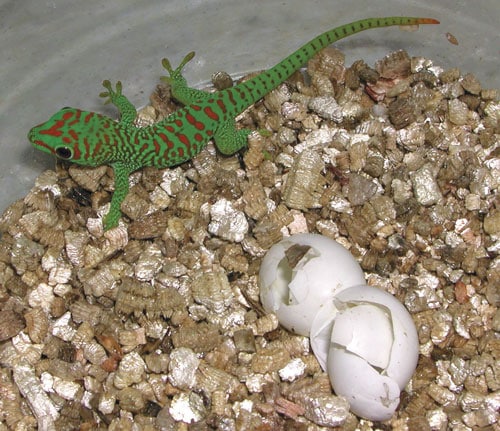 Most giant day geckos are ready to breed by the time they are 12 to 14 months old. Young females may begin to lay infertile eggs at 10 months old, but it is recommended that they not breed until they reach an adult length of 6 to 8 inches. Adult, sexually mature males have large, well-developed femoral pores. Females have weak femoral pores or none at all.

Introducing Giant Day Geckos To Each Other

Select a healthy, sexually mature male and female giant day gecko. If newly acquired, both should be well-acclimated to their environment before being introduced to each other. This acclimation could take one day or up to a month depending upon the gecko.

Prepare a large enclosure no smaller than 2 feet long by 1½ feet wide by 2 feet tall. No other male or female day gecko, or any other reptile, should have occupied it before. Introduce the pair into the habitat one right after the other. Long delays before introducing the second gecko can allow the first to become territorial and cause it to be aggressive rather than attracted to the second gecko.

Watch the two geckos for any possible problems. Good signs include head wagging (moving heads from side to side and bobbing them up and down), licking, a male showing its back to the female, and finally the female’s acceptance. She will allow the male to grab her by the neck as he mates with her.

Regretfully, day geckos, including the giant day gecko, can and do beat, maul and sometimes inflict mortal wounds on their mates. A geckokeeper needs to keep constant watch and be prepared to separate pairs that show distinct signs of aggression, such as chasing, or when one gecko constantly hides. Having one male and two females in one enclosure for breeding increases the probability of aggression problems, which is why we do not recommend breeding trios.

Following successful breeding, a healthy female produces one to two hard-shelled eggs. Often they’re attached to each other. These eggs are usually found in the axis of sansevierias or in open areas of bamboo. Giant day geckos don’t glue their eggs to surfaces, so the eggs can easily be removed for incubation.

Being careful to keep eggs from rolling from their original position, place eggs in an incubator on a moist substrate such as vermiculite. The incubator should be about 82 degrees Fahrenheit with a humidity of 60 percent, and eggs typically hatch in 55 to 65 days.

Some experienced geckokeepers incubate eggs outside of temperature-controlled incubators. Placing eggs in humid, ventilated containers, they maintain the containers in normal, room-temperature conditions: daytime temperatures in the mid-80s and night temperatures in the mid-70s. Some of these geckokeepers attain healthier offspring and a stronger male-to-female ratio. Very useful in breeding giant day geckos, this temperature-variation method has proven even more effective in other Phelsuma species that previously produced poor male-to-female ratios in their offspring. 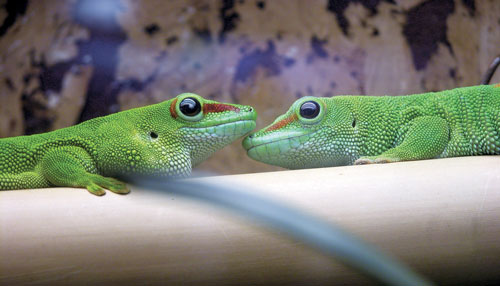 Photo by Leann and Greg Christenson

This giant day gecko pair, Wilma (left) and Fred, have lived together for years. When introducing geckos, place each in the habitat one right after the other, and watch for potential problems.

Hatchling and juvenile giant day geckos should be reared separately from adults and, for better growth rates, from each other. When juveniles are raised mostly alone, they don’t have to compete for food and face the possibility of aggressive behavior from their siblings. Humidity levels and cage temperatures should be the same as adults: 55 to 65 percent humidity and 80 to 88 degrees with a basking spot just above 90 degrees. Nighttime temperatures can drop to the mid to low 70s.

Feed young giant day geckos daily for the first one to two months for the best growth. An alternating food schedule works well. Feed geckos nectar substitute (fruit baby food and/or commercial gecko food) one day, and feed them five to 10 pinhead to one-eighth-inch crickets the next. Feeding can be reduced to adult levels, three to five appropriately sized crickets presented twice weekly and fruit baby food mixed with a commercial nectar substitute once a week, by the time the geckos reach 9 months of age.