The breeding of Diplodactylus has some distinctions between species, but for the most part all species follow the same basic principles. 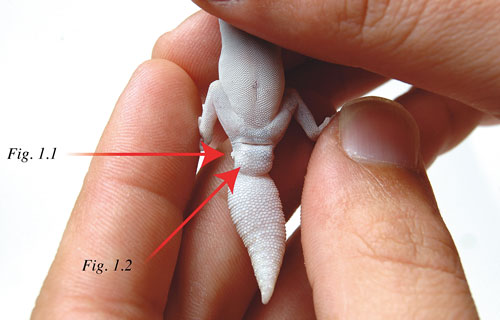 Before breeding you’ll naturally need to determine the sexes of Diplodactylus. A male is pictured here. Figure 1.1 indicates the hemipenal bulge, and Figure 1.2 points out the cloacal-type spurs.

Breeding programs for most Diplodactylus species include one male for every two females. The first step is always sexing, and there are two ways to sex adult Diplodactylus. Looking at the underside of the gecko, just below the vent, is one way. Males will exhibit enlarged hemipenal bulges; females can show some enlargement in this area, but they display a smooth enlargement without any depression. The second method involves locating a male’s cloacal-type spurs, which are located at the top of the hemipenal bulge. The spurs are usually a grouping of spines significantly larger than their adjacent scales. Displays are species-dependent, but they are usually at least 200 percent the size of regular scales and consist of two to six scales. 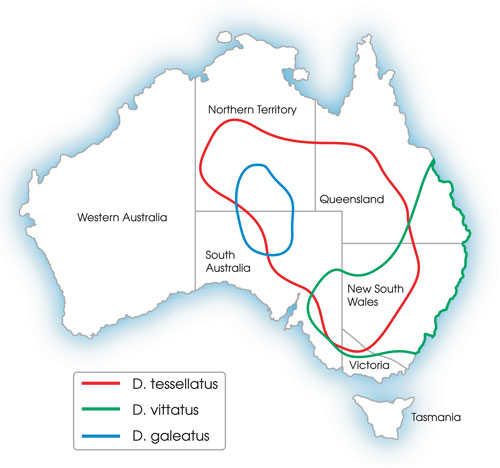 This map illustrates the wild range of three of the more common Diplodactylus species.

When to Breed Diplodactylus Geckos

One of the most common questions I hear is: “How old should a gecko be before you can start breeding it?" 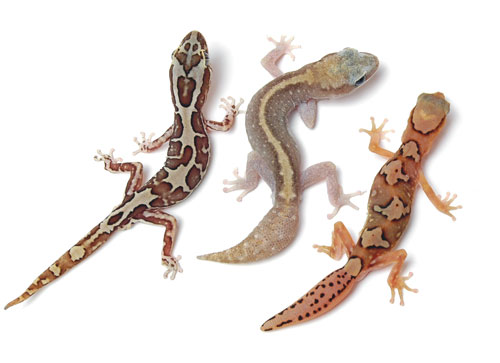 Diplodactylus geckos are small Australian geckos that exhibit a variety of colors and patterns. Pictured left to right are D. steindachneri, D. vittatus and D. pulcher.

Geckos, like people, grow at different rates, and some take a longer or shorter time to reach their mature weight. Females might become reproductive at around 1 year of age, but I recommend ensuring the female has reached her full adult weight and size before breeding her. For females, reproduction can be stressful, and if the females are too young or too small, it can result in egg-binding and calcium depletion. It also may stunt essential growth. In my experience, waiting until the female is adult weight helps ensure a productive and safe breeding cycle.

As for males, I believe it is equally important for them to achieve proper weight and size before being bred. 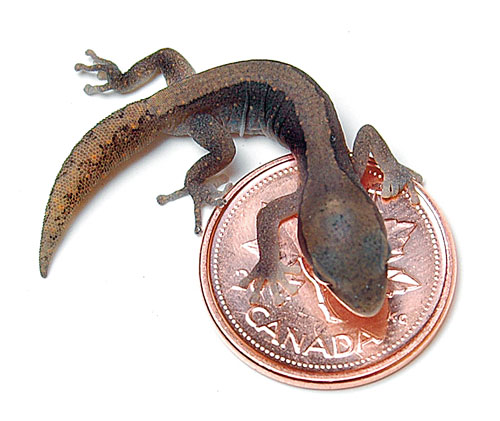 When babies hatch they are typically one-fourth of their adult size. You can get a sense of how small they are when looking at this baby D. vittatus on a penny.

Once geckos are large enough to breed, enter them into a cooling or cycling period to stimulate and control their breeding cycle. In their natural habitat Diplodactylus breed in the spring, which for Australia is September through February. However, if you create artificial “seasons” by cooling your geckos, breeding can take place at any time of the year. 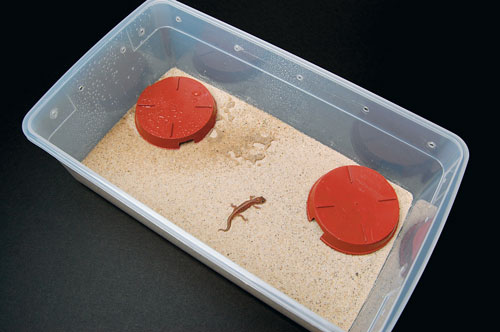 Young Diplodactylus, such as D. steindachneri, thrive in this type of hatchling setup.

Cycling-cooling periods generally range from four to eight weeks. During this period expose the geckos to temperatures ranging from the mid to low 60s Fahrenheit. Do not offer any food at this time. After this period, warm them slowly back to normal temperatures. Breeding usually begins right away.

Within a month or two after mating, females become noticeably larger and will be ready to drop their eggs. At this time provide a nesting box for the female; I place mine in the front corner of the enclosure. The nesting box can be a plastic container and a cover with a small entry hole cut into the lid to allow the gecko access. Fill the container with moist vermiculite, which allows the female a secure place to bury her eggs and also helps prevent the eggs from drying out. 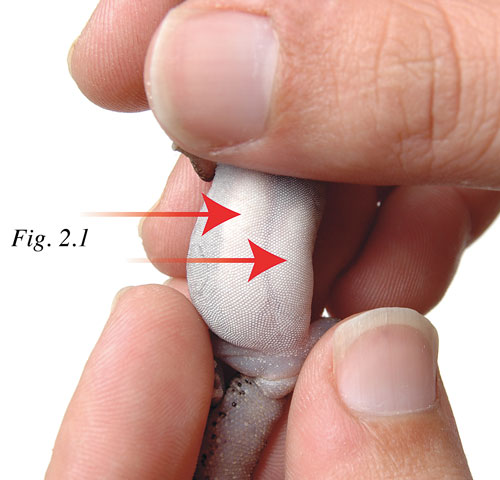 Eggs are clearly visible inside this gravid female. She will soon deposit them into a egg-laying container.

A pair of eggs comprises a typical clutch. They are small, ranging from about half an inch long for the smaller D. tessellates to about two-thirds of an inch for the larger D. galeatus.

Females of most species will multi-clutch, and it is not uncommon for proven breeders to provide three to four clutches per year. After the breeding season is complete, separate males and females to allow the females a break from the breeding program. 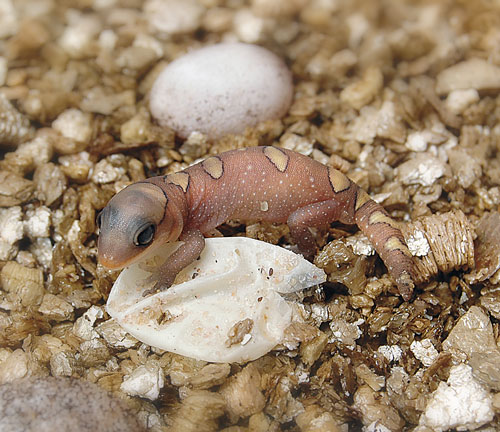 When incubated at 86 degrees Fahrenheit, Diplodactylus eggs typically hatch within a 60-day period. Seen here is a D. galeatus moments after hatching.

After the eggs are laid, carefully remove them, and place them in another container, one with a tight-fitting lid, filled with moist vermiculite. Place each egg in a narrow divot on top of the vermiculite, attach the lid and place the container into an incubator.

I incubate all Diplodactylus eggs at 86 degrees for the full period of incubation, which ordinarily lasts about two months. During incubation, open the lid of the egg container twice a week to allow a fresh-air exchange. Wipe excess condensation from the underside of the lid at these times.

When the baby geckos emerge from their eggs, they quickly become active. At this time they are about one-fourth the size of an adult.

I always remove offspring from egg containers right away, so a hatchling will not disturb any neighboring eggs or become dehydrated. Babies are transferred into hatchling enclosures, which are set up as smaller versions of the adult enclosures. I use shoebox-sized containers with sand and two hide huts. I house the geckos individually, and offer a secure and calm environment during their transition period.

One of the tricky things with hatchlings is that you have to be very careful that they do not become dehydrated. They are very small when born, and as a result, dehydration can happen quickly. I mist babies once a day. Don’t spray enough water to create humidity, but rather focus on providing water droplets on the walls of the enclosure that the geckos can drink.

Once a baby gecko has completed its first shed, which usually happens within a week of hatching, baby pinhead crickets can be offered.