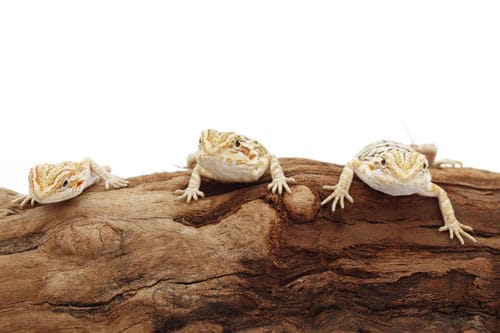 Q: Hi. I have a 1½-year-old female beardie in a 55-gallon tank, and we decided that we want to mate her, so we purchased a male of the same size. They seem to be doing OK together – no aggression or anything. I guess my question is: Are they the right age? As soon as they hatch babies, do we separate them or keep the mother with the babies and separate the male? I am a little confused here. Thank you for your time.

A: You seem very confused about what’s involved in breeding bearded dragons. You can’t have the female lay her eggs in the 55-gallon tank and expect them to hatch on their own. Female bearded dragons aren’t very maternal, and they don’t guard their eggs in captivity. Most likely your female wouldn’t recognize her babies, so she and her mate would begin consuming them.

Let’s go over the basics and take it from there.

First, make sure you have a male and female. I suppose it is too late for this part, but you should always quarantine new herps and have them checked by a vet before introducing a new potential mate to your established pet. 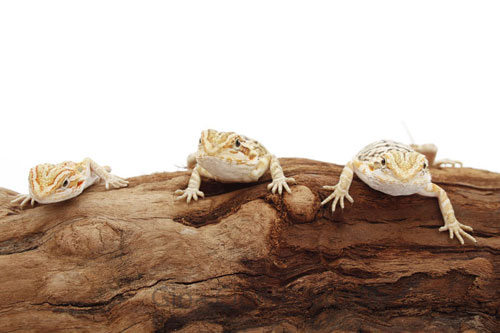 Before setting up a pair of bearded dragons for breeding, it is essential that the habitat is correct for the species. There should be a temperature gradient of 77 to 88 degrees Fahrenheit with a focal basking spot of 105 degrees. The beardies should be on a balanced diet with adequate calcium. The lizards must be in optimum condition — especially the female — because breeding, developing eggs and then laying eggs (called oviposition) takes a lot of metabolic energy.

There should be enough room for two adult beardies to comfortably cohabitate, branches for climbing and a rock or nontoxic plant (or two) to allow one to retreat and hide from the other if necessary. Keep in mind that keeping your bearded dragons together is temporary. You will need two separate habitats in the long term as well as a suitable habitat for the hatchlings when the time comes.

Full-spectrum lighting, including UVB, is necessary for proper calcium metabolism. Either natural sunlight (not filtered through glass or plastic) or an electric bulb that produces UVB is a necessity.

For optimum fertility, provide a period of decreased temperature and daylight hours, called brummation, for two to three months or a minimum of two to four weeks. Although many beardies successfully breed without a brummation period, you can expect decreased fertility if the rest period is not provided before breeding season.

Once a sexually mature male is ready to breed, its beard darkens. He will bob his head and stamp his front feet to gain the attention of a female. He may begin chasing her around the enclosure, and he may bite the base of the female’s neck while attempting to position himself for breeding. The male then everts a hemipenis and inserts it into the female’s cloaca.

A female usually lays her eggs four to six weeks after a successful mating. While developing her eggs inside the shell gland, she will appear fuller in the abdomen, and she may eat less and less. Eventually, she may stop eating altogether, though some don’t.

To successfully breed, it is best to place the female with a male of equal size or weight. It is recommended that females not be bred until they are at least 18 months old or more than 350 grams. So, you will need two suitable habitats for your beardies, not just one.

A lay box is a plastic box filled with moist topsoil, or potting soil, placed in the cage at a slant. This box allows her to dig and oviposit her eggs. A female ready to lay will dig and pace to the corners of her cage.

I am not going to go into removing the eggs, incubating the eggs, hatching out neonates and caring for the hatchlings. I just wanted you to show you that a whole lot more is involved in breeding beardies than simply putting a male and female together. Breeding requires dedication, preparation, planning and knowledge of the reproductive habits of these amazing agamid lizards.

I recommend you purchase a good text on bearded dragons or spend some time visiting some of the excellent bearded dragon websites out there. They will explain in greater detail what is involved in successfully breeding beardies and hatching the eggs.

If you are looking for a herp-knowledgeable veterinarian in your area, a good place to start is by checking the list of members on the Association of Reptilian and Amphibian Veterinarian (ARAV) web site at www.arav.com. Look for DVMs who appear to maintain actual veterinary offices that you could contact.