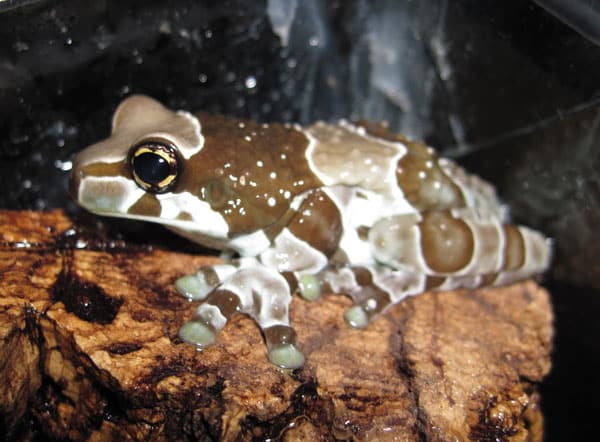 In nature, Amazon milk frogs (Trachycephalus resinifictrix) breed exclusively in tree holes. These holes face upward, where rainfall keeps them filled with water. From these holes, males call to attract females, and if they are lucky, a female arrives and the pair engages in amplexus. Eggs are laid on the surface of the water in the hole. Tadpoles will feed on just about anything available to them, but a large part of their diet in nature consists of eggs of their own species. While female milk frogs do not feed infertile eggs directly to the tadpoles as some other types of frogs do, adults frequently breed repeatedly in the same hole, and the resulting eggs are eaten when there are already tadpoles inside.

In captivity, breeding occurs when milk frogs are healthy, well-fed and offered a suitable, water-filled area to deposit eggs. While some breeders report that cycling them through artificial rainy seasons in a rain chamber is needed, others have found their frogs to breed regularly throughout the year regardless of altering temperature, humidity or placing them in a rain chamber. Before attempting to breed milk frogs in captivity, realize that hundreds of frogs can result from a single successful breeding, so make sure you are prepared for the work involved in caring for offspring before trying to breed them. 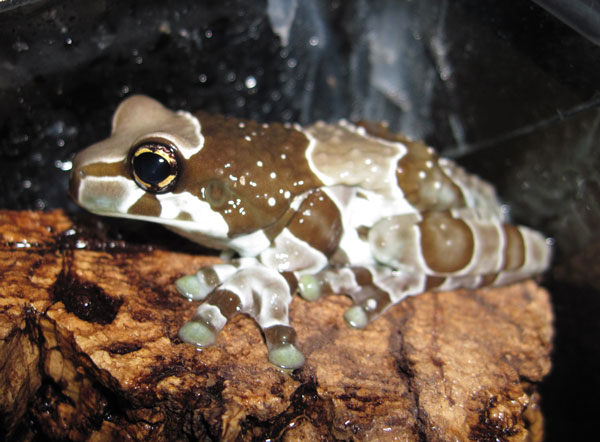 Hundreds of milk frogs can result from a single successful breeding, so you need to be prepared.

The easiest way to tell male milk frogs from females is size. Males are smaller, rarely exceed 2 1/2 inches in length and are somewhat more streamlined in appearance. Adult females are big and fat, growing up to 4 inches long. Male frogs also call, so if you notice vocalization, you have a male. Milk frogs are mature at one and a half years of age, but usually the sex of an individual can be determined even earlier.

If breeding is your goal, you may want to go with a large group of frogs, say five to ten individuals, rather than just a pair. As with many tree frog species, having more males than females in a group helps promote breeding, so take this into consideration, as well.

Replicating a tree hole for milk frogs to breed in may not be as hard as you think. To a captive frog, a large water dish resembles a tree hole closely enough, and milk frogs often will simply deposit eggs there. Alternatively, you may consider matching the size of the water dish to the diameter of a large cork bark tube and wedging the cork into the dish so it stands vertically in place on its own. This creates a water-filled tree hole, which is easily accessed and cleaned, perfect for tree-hole-dwelling amphibians. Another option is to create a tree hole out of a plastic box, into which a hole large enough for frogs to enter and exit is cut. Fill the bottom of the box with a couple inches of water.

Some breeders have had success by simply filling the entire bottom of the enclosure with several inches of water instead of using a dish. In this approach, it is important to have lots of objects, such as cork bark flats and tubes or driftwood, protruding from the water surface so that frogs can exit easily. The result is that the terrarium itself essentially turns into a tree hole as far as the frogs inside are concerned. Whichever type of hole you create, make sure to change the water frequently, even daily if a small volume of water is used.

If there is a suitable breeding site, a group of well-fed and cared for males and females are likely to breed without too much additional stimulation. However, you can try moving frogs from their normal housing to a rain chamber if females look particularly plump but no amplexus or egg deposition is observed.

Milk frog clutch size varies and can range anywhere from around 100 eggs and up to more than 1,500. If eggs are noticed, remove the entire dish, plastic box or other tree hole from the terrarium to a separate enclosure so they are not disturbed by the adult frogs. Tadpoles will break free from the egg mass in as little as two days.

Once eggs hatch, tadpoles can be moved to aquariums. Due to the large number of tadpoles that can result from a single clutch of eggs, you may need to divide tadpoles between several aquariums as they mature and start producing more waste. While wild milk frog tadpoles have been found developing in tree holes at densities as high as 60 tadpoles per gallon of water, it is probably advantageous to raise them in lower densities if you have the room.

Tadpoles can be fed ground fish flake daily once they are active and begin to move around. They do not need to be fed their own species eggs in order to develop properly. Take care not to over feed. Most food should be eaten within a couple hours after tadpoles are fed.

Sponge filters can be used to help maintain water quality along with 20 to 30 percent water changes a couple times each week. Alternatively, you can opt for using no filtration so long as water changes are performed more frequently and tadpoles are not stocked densely. At water temperatures between 74 and 78 degrees Fahrenheit, tadpoles will complete metamorphosis at 38 to 75 days. You can use submersible aquarium heaters with thermostats to heat the water if needed. Always use a thermometer to measure water temperature to ensure it is within an appropriate range.

Once front arms are noticed, move tadpoles to a separate container with shallow water less than an inch in depth and some dead leaves or other objects sticking out from the water’s surface. When the tail is being absorbed, the small half-inch long milk frogs will climb out of the water and can be moved to a terrarium.

A simplistic setup with moist paper towel substrate, several live or artificial plants, and a water dish will allow you to monitor the young frogs’ health and growth easily. As many as 20 or more newly metamorphosed frogs can be maintained in a standard 5-gallon aquarium, but as they grow, they should be sorted by size into additional enclosures, reducing the density and preventing smaller frogs from being out-competed for food.

Flightless fruit flies and small crickets should be offered at least once a day, coated always with a high-quality vitamin and mineral supplement. Provide a light that emits UVB radiation (2.0- or 5.0-strength bulbs are generally more than enough) and a temperature range between 75 and 85 degrees. The young frogs will grow quickly and by 1 1/2 to 3 months of age, they can be sold.