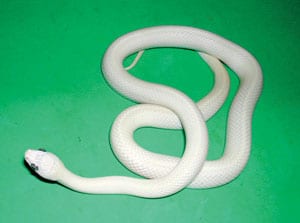 “On Aug. 9, 2007, I produced the first leucistic gray-banded kingsnake. I have been breeding kingsnakes in general and L. alterna in particular for close to 20 years. I achieved this morph by breeding a son to his two sisters and back to his mother. Apparently all four snakes were heterozygous because I produced three leucistic offspring, one in each clutch. Two of those babies died, but the third one is thriving. In 2008 I produced three more. They seem to be doing fine.”